The 2020 ADDM Report on U.S. Autism Prevalence: Three Reasons Why The Popular Narrative Was Misleading 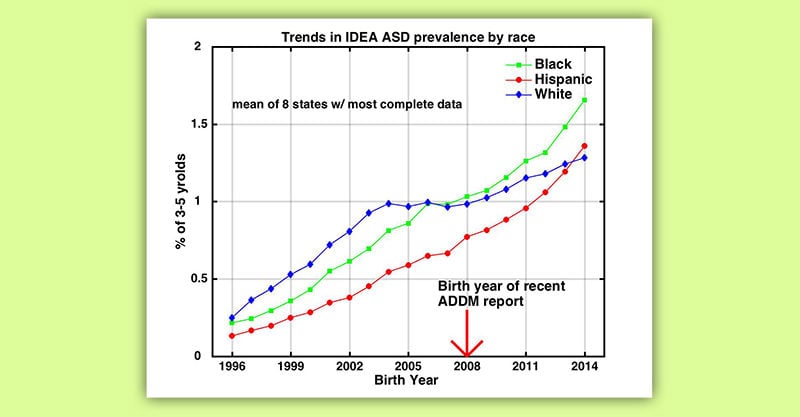 The March 26 release of the CDC’s new Autism and Developmental Disabilities Monitoring (ADDM) Network report drew scarcely a ripple of notice or concern, in a nation consumed with the coronavirus lockdown.  For the last two decades, ADDM has conducted biannual surveillance of autism spectrum disorder (ASD) prevalence among American children.  The new 2020 report found a nationwide ASD prevalence of 1 in 54 among 8 year-olds born in 2008.  (In practice, “nationwide” means an average over selected counties in 11 states.)  The large majority of ASD cases were among boys, whose prevalence was as high as 1 in 20 in New Jersey.

The Associated Press story on the new report attributed the increase to better diagnosis among black children, thereby dispelling concern about what was effectively a 10% increase in prevalence compared to the previous report released in 2018.  (Interestingly, media coverage of that 2018 ADDM report invoked the same explanation to downplay concern over the increase in ASD prevalence from 1 in 68 children born in 2004 to 1 in 59 children born in 2006.)   The March 2020 AP article stated, “Autism has grown slightly more common in the U.S., but a gap in diagnosis of white and black kids has disappeared …  Closure of that gap – thanks to increased screening – is the main reason autism diagnoses are up a little, some experts said.” (All emphasis mine.)

The upbeat narrative is inaccurate and omits some important facts 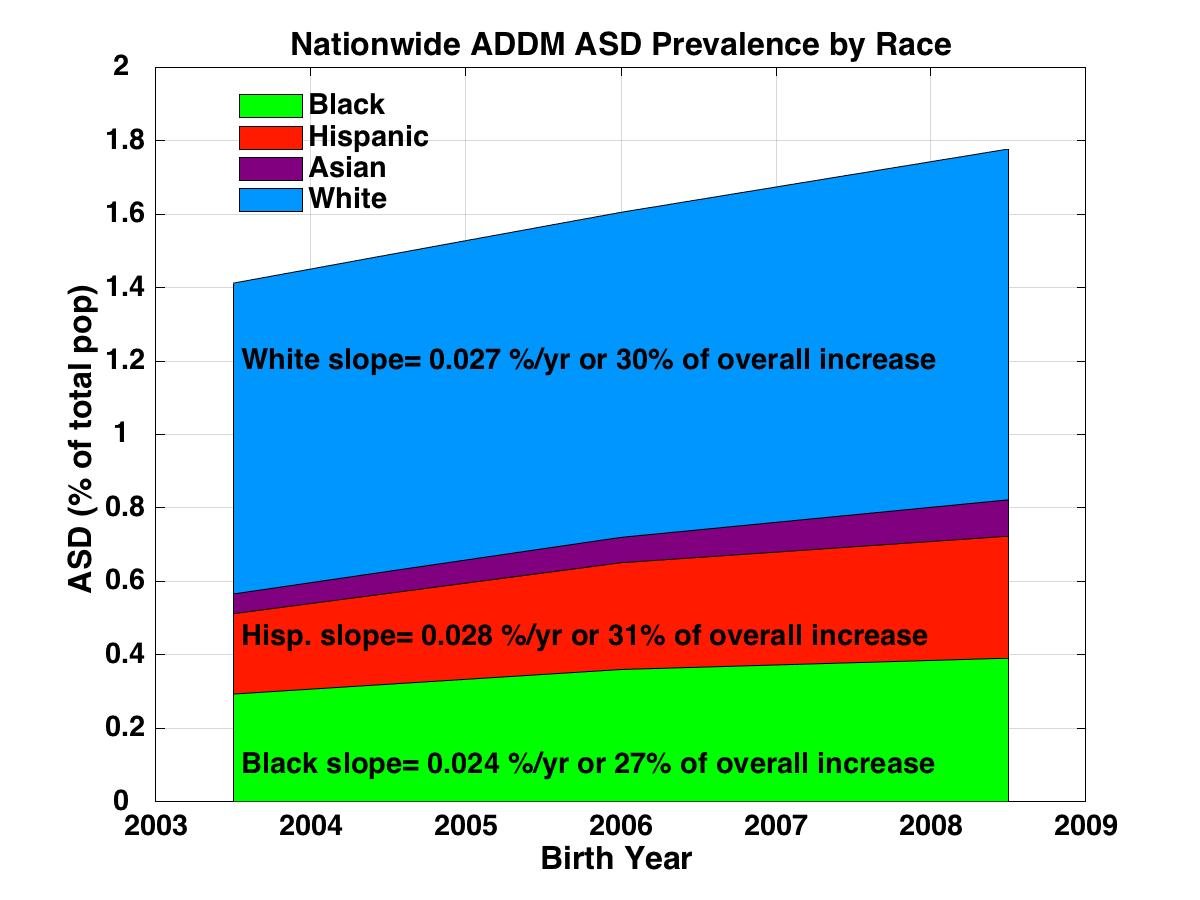 [Figure 1.  The contribution by race/ethnicity to the overall nationwide increase in ASD prevalence (in %) among American 8 year-olds over the last 3 ADDM reports, spanning birth years 2004, 2006 and 2008.]

Second, my recent study with Walter Zahorodny showed that ASD rates among 3-5 year-old minority children were not just “closing the gap,” they were surpassing white rates.  Our study used U.S. Department of Education Individuals with Disabilities Education Act (IDEA) data.   I recently updated the calculations, incorporating IDEA data from 2018-19, and found that the trends we reported in our paper are continuing.  ASD prevalence is increasing fastest among minority children, with overall rates among black children, and now Hispanic children too, exceeding those among white children in the majority of states, even as white rates themselves continue to climb.  In contrast, the AP narrative assumes that there is some natural genetic level of ASD prevalence in the population, that white rates have stabilized at that level, and that minorities are now catching up and will stabilize at a similar level, thanks to improved outreach and screening.  None of those assumptions are supported by the actual available data. 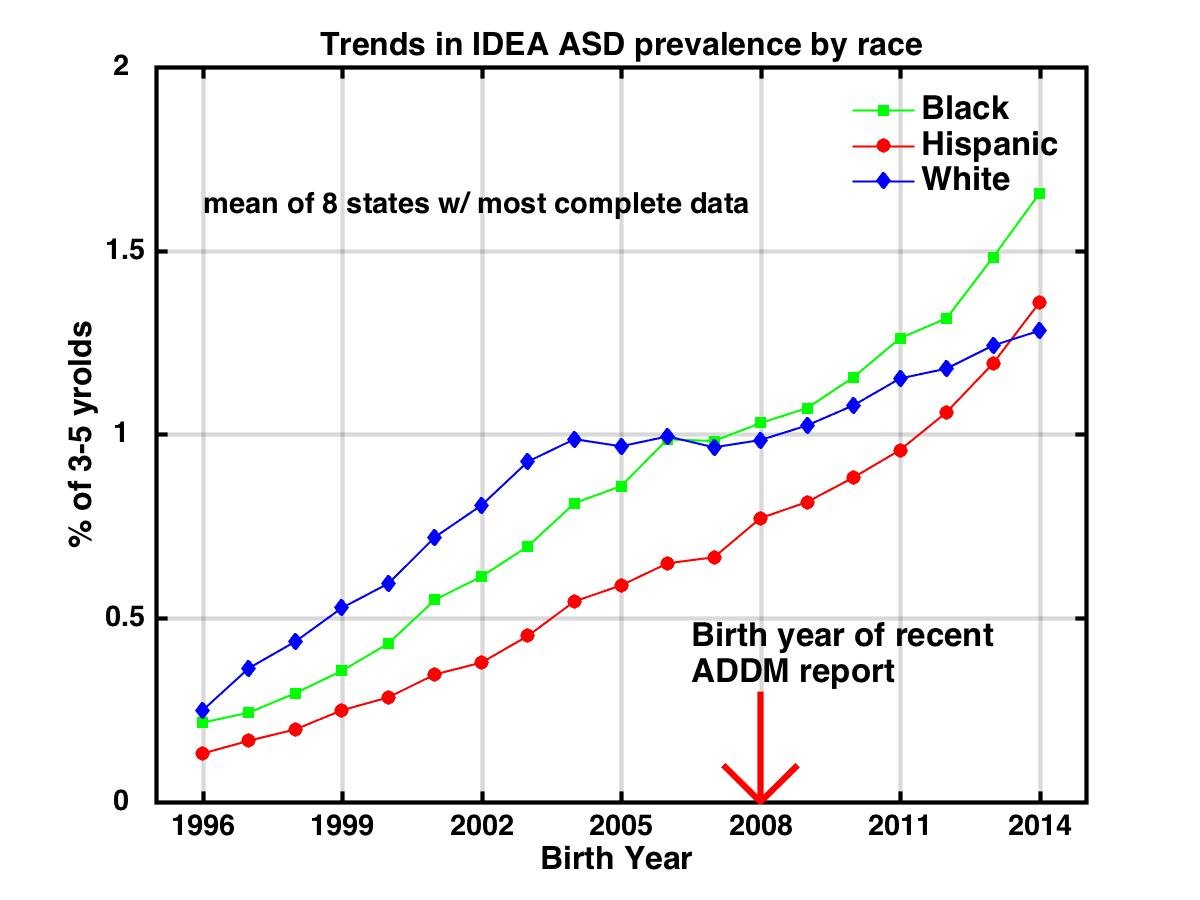 Figure 2.  ASD prevalence by race/ethnicity among 3-5 year-old children in the U.S. Department of Education IDEA dataset (mean of 8 states with highest ascertainment), updated from Nevison and Zahorodny (2019) to include 2018-19 IDEA data.

The third and most objectionable aspect of the narrative surrounding the new ADDM report was the self-congratulatory use of minority children to claim “better diagnosis” while ignoring large disparities in their co-occurring rates of intellectual disability (ID).  Specifically, the AP story portrayed increasing ASD rates among black children as a marker of progress in diagnosing ASD but neglected to mention that their co-occurring ID rate was nearly twice that of white children (47% vs. 27%).  Given that co-occurring ID is a measure of the severity of autism, it is questionable whether black families should be heartened by the increasing ASD rates among their children, as the AP coverage insinuated.

A closer look at ASD with co-occurring ID rates in ADDM data reveals some interesting – and troubling – patterns.  Among children diagnosed with ASD, the fraction with co-occurring ID is substantially higher among black and Hispanic children compared to white children (see Figure 3).  Furthermore, this is a long-standing result known since at least birth year 2002.  Figure 3 also shows that in the earliest ADDM reports, which focused on children born in the 1990s, the overall percentage with co-occurring ID across all races was considerably higher than today but dropped between birth years 1998 and 2002 and has stayed relatively low since then.  This same period, around birth year 2000, coincides with the flattening or even decline of severe autism prevalence among wealthy white and Asian children that William Parker and I identified recently in California Dept. of Developmental Services (DDS) data. These results beg the question: what happened around birth year 2000 that might have caused the California DDS and ADDM co-occurring ID trends? 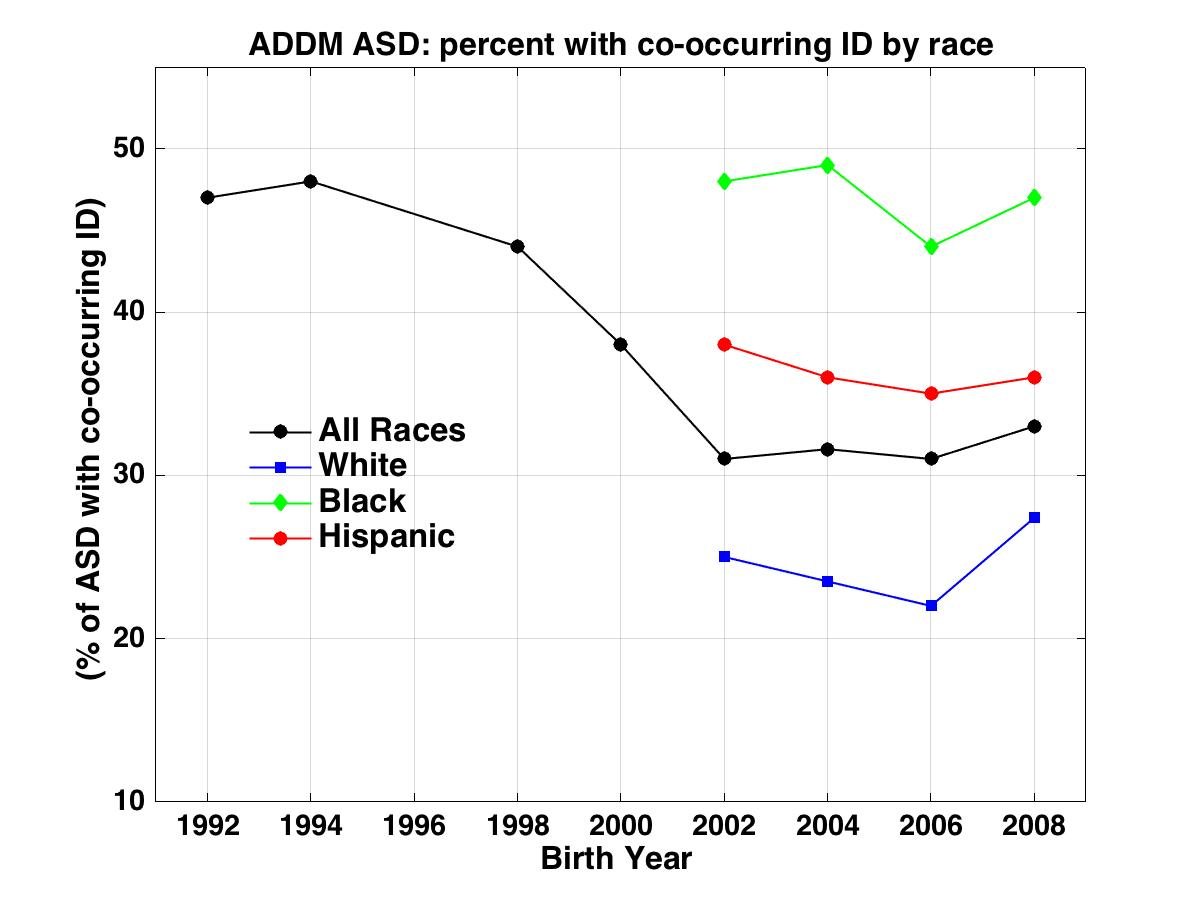 An additional important point is that the absolute prevalence of American children with severe autism (i.e., with co-occurring ID) has been increasing with time, especially among black children (as shown in Figure 4).  This is true, despite the reduction around birth year 2000 in the fraction of ASD cases with co-occurring ID, simply because the absolute prevalence of ASD has increased sharply since the 1990s. 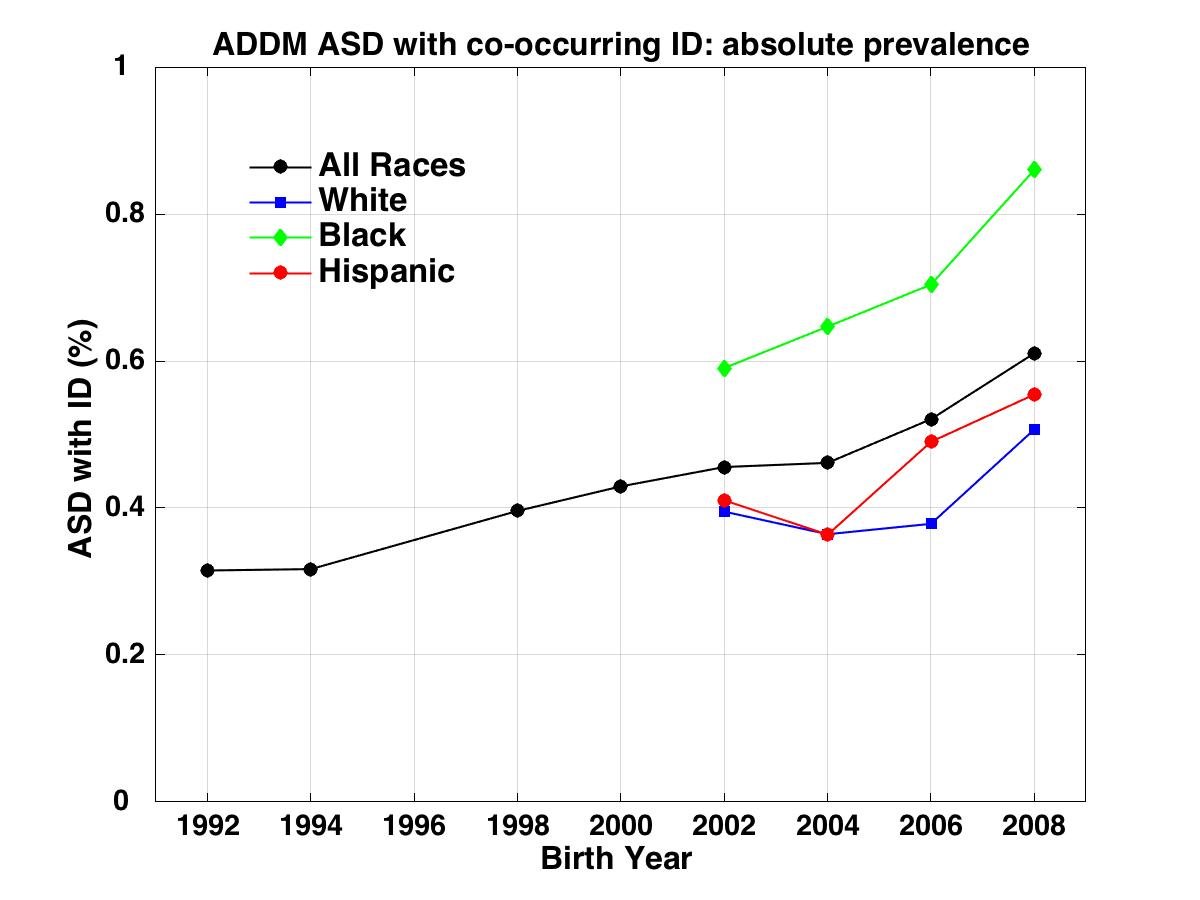 In conclusion, close to a hundred thousand American children per year are being diagnosed with ASD, a generally lifelong condition that profoundly affects their childhood, schooling and ultimately their ability to live and work independently.  It seems reasonable to ask that public health officials stop downplaying the ongoing increase in U.S. ASD prevalence and start taking their own data seriously.  Even a small fraction of the resources currently being devoted to controlling COVID-19 could go a long way toward identifying the environmental causes of ASD, especially severe autism, and provide parents with practical advice on how to prevent it.