Prior to the mid-’90s, Will Harris ran White Oak Pastures the way his father and most other farmers in the country had — “as a very linear, monocultural cattle operation.” In an interview with Joe Rogan, Harris explained how and why he converted his 3,000-acre farm to a “kinder, gentler agriculture.” 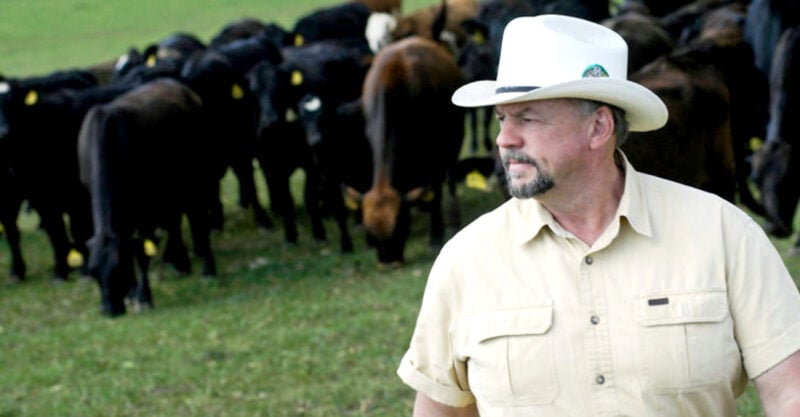 Will Harris is a regenerative farming pioneer who runs White Oak Pastures in Bluffton, Georgia. He produces high-quality grass-fed products, including beef and other animal products, and is an inspirational example of how to convert from conventional to regenerative agriculture and thrive financially.

Prior to the mid-’90s, Harris ran his farm the way his father and most every other farmer in the country had — “as a very linear, monocultural cattle operation,” he says during an episode of “The Joe Rogan Experience,” “The factory farm model.”

While it’s an imperfect emulation, it helps to restore the natural cycles that have been broken by industrial farming.

As noted on the White Oak Pastures webpage:

“Regenerative agriculture is a system of farming principles and practices that seeks to rehabilitate and enhance the entire ecosystem of the farm by placing a heavy focus on soil health with attention also paid to water management, fertilizer use, and more.”

There are major differences in cows raised on grass versus grains. Those fed grass would have a life expectancy of about 20 years, but Harris states that feedlot cows are so unhealthy at slaughter, he doubts they’d live much more than about three years.

“You’re eating an unnaturally obese creature that would never occur in nature and is slowly dying of the same diseases of a sedentary lifestyle, the obesity that’ll eventually kill most of us.”

‘Animal welfare was the canary in the coal mine’

When Harris was in his 40s, he became increasingly aware of the pitfalls of the industrialized model of farming. “Animal welfare was the canary in the coal mine,” he tells Rogan.

He previously believed that “good animal welfare” included keeping the animal well fed and watered, in a comfortable temperature range, and not intentionally inflicting pain and suffering. It’s the definition of animal welfare that many still use today.

Harris realized, however, that true animal welfare involves giving the animal an environment where it can express instinctive behavior. He says:

“Chickens are meant to scratch and peck. Hogs are meant to root and wallow. Cows are meant to … graze. But in the CAFO confined model, those instinctive behaviors are not an option for them.”

He changed his cattle operations after this realization. He also quit feeding the cattle chicken litter, which is chicken feces — a widely used, cheap protein source in feedlots.

“Most of my transition from what I did 25 years ago to what I do today involved just giving up products and techniques,” Harris says, adding that it’s the misapplication of technology that makes agriculture so destructive today. “Reductive science, technology, does not lend itself to living systems.”

In terms of the land, agriculture is misusing cultivation, chemical fertilizers and chemical pesticides, which leads to unintended and unseen changes.

When chemical fertilizers are applied, they lead to noticeable changes in growth, but what you don’t see, Harris explains, “is that fertilizer oxidized the carbon, the organic matter, in the ground. It killed the microbes in the soil. It had other negative chemical impacts, but you couldn’t see them.”

When chemical fertilizers were first widely used, their long-term destruction to the environment was largely unknown. It’s only recently that the importance of soil biology is being recognized.

Before switching to regenerative farming, Harris spent 20 years operating the farm industrially, including using antibiotics and hormone implants to make cows grow faster. But the technologies that industrial agriculture relies on to “improve” food production are destructive.

Further, they’ve allowed agriculture to become scalable to the point that a limited number of multinational corporations control most of the food supply. A centralized food system benefits no one but those who control it, and puts consumers at risk.

“When mega-production facilities that are focused on efficiency break down, consumers’ access to food can become limited, which causes panic. This state of panic allows multinational companies to increase their profits exponentially.

“When the driving goal of our food production system is efficiency, as opposed to resiliency, consumers suffer.”

Meanwhile, Harris says, the way food and fiber are industrially produced causes farming to be “wastefully abundant and seemingly cheap.” Rogan asks Harris if there’s a way to produce the massive amounts of corn, soy and cotton currently produced regeneratively.

Harris responds, “I think it’s the wrong question … it’s a matter of living off of what we can produce. How many T-shirts [from cotton] do you have to have?”

Harris’ farming methods now represent the opposite of the industrialized approach, demonstrating how you can convert conventionally farmed land into a healthy, thriving farm based on regenerative methods. At White Oak Pastures, they’ve:

The industrialization of agriculture destroyed the land, while “centralizing agriculture impoverished rural America,” Harris says. “It caused it to be financially irrelevant. It just wasn’t needed anymore.”

But farming the way Harris does enriches the land and provides jobs for those in the community. He says:

“I’ve got 180 employees. My payroll is $100,000 every Friday in one of the poorest counties in America, and the town has gone from being a ghost town to  becoming a destination.”

Every agricultural county in the U.S. could replicate what Harris is doing to create sustainably grown food and improved communities.

Toward that end, he and his team created the Center for Agricultural Resilience to educate thought leaders on the benefits of building animal, plant and human ecosystems that can nourish communities instead of destroying them.

Harris tells Rogan that he has the utmost respect for vegans and vegetarians who choose not to eat meat because they oppose eating animals. But he’ll give you an ear full if you tell him you won’t eat meat because it’s destroying the planet.

When farming is done regeneratively, it will help to restore the land and even improve the damage done by industrial methods. And animals are an integral, and necessary, part of the restorative process.

In fact, Impossible Foods, maker of fake meat, plant-based “burgers,” claimed they have a better carbon footprint than live animal farms and hired Quantis, a group of scientists and strategists, to prove their point.

According to the executive summary, their product reduced environmental impact between 87% and 96% in the categories studied, including land occupation and water consumption.

This, however, compares fake meat to meat from concentrated animal feeding operations (CAFOs), which are notoriously destructive to the environment and nothing like Harris’ farm.

While the manufactured fake meat reduced its carbon footprint up to 96% in some categories, White Oaks had a net total emission in the negative numbers as compared to CAFO-produced meat.

Further, grass-fed beef from White Oak Pastures had a carbon footprint that was 111% lower than a typical U.S. CAFO, and its regenerative system effectively captured soil carbon, which offset the majority of emissions related to beef production.

“The WOP [White Oak Pastures] system effectively captures soil carbon, offsetting a majority of the emissions related to beef production,” the report stated. “In the best case, the WOP beef production may have a net positive effect on climate. The results show great potential.”

So in addition to a focus on animal welfare, Harris’ regenerative farming methods go beyond sustainable farming to land regeneration. “We believe farming must not only be sustainable, it has to be regenerative to rebuild our soil,” White Oak Pastures’ website reads.

Where to find grass-fed foods

The majority of meat products sold in the U.S. come from CAFOs, not grass-fed farms. To protect the environment and your health, as well as support animal welfare, seek out foods from small farmers using regenerative agriculture practices.

One useful option is to look for the American Grassfed Association logo on meat and dairy, which ensures the animals were born and raised on American family farms, fed only grass and forage from weaning until harvest, and raised on pasture without confinement to feedlots.

You can also get to know a local farmer using regenerative methods near you. Regenerative International, incorporated in 2014, built a global network of regenerative farmers and ranchers, with some 400 affiliates in 60 countries.

You can find a map of these regenerative farms on RegenerationInternational.org to secure a source of sustainable food near you.