The estimates of the percentage of COVID-19 patients who died because they were put on a ventilator range from 30% to 80% — for vast numbers of people, getting intubated was a death sentence. 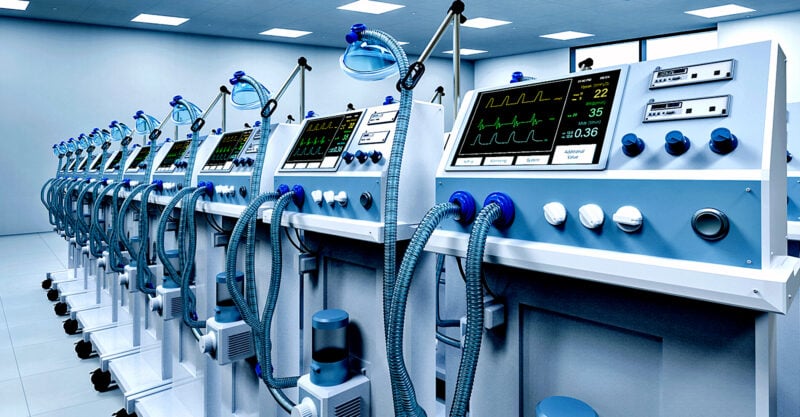 You know the phrase self-aware? It does not apply to Jared Kushner, the former president’s son-in-law.

He somehow weaseled his way into the center of COVID-19 planning in the White House. He dragged along two college buds, Nat Turner and Adam Boehler, two mega-rich kids without a lick of experience in pandemics or public health.

Together with totem Mike Pence, two-lifetime medical bureaucrats Fauci and Birx, plus Pfizer board member Scott Gottlieb, they all came to have a huge influence over the lives, liberty and property of every American.

And they loved every minute, as Kushner’s own book reveals. There are so many things in this book to recount, it’s impossible to discuss the whole thing. I’ve taken on the early lockdown days already.

Here let us discuss the difficult topic of ventilators, which were a huge rage early on until it turned out most of the patients intubated died. Over time, hospitals stopped using them. Now you can snag one on eBay for a few hundred bucks.

What does Kushner know about curing patients of COVID-19? Nothing. But he damn sure presumed that he did.

His first comment on ventilators occurs in Chapter 45, in which he recounts his heroics in getting as many as possible delivered and even produced.

It evidently never occurred to him to ring up a doctor on the front lines to find out if the tool was suitable for the job.

Here is his first mention:

“I knew the federal government kept a strategic stockpile of basic medical supplies. It hadn’t occurred to me that cotton swabs were among them, but of course they were — and each COVID test required at least one cotton swab. We were short on lots of other supplies as well, from gloves and gowns to masks and ventilators.”

In those days, the White House suddenly became consumed with ventilator mania.

“The worst-case scenarios flashed through my mind: nurses and doctors without protective equipment, overflowing hospitals with no beds for patients, ventilator shortages forcing doctors to choose who would live and who would die, limited ability to detect new outbreaks due to the testing supply shortage, and tens of millions of Americans stuck in their homes,”

So for reasons unknown, ventilator frenzy swept the White House and every governor’s office, starting of course in New York.

They all quickly came to believe that intubation was the key to curing everyone — and without the slightest evidence. Just get those tubes down throats and all is well.

“At that time, the medical experts still believed that ventilators were the most critical medical device available for saving lives. Doctors used them on patients whose virus-ravaged lungs could not supply their bodies with enough oxygen. As cases of COVID-19 skyrocketed, every governor in America demanded the largest possible share of the federal stockpile’s diminishing supply. They didn’t know how many they would need, but they feared that the stockpile would run out, so they requested as many as they thought they could get from us.”

Who these “medical experts” were he does not say. But regardless, they went bonkers on trying to get them.

“Amid the flood of competing requests, we needed to create a process to allocate this scarce resource. Nat Turner recruited Blythe Adamson from Turner’s former company, Flatiron Health, to help our team estimate how many ventilators, ICU beds, and other critical medical supplies America would need.”

Remarkable! Now we have the modelers involved!

“Based on the current trajectory, her numbers also showed that we would need 130,000 ventilators in two weeks. I shuddered at the possibility. Until that moment, I thought the worst of the supply crisis was behind us. All the PPE in the world wouldn’t matter much if we ran out of ventilators for critically ill patients…. There was no chance we could procure or manufacture anywhere close to 130,000 ventilators in two weeks. We were staring at the possibility of two football stadiums full of preventable deaths.”

All of this was sheer fantasy. And highly dangerous too. The estimates of the percentage of people who died from ventilation range from 30% to 80%. For vast numbers of people, getting intubated was a death sentence.

What’s more, people on the ground have reported that the only reason for the ventilation craze was the fear that other methods of getting people oxygen would spread COVID-19. So it all comes back to the disease panic that drove the intubation craze to begin with.

“Doctors could have employed other kinds of breathing support devices that don’t require risky sedation,” reported the WSJ, “but early reports suggested patients using them could spray dangerous amounts of virus into the air.”

Amazing: it wasn’t about saving the patient’s life but rather about the wild obsession with, once again, stopping the spread even if it meant killing the infected.

The White House team managing this had no clue. Someone whispered “ventilators” and there was no turning back.

“FEMA was receiving increasingly panicked calls from governors requesting ventilators. In addition to Cuomo’s demand, John Bel Edwards of Louisiana sought 5,000, Phil Murphy from New Jersey asked for 2,300, and Gretchen Whitmer of Michigan and Ned Lamont of Connecticut wanted thousands as well. Put together, these requests far exceeded the number still in the national stockpile. Everyone was terrified. White House chief of staff Mark Meadows got a call from a hospital CEO in his former congressional district who requested 150 ventilators. At that time, there were no reported COVID-19 cases within a thirteen-county radius of the hospital. Meadows asked why the ventilators were needed. “We’re just scared,” the CEO admitted. It was one of many examples of panic-induced hoarding, which exacerbated the supply shortages.”

But of course there were no shortages; only models predicted shortages based on very dangerous medical presumptions. Kushner never considered this possibility.

Maybe the whole trajectory was bonkers to begin with?

There was no one in the White House who was in a position to say: “Hey, hold on here, do we even know what the best therapies might be? Is there someone we can call?”

Nope, they just barrelled from one insane mania to another, as if being in charge is somehow better than being right.

Kushner finally ended up rationing the number of ventilators he would approve to go to various states and pointed out to the press that he could never achieve the goal of satisfying everyone.

After that, he was slaughtered by the press for not magically producing a million ventilators that would have been necessary, even though these machines were killing people left and right.

What’s the lesson here that Kushner takes away?

“The intensity and volume of the media’s vitriolic outrage caught me off guard. But I didn’t have time to dwell on anything but the crisis at hand. Requests continued to pour in. At our lowest point, we had just twelve hundred ventilators in the stockpile. The only good news was that our ‘15 Days to Slow the Spread’ guidelines were making a difference. The growth in hospital usage rates was slowing, and our efforts to purchase every available ventilator we could find were beginning to pay off.”

There you have it: he pats himself on the back that his chosen method of lockdowns was somehow realizing the goal. Talk about confirmation bias. There is no evidence that one word of the above was true. Lockdowns achieved nothing but destruction. If he is sincere, he remains blissfully unaware.

Nowhere in this terrifying chapter does he happen to mention that intubating patients was not working and that they were killing people who otherwise would have lived. It’s not even clear that even today he knows this. Probably he has never googled the subject.

He did the same with 3M with masks: make them or face the state!

This is not free enterprise. This amounts to nationalizing companies by presidential edicts. All for more killer ventilators and masks that have proven nowhere effective.

The demand became so high that by April 2020, international news was reporting on fake ventilators being shipped all over the world, from China. They didn’t work. They killed people even more than those that worked.

That’s how insane things became, in part fueled by the arrogance of Kushner — who recently told an interviewer that he believes he will live forever on this earth — and his inexperienced know-it-all team of college buddies. Lives were on the line. This is who was in charge. To this day, they write books on their own heroics. And get royalties on purchases.

What to do with such a person? It seems obvious. Never let a person like this get anywhere close to power again. Ever.

Jeffrey A. Tucker is the founder and president of the Brownstone Institute, an economist and author.