8,817 COVID Vaccine Injuries Reported to CDC Among Kids 5 to 11, as Study Shows Pfizer Vaccine Only 12% Effective in That Age Group 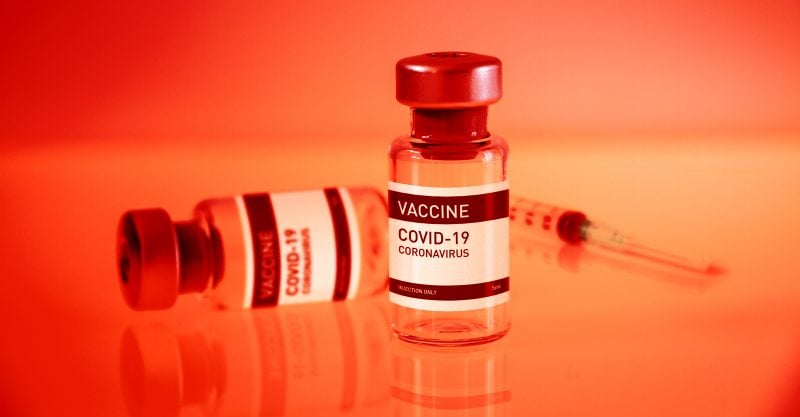 2The Centers for Disease Control and Prevention (CDC) today released new data showing a total of 1,151,450 reports of adverse events following COVID vaccines were submitted between Dec. 14, 2020, and Feb. 25, 2022, to the Vaccine Adverse Event Reporting System (VAERS). VAERS is the primary government-funded system for reporting adverse vaccine reactions in the U.S. 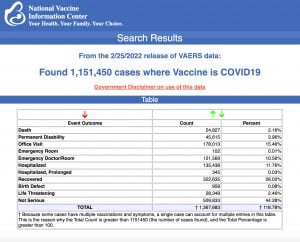 8,817 adverse events, including 200 rated as serious and 4 reported deaths.

The most recent death involves an 8-year-old boy (VAERS I.D. 2109625) from Mississippi who died 7 days after his second dose of Pfizer’s COVID vaccine when he was found blue and lifeless at home.

He was taken to the hospital with a full code in process. A pulse was detected several times, but the boy ultimately died in the ICU. It was reported to the doctor who filed the report that the boy died from multisystem inflammatory syndrome. He did not have COVID.

The most recent death involves a 13-year-old girl (VAERS I.D. 2115839) from Wisconsin who was severely compromised and received two doses of Pfizer’s COVID vaccine. Although the cause of death wasn’t clear, she appeared to have significant health issues, respiratory distress and heart problems.

Pfizer vaccine only 12% effective in kids 5 to 11, study says

A study released Monday showed the effectiveness of Pfizer’s COVID vaccine in 5- to 11-year-olds was only 12% after a seven-week period of observation. Yet, the authors of the study still recommended the vaccine for that age group, stating it was protective against severe disease.

A study released Monday showed the effectiveness of Pfizer’s COVID-19 vaccine in 5- to 11-year-olds was only 12% after a 7-week period of observation. According to New York Times, federal health officials knew about the findings since early February.https://t.co/yW33Z7JePh

They also proposed the recommended dose for 5- to 11-year-olds was too small, suggesting a higher dose might solve the problem.

Some scientists at the CDC and FDA pushed for the data to be made public before an FDA meeting, scheduled for Feb. 15, to review Pfizer’s application for Emergency Use Authorization of a three-dose regimen of its vaccine for infants and children 6 months to 5 years old — but the study’s findings were only made public this week.

The FDA on Feb. 11 abruptly postponed the meeting to review Pfizer’s application for infants and children under 5, stating Pfizer didn’t have enough data on the efficiency of a third dose for that age group.

In an article published March 1, Dr. Madhava Setty, senior science editor at The Defender, examined the data in the study and outlined two flaws in the authors’ conclusions: 1) that the vaccines prevent severe disease in this age group, and 2) that increasing the dose might be appropriate.

A whistleblower lawsuit alleging fraud during Pfizer’s COVID vaccine trials is moving forward, after a district court judge unsealed the complaint, including 400 pages of exhibits.

A whistleblower lawsuit alleging fraud during Pfizer’s COVID vaccine trials is moving forward, after a district court judge unsealed the complaint, including 400 pages of exhibits.https://t.co/qgNImhN5Ov

Jackson worked for Ventavia for a brief period in 2020, before being fired after she filed a complaint with the FDA over alleged indiscretions she observed during the vaccine trials.

She also gave The BMJ a cache of internal company documents, photos and recordings highlighting alleged wrongdoing by Ventavia.

Jackson filed the complaint in the U.S. District Court, Eastern District of Texas, Beaumont Division, under the False Claims Act.

The lawsuit includes several charges of fraud and retaliation on the part of both Ventavia and Pfizer. The complaint remained under seal until Feb. 10, when U.S. District Court Judge Michael Truncale ordered it unsealed.

Husband of woman who died from J&J shot speaks out

The husband of an Oregon woman who died last year from a blood-clotting disorder — two weeks after receiving J&J’s COVID vaccine — spoke out publicly this week about his wife’s death.

U.S. health officials continue to say blood-clotting disorders like one that killed 52-year-old Monica Melkonianare two weeks after the J&J vaccine are rare — despite thousands of vaccine-induced blood-clotting events reported to CDC.https://t.co/QqgqgJY6tE

Monica Melkonian, 52, received her J&J shot at a vaccination clinic on April 7, 2021 —  the same day the CDC and FDA temporarily paused the vaccine to investigate reports of a rare blood-clotting disorder called vaccine-induced thrombotic thrombocytopenia.

Melkonian’s most notable symptoms included a persistent headache and pain behind her left eye before she experienced a seizure, stroke and ultimately died from the condition.

To date, the U.S. has confirmed only nine deaths due to VITT caused by the J&J shot and 54 cases of blood clotting conditions among J&J recipients, despite thousands of cases reported to VAERS.

More Israelis are experiencing injuries and reactions following COVID booster shots than the country’s passive reporting system shows, according to a survey conducted by the Israeli Ministry of Health (MOH).

The MOH conducted an active survey of booster shot recipients to collect data on adverse events associated with booster doses, then compared the survey data to the data available from the country’s passive reporting system.

Out of 4,000 people who participated in the survey, results showed six of 2,049 respondents were admitted to the hospital following the booster shot, and a significant number of people reported worsening of their underlying health conditions.