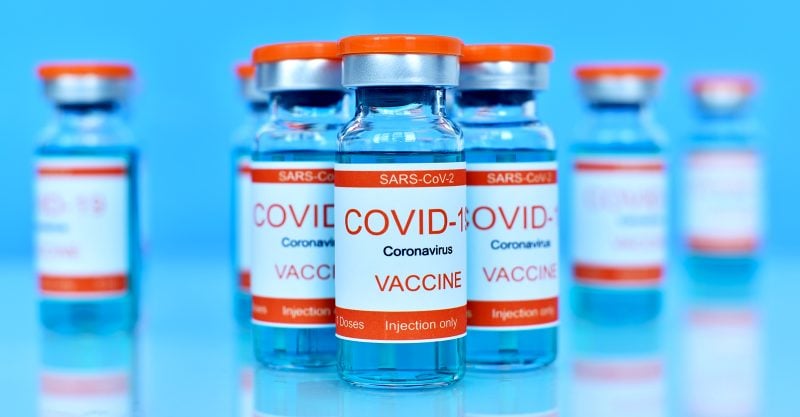 Data released Friday by the Centers for Disease Control and Prevention (CDC) showed that between Dec. 14, 2020 and Oct. 8, 2021, a total of 798,636 adverse events following COVID vaccines were reported to the Vaccine Adverse Event Reporting System (VAERS). The data included a total of 16,766 reports of deaths — an increase of 456 over the previous week, and two more reports of teens who died after being vaccinated.

There were 117,399 reports of serious injuries, including deaths, during the same time period — up 5,478 compared with the previous week. 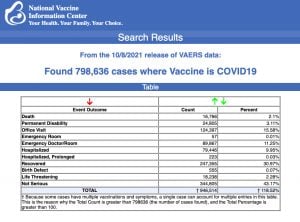 The most recent death involves a 15-year-old male who died six days after receiving his first dose of Pfizer’s COVID vaccine. According to his VAERS report (VAERS I.D. 1764974), the previously healthy teen complained of brief unilateral shoulder pain five days after receiving his COVID vaccine. The next day he played with two friends at a community pond, swung on a rope swing, flipped into the air, and landed in the water feet first. He surfaced, laughed and told his friends “Wow, that hurt!” He then swam toward shore underwater, as was his usual routine, but did not re-emerge.

Another recent death includes a 16-year-old female (VAERS I.D. 1757635) who complained of fatigue and died one day after receiving Pfizer’s COVID vaccine.

According to CNBC, an advisory panel to the U.S. Food and Drug Administration (FDA) today unanimously voted to recommend J&J’s single-dose COVID vaccine to the more than 15 million Americans who have already received the first dose.

The panel recommended boosters for everyone 18 and over, at least two months after they received the first dose.

Many committee members said it should be considered a two-dose vaccine, much like the Moderna and Pfizer vaccines.

On Thursday, the FDA’s advisory panel unanimously recommended booster doses of Moderna’s COVID vaccine for Americans 65 and older and those at high risk of severe illness or occupational exposure to the virus, Reuters reported.

“The data itself is not strong, but it is certainly going in the direction that is supportable of this vote,” said Dr. Patrick Moore of the University of Pittsburgh School of Medicine. Moore said he voted in favor of Moderna boosters based largely on a “gut feeling rather than truly serious data.”

If the FDA signs off on the panel’s recommendation for booster doses of J&J and Moderna’s COVID vaccines, the CDC will make specific recommendations on who should get the shots. The CDC’s vaccine advisers are scheduled to meet next week.

White House tells governors to get ready to vaccinate young kids, even though FDA hasn’t approved it

In a private phone call Tuesday with the nation’s governors, the White House told states to prepare to vaccinate children as young as 5 by early November, even though the FDA has not yet granted Emergency Use Authorization for COVID vaccines for the 5 to 11 age group.

According to NBC News, the Biden administration purchased 65 million pediatric doses of the Pfizer/BioNTech vaccine — enough to vaccinate an estimated 28 million children who would be eligible should the FDA approve Pfizer’s request to vaccinate the younger age group.

The administration told providers last week the vaccine for children will be delivered to thousands of sites, including states, pharmacies, schools and medical groups within one week of FDA authorization. The pediatric Pfizer vaccine will be one-third of what is given to adults.

Joshua and Alexandra Price took their four-year-old son and five-year-old daughter to a Walgreens in Indiana for the flu shot a week ago, but the children and parents were all mistakenly given the Pfizer COVID vaccine, The Hill reported.

The parents say their children, Sophia and Lukas, are experiencing side effects from the vaccine — which is only approved for ages 12 and older — including fever, body aches, cough, headache and nausea. The children received a dose three times higher than is being tested for children in clinical trials.

For the parents, Peter Hotez, dean of the National School of Tropical Medicine at Baylor College of Medicine, told CNN, the COVID shot would essentially be a booster shot since the parents were already vaccinated back in April.

According to an article published in Medscape Oct. 14, Parsonage-Turner syndrome (PTS) has been highlighted as a potential adverse effect of mRNA COVID vaccines in a recent pharmacovigilance monitoring report from the French National Agency for the Safety of Medicines and Health Products (ANSM).

PTS is a rare condition characterized by the sudden onset of severe shoulder pain, followed by arm paralysis. The reaction appears to be more common in men than in women.

Six serious cases of the syndrome related to the Pfizer’s Comirnaty vaccine were reported since the start of the monitoring program, with four cases occurring from Sept. 3 and 16.

All six cases associated with Pfizer’s vaccine involved patients 19 to 69 years old two women and four men — who developed symptoms within 50 days after vaccination. Half of the cases occurred after the first dose and half after the second. Four patients are currently recovering, and the outcomes of the other two are unknown.

This timing indicates a possible link between the syndrome and the vaccine, the report stated. A third case occurred more than 50 days after vaccination.

This signal of mRNA vaccines is now “officially recognized,” according to the report. It is also considered a “potential signal” of the AstraZeneca vaccine, according to a pharmacovigilance report, released Oct. 8, which describes eight cases of PTS after vaccination.

As The Defender reported Oct. 12, new data from King County, Washington — which contains some of the country’s most detailed COVID data — showed risks for unvaccinated children look similar to the risks for vaccinated people in their 50s.

According to The New York Times, nationwide statistics from the UK showed an even larger age gap. Unvaccinated children under 12 appeared to be at a lower risk of COVID infection than vaccinated people in their 40s, if not 30s. 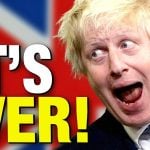 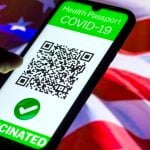