The authors of a new review of the drug acetaminophen (paracetamol), sold under the brand names Tylenol and Panadol, are sounding the alarm about the use of the drug in infants and children, citing the drug’s association with autism spectrum disorder (ASD). 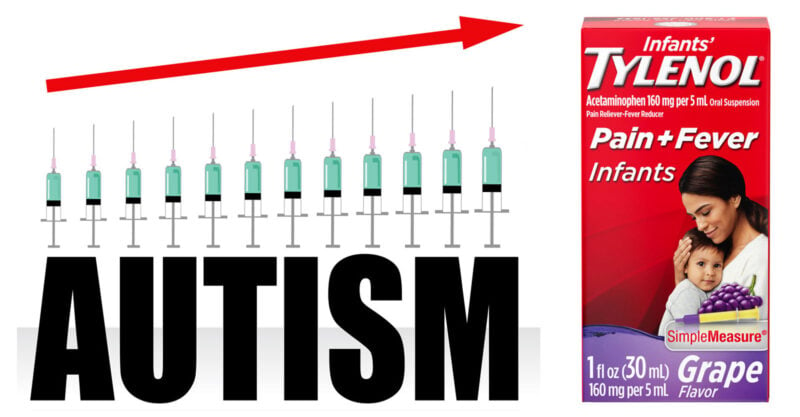 The authors of a new review of the drug acetaminophen (paracetamol), sold under the brand names Tylenol and Panadol, are sounding the alarm about the use of the drug in infants and children, citing the drug’s association with autism spectrum disorder (ASD).

“Our study shows that acetaminophen would never be approved for pediatric use by today’s regulatory standards,” Dr. William Parker, of WPLab, Inc., who led the research team that conducted the review on acetaminophen and autism, told The Defender.

The review, published in the July issue of Minerva Pediatrics, offers 17 lines of evidence that the commonly used remedy for pain and fever may be contributing to the autism epidemic.

The authors said their findings could have huge implications for preventing ASD, as acetaminophen is used so much in young children — in some populations, up to 90% of children receive acetaminophen in their early years.

The rate of ASD has skyrocketed in the last 40 years, and now affects 1 in 40 U.S. children.

Acetaminophen became the drug of choice to treat fevers and pain in children in the early 1980s, after aspirin was associated with Reye’s syndrome.

However, the use of acetaminophen in infants and children was never shown to be safe for neurodevelopment.

“The belief that acetaminophen is safe for children is an assumption based on the fact many studies show it does not cause liver damage in children when used at an appropriate dose,” said Parker.

Parker and his colleagues previously conducted a systematic review, published in February in the European Journal of Pediatrics, which showed the studies claiming acetaminophen is safe for children did not examine the effect of the drug on neurodevelopment — even though the brain is one of the primary target organs for the drug’s therapeutic effect.

There is little research on the effect of postnatal exposure to acetaminophen.

However, according to the study, “circumstantial evidence regarding postnatal exposure to the drug is abundant, and includes at least three otherwise unexplained temporal relationships, data from laboratory animal studies, several miscellaneous and otherwise unexplained correlations, and a lack of alternative suspects that fit the evidence-derived profile.”

Based on this evidence, the authors “concluded without any reasonable doubt” that postnatal exposure to acetaminophen for children at risk is “responsible for many if not most cases of ASD.”

The key to understanding the role of acetaminophen in ASD is that acetaminophen alone does not trigger ASD — the negative impact happens in the presence of oxidative stress, according to Parker and his colleagues.

Oxidative stress is an imbalance of free radicals and antioxidants in the body that can lead to cell and tissue damage.

The body’s cells produce free radicals during metabolism, the chemical reactions that produce energy in our cells. These free radicals cause damage to cells and contribute to chronic illnesses and the aging process.

Unlike many drugs, some of the acetaminophen an individual takes is converted by the body into a highly toxic metabolite, N-acetyl-p-benzoquinone imine (NAPQI).

Usually, NAPQI is rapidly neutralized (rendered harmless) by glutathione, and because most healthy children have lots of glutathione, they aren’t harmed by NAPQI.

However, under conditions of oxidative stress, glutathione is depleted so the body can’t adequately remove the NAPQI. Left unremoved, the NAPQI reacts with a wide range of proteins, causing permanent damage to the proteins and associated cells.

Many babies and children are exposed to excessive oxidative stress through a variety of environmental and genetic factors including infection, treatment with antibiotics, vaccination, psychological stress, jaundice, heavy metals, problems with vitamin B metabolism, EMF exposure, exposure to cigarette smoke or air pollution and exposure to organophosphates.

When a child develops a fever after receiving a vaccine, it’s an indication the child is experiencing oxidative stress. Giving acetaminophen to a child in the throes of oxidative stress increases the child’s risk of developing ASD, according to Parker.

First indication that acetaminophen might be associated with ASD

Parker told The Defender the first indication that acetaminophen might have a negative impact on neurodevelopment came from the work of Dr. Stephen Schultz, who watched his child regress into ASD in 1996, after routine childhood vaccination followed by giving his child acetaminophen.

After his son’s “slow slide” into autism, Schultz left his established dentistry practice and went on a journey to find out what happened to his child, earning a Ph.D. in the process.

In 2008, Schultz and a number of distinguished scientists, then at the University of California, San Diego and at San Diego State University, published a small survey study that showed a six-fold increased risk of ASD in 1-to 5-year-old children when routine childhood vaccines were accompanied with acetaminophen versus ibuprofen.

“Unfortunately,” Parker said, “Schultz’s study was ignored for almost a decade.” The study was criticized for being small.

Parker conceded a study like this, taken in isolation, does not seem persuasive. However, he said, it should be considered as just one piece of the big picture of what is causing the dramatic increase in ASD.

As Jennifer Margulis, Ph.D., wrote in her Substack post on Parker’s paper, “In a nutshell, it’s impossible to see a big picture with a scientific microscope.”

A narrative review of the evidence

The goal of Parker’s latest study was to pull together the many pieces of evidence in order to better understand the big picture.

The study is a narrative review that presents the 17 lines of evidence suggesting acetaminophen is associated with ASD and examines the alternative explanations.

Highlights from the review include:

• Acetaminophen use in pregnancy is neurotoxic to babies, with long-term effects that include lower IQ, increased ASD and increased ADHD. The authors conclude if babies can be harmed by acetaminophen in utero, it’s unreasonable to think they couldn’t also be harmed by the drug after birth.

• Studies on rats and mice showed acetaminophen causes long-term brain damage, and this early exposure to the drug was at doses that are similar to or even less than doses received by human babies and children. An alternative explanation is that rat and mouse pups are more sensitive to acetaminophen than human babies. However, the authors point out that lab animals are often less sensitive to toxins, such as the heavy metal lead and the insecticide DDT.

• The incidence of ASD began to increase in the early 1980s, coinciding with the discovery aspirin was associated with Reye’s syndrome and the resulting switch from using aspirin in children to using acetaminophen.

The authors argue this was not a coincidence.

• The incidence of ASD steadily increased in the U.S., after the U.S. Food and Drug Administration (FDA) eased restrictions on direct-to-consumer advertising in 1997. That, and other factors, may have increased the use of pharmaceutical products.

• The circumcision of baby boys is associated with a dramatic increase (50%) in the risk for early-onset ASD. Acetaminophen is frequently used to relieve pain caused by circumcision.

• The combination of the measles-mumps-rubella (MMR) vaccine with the use of acetaminophen is associated with higher risk of ASD than MMR vaccination alone. “Many parents believe that their children’s ASD was induced by a vaccine based on their own observations or the observations of trusted social networks.”

However, the authors argue the vaccination caused oxidative stress. The subsequent administration of acetaminophen — not the vaccine — then triggered the ASD.

• People with cystic fibrosis, who are unusually efficient at metabolizing acetaminophen, have a low incidence of ASD.

• In South Korea, where acetaminophen-containing products were repeatedly found to contain amounts of the drug exceeding the package label, researchers found an unexpectedly high prevalence of ASD.

What can parents do instead? Alternatives to acetaminophen

What will it take to change the authorization of acetaminophen for children or at least get a black box warning on the drug?

Parker contacted the FDA, but said, “The way the tide was turned with aspirin and Reye’s Syndrome was through grassroots efforts.”

In the meantime, the narrative review by Parker and his colleagues is there for parents and caregivers who want to review the evidence and decide for themselves if acetaminophen is worth the risk for babies and young children.

“In my experience, with very rare exceptions, parents who are aware of the available evidence will avoid giving acetaminophen to their babies and children,” said Parker.

Unlike some potential causes of autism, acetaminophen is one risk factor that parents, caregivers and physicians can often eliminate with ease, Parker said.

For parents looking for alternatives to treat fevers in children, Parker recommended the “Treating a Fever Without Medicine” resource from the American Academy of Pediatrics, with tips such as offering plenty of fluids and sponging the child.

Margulis suggested a range of natural remedies to treat pain and fever in children.

Updated: This article was updated to state that the authors are sounding the alarm about the use of Tylenol in infants and children, but did not call for an immediate end to its use.