Tucker Carlson: Either the Vaccines Work. Or They Don’t.

Fox News commentator Tucker Carlson says health officials can’t have it both ways — either the vaccines are “highly effective” and the fully vaccinated can stop wearing masks and self-isolating, or the vaccines don’t work. 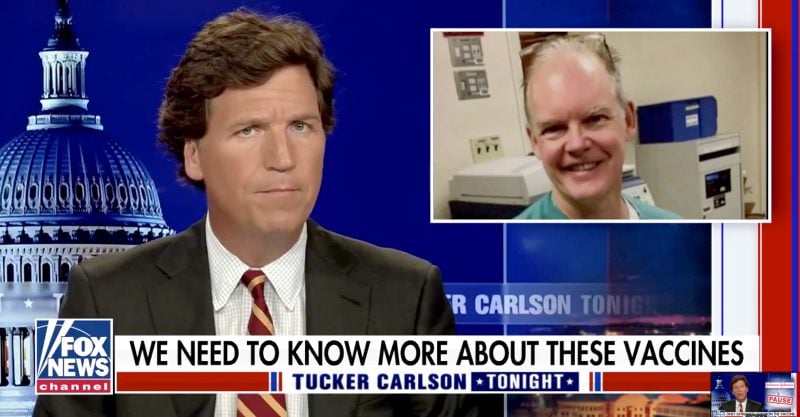 In the segment below on last night’s “Tucker Carlson Tonight,” the Fox News commentator said there are two things the public wants to know about COVID vaccines “and neither has anything to do with how many professional athletes or Netflix stars have been vaccinated.”

People want to know: Are the vaccines safe? And, are they effective?

Carlson said the public was assured the vaccines are safe, that the risks were so small we could ignore them completely. In fact, we were told that the clinical trials revealed “no evidence at all” that the vaccines could cause any life-threatening injuries, Carlson said.

But after Tuesday’s decision by federal health officials to shut down the Johnson & Johnson vaccine rollout — because six people experienced blood clots, including one who died — Carlson had a lot of questions.

And those questions aren’t being answered by federal health officials, who are sending a lot of mixed messages these days, Carlson explained.

What about the question of effectiveness, Carlson asked.

After being told that everyone must get the vaccine, the rollout is “more important than the moon shot,” health officials are telling people even if they’re fully vaccinated, they must avoid crowds and wear masks.

“That’s not what we expected at all,” Carlson said. “If the vaccines work, why are the vaccinated still banned from living normal lives?”

It’s a “legitimate public health mystery,” Carlson said, adding: “Either it works, or doesn’t. But it can’t be simultaneously ‘highly effective’ and at the same time not restore people’s lives to normal.”

As for journalists asking these questions on behalf of the public, forget it, Carlson said. “Journalists have decided their job is to enforce the regime’s rules, no matter how often those rules change.”