In 7 days, on Nov. 16, Robert F. Kennedy, Jr.’s book — “The Real Anthony Fauci: Bill Gates, Big Pharma, and the Global War on Democracy and Public Health” — will be released. Pre-order your book today. 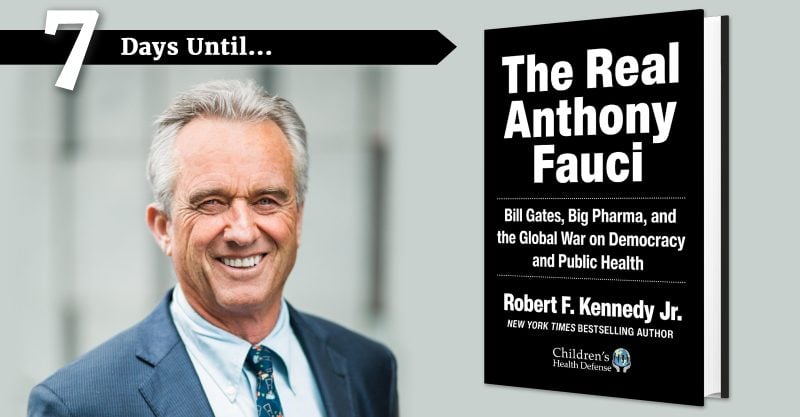 Read the two excerpts below for a glimpse into how Dr. Anthony Fauci and Bill Gates orchestrated a pandemic response guaranteed to destroy America’s middle class and engineered the largest upward transfer of wealth in human history.

During the COVID pandemic, Dr. Fauci served as ringmaster in the engineered demolition of America’s economy. His lockdown predictably shattered the nation’s once-booming economic engine, putting 58 million Americans out of work, and permanently bankrupting small businesses, including 41 percent of Black-owned businesses, some of which took generations of investment to build.

The business closures contributed to a run-up in the national deficit — the interest payments alone will cost almost $1 trillion annually. That ruinous debt will likely permanently bankrupt the New Deal programs — the social safety net that, since 1945, fortified, nurtured and sustained America’s envied middle-class.

The very Internet companies that snookered us all with the promise of democratizing communications made it impermissible for Americans to criticize their government or question the safety of pharmaceutical products; these companies propped up all official pronouncements while scrubbing all dissent.

The same Tech/Data and Telecom robber barons, gorging themselves on the corpses of our obliterated middle class, rapidly transformed America’s once-proud democracy into a censorship and surveillance police state from which they profit at every turn.

CEO Satya Nadella boasted that Microsoft, by working with the CDC and the Gates-funded Johns Hopkins Center for Biosecurity, had used the COVID pandemic to achieve “two years of digital transformation in two months.”

Ellison, Gates, and the other members of this government/industry collaboration used the lockdown to accelerate construction of their 5G network of satellites, antennae, biometric facial recognition, and “track and trace” infrastructure that they, and their government and intelligence agency partners, can use to mine and monetize our data, further suppress dissent, to compel obedience to arbitrary dictates, and to manage the rage that comes as Americans finally wake up to the fact that this outlaw gang has stolen our democracy, our civil rights, our country, and our way of life—while we huddled in orchestrated fear from a flu-like virus.

With fears of COVID generously stoked, the dramatic and steady erosion of constitutional rights and fomenting of a global coup d’état against democracy, the demolition of our economy, the obliteration of a million small businesses, the collapsing of the middle class, the evisceration of our Bill of Rights, the tidal wave of surveillance capitalism and the rising bio-security state, and the stunning shifts in wealth and power going to a burgeoning oligarchy of high-tech Silicon Valley robber barons seemed, to a dazed and uncritical America, like it might be a reasonable price to pay for safety.

And anyway, we were told, it’s just for 15 days, or maybe 15 months, or however long it takes for Dr. Fauci to “follow the data” to his answer.

Want to know more about the man behind the mask? Pre-order your copy today.