“The Real Anthony Fauci,” a full-length feature documentary based on Robert F. Kennedy, Jr.’s runaway bestseller, will be available to watch free — for 10 days only — beginning Oct. 18 at 12:01 a.m. Eastern. 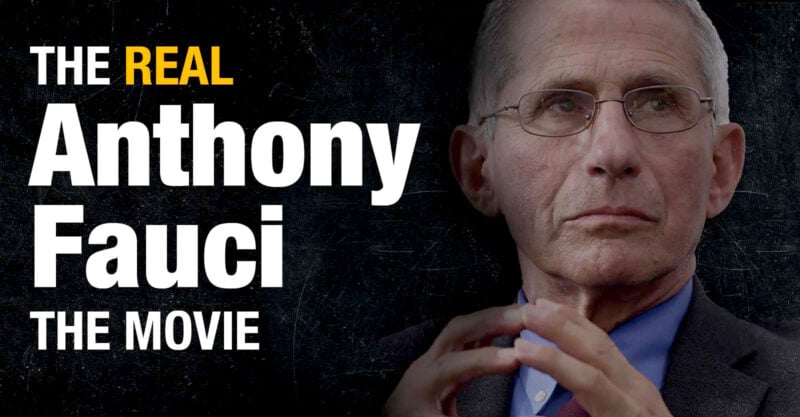 “The Real Anthony Fauci,” a full-length, two-part feature documentary based on Robert F. Kennedy, Jr.’s runaway bestseller — “The Real Anthony Fauci: Bill Gates, Big Pharma, and the Global War on Democracy and Public Health” — will be available to watch free, for 10 days only, beginning Oct. 18 at 12:01 a.m. Eastern.

Register here to watch the documentary.

It also examines the relationship between Big Pharma and the military, the outsized power of the news media and the concentration of technology companies.

The documentary’s launch follows in the wake of Fauci’s Sept. 21 admission that he was aware the “draconian” COVID-19 policies he dictated would have negative consequences on the economy and schoolchildren.

It also follows an investigation by OpenTheBooks.com that showed Fauci’s net worth jumped to $12.6 million between 2019 through 2021 — an increase of $5 million.

In the trailer for the movie, Kennedy said he once regarded U.S. government and health regulatory officials with admiration — but that changed when he witnessed their response to the pandemic.

Kennedy said his book is “a product of my own struggle to understand how the idealistic institutions our country built to safeguard both public health and democracy suddenly turned against our citizens and our values with such violence.”

Kennedy — a lifelong Democrat and founder, chairman and chief legal counsel for Children’s Health Defense — said he has a unique vantage point on the government response to COVID-19 because his family has 80 years of deep engagement with America’s public health bureaucracy and long friendships with key federal regulators — including Fauci, Dr. Francis Collins and Dr. Robert Gallo.

“Members of my family wrote many of the statutes under which these men governed,” Kennedy said. “They nurtured the growth of equitable and effective public health policies and defended that regulatory bulwark against ferocious attacks funded by industry.”

“I built my own alliances with these individuals and their agencies during my years of environmental and public health advocacy. I watched these figures, often with admiration.

“But I also watched how the industry — supposedly being regulated — used its indentured servants on Capitol Hill and its financial clout to systematically hollow out those agencies beginning in the 1980s, disabling their regulatory function, transforming them into sock puppets for the very industry Congress charged them with regulating.”

According to Hays, Kennedy’s book — “a phenomenon” — was “the most suppressed book of my lifetime.”

The book has sold more than 1 million copies and spent 17 weeks on the New York Times bestseller list, despite having received no major media coverage or reviews by leading newspapers.

“I was aware of what Fauci was doing during COVID,” he said, “but I had no idea [of] his history and the damage that he had done and the power base that he had built during the AIDS crisis and how much he hurt people all over the world as he really assembled his powerbase during that period.”

Hays asked Kennedy if he would be open to allowing Hays to create a documentary based on the book, and Kennedy said yes. But then Hays started having second thoughts.

“Half of the people that worked on this film were not willing to have their names on it, for fear of retaliation,” he explained.

After Jeff Hays Films Studio took on the project, Käla Mandrake joined the project to write and direct the film.

Mandrake is an independent filmmaker with 15 years of experience as a producer and writer in film and television, working on award-winning original series including HBO’s “Game of Thrones.”

She told The Defender it was her “privilege and honor” to write the documentary’s script.

“I was asked to write a comprehensive, chronological timeline while remaining diligently faithful to the book,” Mandrake said. “To do so was a massive undertaking and more importantly a labor of love.”

“Because Bobby had done all of the research in the book, it ended up being the fastest documentary film I have ever worked on,” she said.

“In the masterful writing of the book, Bobby not only points to the surrounding characters in this vast medical corruption, but interweaves his own personal experience of awakening — as an environmental lawyer and activist — into the world of vaccines and the criminality behind it.

“So in order to design a compelling visual interpretation of Bobby’s work, I felt it was crucial to put focus on his own battle to understand how the public health policies that his family fostered, and the health statutes which members of his family actually wrote, had systematically been undermined and overtaken by industry.

“Highlighting some of the many profound and shocking truths from the book, I also pulled prominent expert voices for interviews, did a deep dive into their professional backgrounds, and wrote up questions that, in many cases, spanned four decades. The answers are riveting and often disturbing — Bobby’s interview being perhaps the most extensive of them all.

“My research for this film included locating the most powerful archival footage to further substantiate the truths told in this story. The extensive endnotes of each chapter in Bobby’s book were paramount to this task.

“However, I soon found that the censorship of this book was so pervasive that even the links to the source material in the book had been scrubbed from many websites, leaving me to search alternative routes for the footage in some cases. That was one of the challenges that came up in my journey to design this visual counterpart to the book. Another component to the design, was to incorporate the book itself as a sort of character.”

Fauci is ‘a puppet to an even bigger, more perversive system’

“As Fauci has publicly stated that he will step down as director from the NIAID in December, we may feel like the story is over. But the fight is not over after he is no longer in office,” she said.

According to Mandrake, Fauci is a figure in a larger disturbing story that continues to unfold.

“One of the most disturbing takeaways I got from Bobby’s book was that although Fauci is at the center of this 40-year corruption and his influence is enormous and worldwide — he is still a puppet to an even bigger, more perversive system in place,” she said.

Part 2 of the “The Real Anthony Fauci” will be available Oct. 25. For questions about technical issues or how to buy the movie, contact hello AT therealanthonyfaucimovie.com.