Pfizer’s vaccine is already the second-highest revenue-generating drug in the world. Once the pandemic ends, the vaccine maker plans to hike prices. 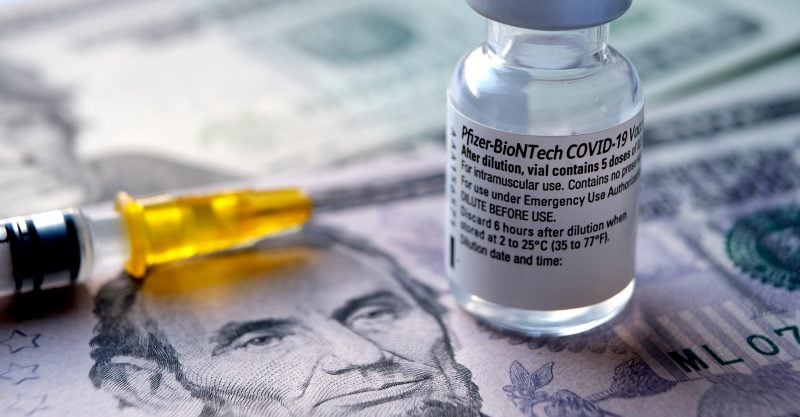 Pfizer’s COVID vaccine is already the second-highest revenue-generating drug in the world — but the company plans to turn the vaccine into an even bigger cash cow once the pandemic ends, according to news reports.

Citing comments made by Pfizer CFO Frank D’Amelio, Forbes and FiercePharma reported that the company “is going to get more on price” once the pandemic wanes and “we are no longer in a pandemic pricing environment,” D’Amelio said.

The vaccine maker expects 2021 sales of about $15 billion based on current contracts for its COVID vaccine, but that number could double as Pfizer says it can potentially deliver 2 billion doses this year, according to The Guardian.

One analyst speculated that Pfizer could be targeting a price 3 to 4 times higher than the $19.50 the company currently charges the U.S. government — or even up to $156 per dose.

Pfizer based the vaccines’ current price on the need for governments to secure doses and get the virus under control. The company splits the profits 50-50 with German partner, BioNTech.

Under Operation Warp Speed, Pfizer agreed to supply the U.S. government with 100 million doses of its vaccine for $1.95 billion, so Americans can receive the vaccine for free.

Pfizer’s initial contract included an option for the government to buy up to 500 million more doses at $19.50 per dose. That’s well below the $150 or $175 per dose the drugmaker typically pulls in for a vaccine, D’Amelio said during the February earnings call.

In comparison, the Moderna vaccine is priced at $15 per dose, Johnson & Johnson (J&J) is $10 and AstraZeneca’s COVID vaccine is $4 per dose, reported Fierce Pharma.

Pfizer executives unveiled the company’s $15 billion sales estimate as part of the company’s 2021 guidance, based on doses set to be delivered in 2021 under existing contracts.

During the Barclays’ Global Health Conference, D’Amelio said the company doesn’t see this as a one-time event, but “as something that’s going to continue for the foreseeable future.”

Pfizer has already launched a study of a third vaccine dose to address variants, called for annual boosters and told investors to expect a revenue stream similar to flu vaccines.

“Every year, you need to go get your flu vaccine,” Bourla said. “It’s going to be the same with COVID. In a year, you will have to go and get your annual shot for COVID to be protected.”

According to Forbes, some critics say the dramatic increase in the cost of the vaccine is a “bait and switch” operation that could result in Pfizer being called to Capitol Hill to justify the expense to the American public.

But the drugmaker isn’t alone in viewing vaccine pricing differently during the pandemic. J&J and AstraZeneca have each pledged to sell their vaccines at cost during the pandemic with the contractual right to deem the pandemic “over” in July 2021, paving the way for price increases, reported the Financial Times.

Moderna indicated it may raise prices after the pandemic turns into an endemic. During a House Committee on Energy and Commerce hearing last summer, manufacturers were asked whether they would sell the vaccine at cost.

Moderna said it would not sell its vaccine at cost, despite the fact that development and manufacturing of the vaccine was almost entirely funded by U.S. tax dollars. Moderna subsequently earned an award for the “worst example of profiteering and dysfunction in healthcare” by the Lown Institute in Boston.

Like Pfizer, rival Moderna is poised to make billions from its COVID vaccine. As of mid-January, Moderna had secured $11.7 billion in advance purchase orders from various governments and organizations, and the company was in the process of negotiating more deals, according to Fierce Pharma.

Moderna CEO Stephane Bancel said in an interview the company could join the ranks of the largest vaccine players by revenue this year.

Unlike Moderna, “Pfizer’s COVID-19 vaccine development and manufacturing costs have been entirely self-funded, with billions of dollars already invested at risk,” the company said in a Nov. 16, 2020 press release.

Dr. Reshma Ramachandran, a physician-fellow in the Yale National Clinicians Scholars Program testified last month before U.S. lawmakers about vaccine pricing and the refusal of the government and drug manufacturers to reveal information about the arrangements they’ve reached around their vaccines.

In an interview with YaleNews, Ramachandran explained that when Pfizer moves away from “pandemic pricing” and towards price points that are in line with other vaccines it has on the market, at $150 or $175 per dose, insurance companies will have to shoulder the cost and they’ll pass it down to the public through insurance premiums.

We’ve already seen this with flu vaccines –– “a publicly funded vaccine technology has continued to increase in price over the past two decades with significant impacts on our public health program budgets and our insurance premiums,” Ramachandran said. “It’s not the companies that have taken on the risk of developing and manufacturing vaccines. It’s the American people.”