A peer-reviewed study in the New England Journal of Medicine shows two doses of an mRNA COVID-19 vaccine yield negative protection against symptomatic SARS-CoV-2 infection, while previous infection without vaccination offers about 50% immunity. 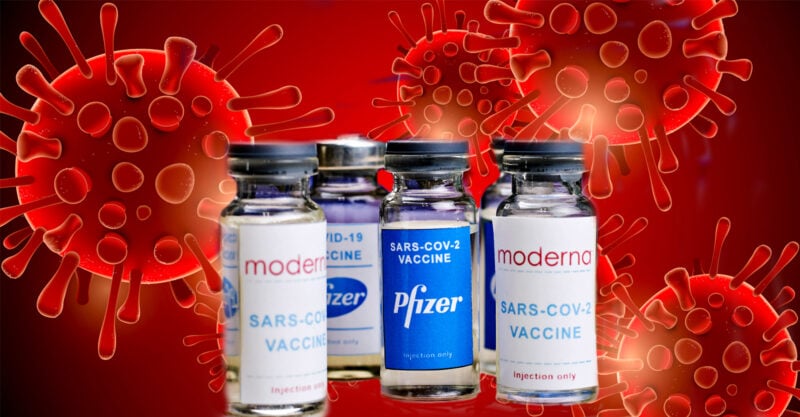 The findings, published June 15 in the New England Journal of Medicine (NEJM) analyzed information from more than 100,000 Omicron-infected and non-infected residents in Qatar from Dec. 23, 2021, through Feb. 21, 2022.

The authors compared the effectiveness of the Pfizer and Moderna COVID-19 vaccines, natural immunity from previous infection with other variants and hybrid immunity (a combination of infection and vaccination) against symptomatic Omicron infection and severe, critical and fatal disease.

Researchers found those who had a prior infection but had not been vaccinated had 46.1% and 50% immunity against the BA.1 and BA.2 Omicron subvariants more than 300 days after the previous infection.

However, individuals who received two doses of the Pfizer and Moderna vaccines, but had not been previously infected, had negative immunity against the BA.1 and BA.2 Omicron subvariants — indicating an increased risk of infection compared to someone without prior infection and vaccination.

Six months after the second dose of Pfizer, immunity against any Omicron infection dropped to -3.4% below an average person without infection and vaccination, which as a control, was set at 0.

For two doses of Moderna, immunity against any Omicron infection dropped to -10.3% about six months after the last dose.

The authors said three doses of the Pfizer shot increased immunity to over 50%, but immunity was measured only at a median of 42 days after the third dose, showing a rapid immune decline in a very short period of time.

In comparison, those who had previously been infected had 50% immunity even at 300 days after infection.

But that statement is ambiguous, said Dr. Madhava Setty, a board-certified anesthesiologist and senior science editor for The Defender, because it could lead readers to wrongly conclude the researchers found that previous infection, vaccination or some combination of vaccination and infection provided equal protection against the BA.1 or BA.2 Omicron variants.

Setty also pointed out the lack of statistical significance in the data surrounding severe, critical or fatal infections:

“Table S5 compares natural immunity to the Moderna formulation. With the BA.1 variant, only natural immunity has positive effectiveness that is statistically significant. You can see that for all the other combinations of vaccine doses, the window of statistical significance extends into the negative range.

“For example, in the “Three Doses with no prior infection” row the effectiveness where we can be 95% certain ranges from -435% to 100%. This is meaningless. They cannot claim that three doses is predictive of benefit. In fact, it could very well be deleterious. We just don’t know because so few people had severe illness in that cohort.

“The equivalent table is not given for Pfizer, however Figure 2 in the main text shows there is a statistically significant benefit against severe illness.”

With regard to the BA.2 variant, natural immunity may also fall in the negative range (-6.8 to 92.4), as does three doses with no prior infection (-3800 to 100), Setty said. “Only when they group the two variants together can they calculate effectiveness that is statistically significant.”

Setty said researchers also excluded a large number of cases from their calculation and failed to disclose how many people got severe, critical or fatal COVID-19.

“All of these cases were excluded from their calculation. Nowhere do they tell us how many of those got severe, critical or fatal COVID-19.”

Setty also noted researchers glossed over the time frames where they compare effectiveness. He said:

“In Figure 3, researchers only calculated effectiveness of natural immunity by adding up cases after four months. This is probably because researchers define previous infection occurring greater than 90 days earlier.

“However, even 120 days out, a previous infection still offers greater protection than two or three doses at their maximum window of protection. Even a year out, natural immunity is still on par with a recently boosted individual.” 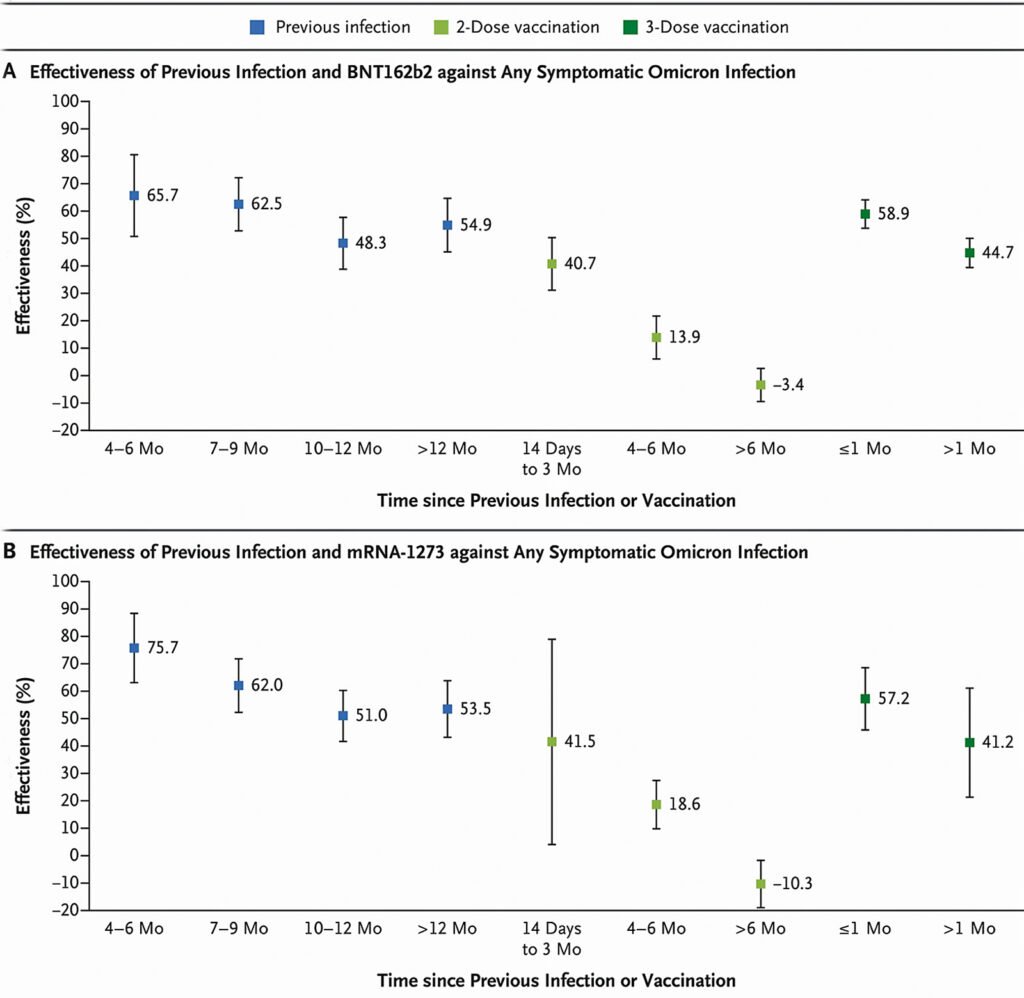 The June 15 NEJM study followed another NEJM study, published June 9, that found natural immunity “protection was higher than that conferred after the same time had elapsed since receipt of a second dose of vaccine among previously uninfected persons.”

Using the Israeli Ministry of Health database, researchers extracted data for August and September 2021, when the Delta variant was predominant, on all persons who had been previously infected with SARS-CoV-2 or who had received Pfizer’s COVID-19 vaccine.

The study found both natural and artificial immunity waned over time, but individuals who were previously infected but were not vaccinated had half the risks of reinfection compared to those who received two doses of Pfizer and who had never been infected.

“Among persons who had been previously infected with SARS-CoV-2, protection against reinfection decreased as the time increased,” researchers said, “however, this protection was higher” than protection conferred during the same time interval through two vaccine doses.

Natural Immunity wins again. New England Journal Study: Natural immunity “protection was higher than that conferred after the same time had elapsed since receipt of a second dose of vaccine among previously uninfected persons.” https://t.co/aEFHKfXQUi

Researchers acknowledged natural infection with the SARS-CoV-2 virus that causes COVID-19 “provides natural immunity against reinfection,” adding that recent studies have shown “waning of the immunity provided by” Pfizer’s vaccine.