Pfizer COVID Vaccine Reduces Sperm Quality — But for How Long?

The authors of a study showing Pfizer’s COVID-19 vaccine reduces sperm quality concluded the reduction was temporary, but others who examined the data behind the study questioned that assertion. 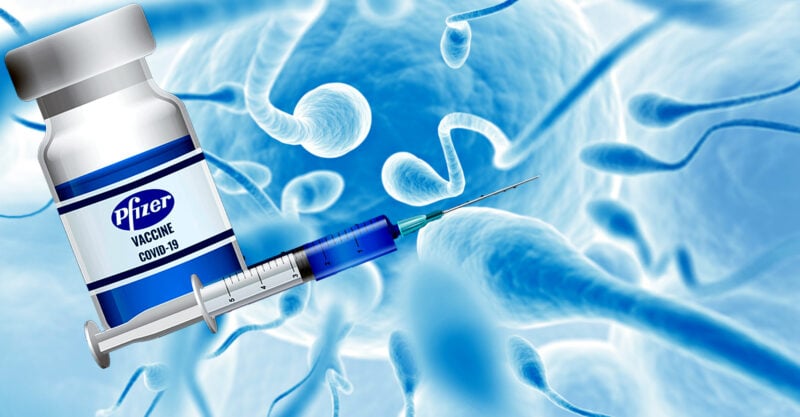 Pfizer’s COVID-19 vaccine reduces sperm quality — including sperm concentration and total motility count (the total number of moving sperm in a sample) — according to a peer-reviewed study published June 17 in the journal Andrology.

The authors of the study concluded the negative effect of the Pfizer vaccine on sperm quality was temporary. However, some people who examined the data behind the study questioned that conclusion.

The authors of the Andrology study set out to investigate whether vaccination with Pfizer’s mRNA shot affects sperm quality partly because studies have reported that SARS-CoV-2 interacts with angiotensin-converting enzyme 2 (ACE2) receptors to enter host cells — and testicular cells (Sertoli, Leydig, spermatozoa, and spermatogonia) have ACE2 receptors.

Pfizer’s preclinical data from animal studies also showed small amounts of the Pfizer mRNA vaccine end up in the ovaries and testes after injection.

The study participants had received two doses of the Pfizer-BioNTech (BNT162b2) vaccine, were negative for SARS-CoV-2 based on PCR or serological tests and did not have any symptoms of SARS-CoV-2 infection.

The authors found no significant change in the above parameters between T1 and T0 (baseline).

“Although concentration and TMC [total motile count] were reduced also on T3, these values did not reach statistical significance (table 2).”

Not everyone who examined the data agreed with study’s conclusions

The researchers wrote that the impact of Pfizer’s mRNA shot on sperm concentration and total motile count was temporary and that it was statistically significant only at T2, 75 to 150 days after vaccination, at which point the sperm quality recovered.

But others who examined the data questioned the authors’ assertions.

Writing on Substack, journalist Alex Berenson argued “a five-month decrease hardly qualifies as temporary for someone trying to start a family.”

More troubling, Berenson and other writers said, the paper’s data may not support the researcher’s assertion that sperm concentration and total motile count returned to normal after five months.

“In fact,” wrote Berenson, “by some measures, levels continued to decline.”

The key table from the study is Table 2, below. 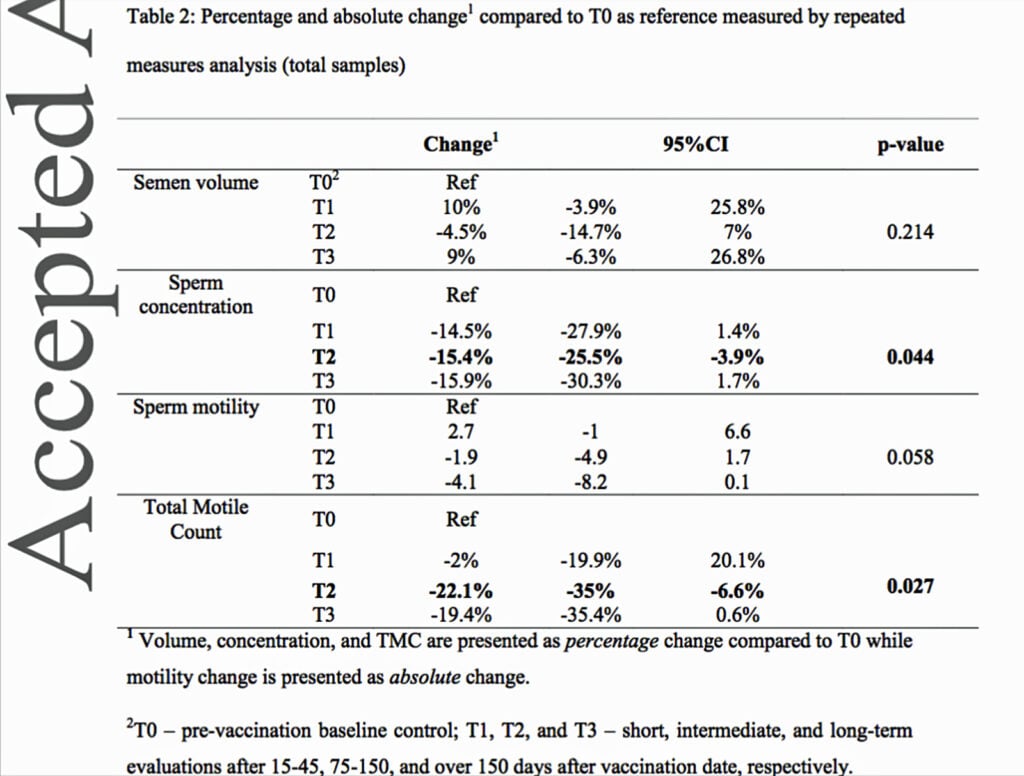 The p-values are not given, and the authors write, “Although concentration and TMC [total mobile count] were reduced also on T3, these values did not reach statistical significance.”

However, these numbers hardly show the ”recovery” to normal sperm parameters that the researchers claim. This may warrant requesting the original data, and the p-values for the T3 entries.

In addition, T3 was the last sampling time, at least 150 days (5 months) post vaccination, with the average sample taken 175 days after vaccination, plus or minus 27 days.

So the longest time between vaccination and sampling was 202 days, just under 7 months. What happens more than 7 months later?

The change in sperm motility was presented as an absolute change from T0, and was down at T2, but just above the authors’ cutoff for significance. It is even further down at T3, but presumably this also did not reach statistical significance, since no p-value is reported.

Rather than acknowledging this, Berenson wrote, “The authors offered the best possible spin on their data, while at the same time publishing the figures themselves near the end of the paper so that other researchers could see the reality for themselves.”

Ran Israeli on Twitter, and Berenson and bad cattitude on Substack, pointed out the researchers focused on the median instead of the average.

Seems like the authors took advantage of the Median vs Average differences to suggest that everything was fine 150 days after vaccination.

Is it really so?
Median disadvantages:
“Median is not affected by very large/very small values.”
We need more data!https://t.co/heIBOkO00F pic.twitter.com/5rjPmjFuUC

“In this case, the fact that the average fell much more than the median is a sign that some of the men probably had near-zero sperm counts in both the second and third time periods — and that fact is arguably more important than the median change.”

“The two are interchangeable in a homogeneous population.”

But if one person’s sperm count drops to zero — an important outlier — then the average is 9, but the median stays the same: 10.

If another person’s total motility count drops to zero, the average is now 8 (a 20% drop), but the median is still 10. We can see how the median can give a different picture than the average.

Berenson and bad cattitude both pointed out that it seems common these days for researchers with findings that could raise concerns about the mRNA shots to tone down their findings in order to get published.

Berenson said this tactic ”is likely a response to the overwhelming political pressure to hide the deepening crisis around the safety and efficacy of shots that governments have given to over a billion people worldwide.”

These authors of the study in Andrology went a step further, writing about the “dramatic phenomenon of fake news” spreading in societies and countries.

They concluded: “Since misinformation about health-related subjects represents a public health threat, our findings should support vaccination programs.”