Scientists Studied 12 Masks — Every One Contained This Cancer-Causing Compound

In a study of 12 face masks, every mask contained titanium dioxide (TiO2) particles in at least one layer, at levels that “exceeded the acceptable exposure level.” 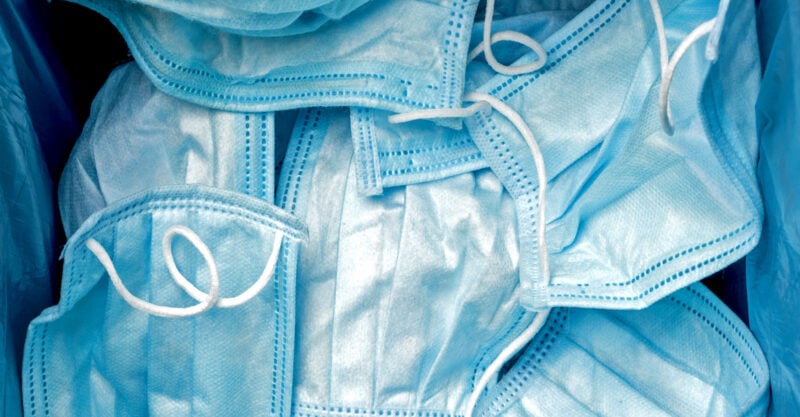 The face masks that were supposed to protect your health may turn out to be detrimental to it, as increasing evidence points to toxins within their fibers. Titanium dioxide is one such toxin, one that’s particularly troubling in face masks because it’s a suspected human carcinogen when inhaled.

Not only have adults been unwittingly exposed to this likely cancer-causing substance due to widespread mask mandates put in place during the pandemic, but so too have children, whose bodies are especially vulnerable to toxic influences.

Coupled with evidence suggesting that mask mandates and use did not lower the spread of COVID-19, forced mask mandates become all the more atrocious.

Group 2B carcinogen detected in masks

The International Agency for Research on Cancer classifies titanium dioxide as a Group 2B carcinogen, which means it’s “possibly carcinogenic to humans” by inhalation. Prior to the pandemic, this occurred primarily in occupational settings during the production of titanium dioxide powders or in the manufacture of products containing the substance.

There’s also been some concern about spray-on (aerosolized) sunscreens, hair color sprays and cosmetic powders containing microscopic particles of titanium dioxide that could be inhaled.

Despite the fact that titanium dioxide’s carcinogenicity when inhaled is well-known, the compound is commonly used in face mask textiles to improve stability to ultraviolet light and for use as a white colorant and matting agent.

Nanoparticle technology is also being used in face masks, and nanofibers containing titanium dioxide have been used to make antimicrobial filters, often in combination with silver and graphene, while titanium dioxide nanoparticle coatings may also be applied to cotton fabric to enhance antibacterial properties.

Not only have adverse effects been reported in animal studies involving inhalation of titanium dioxide particles, but a team of researchers warned of “possible future consequences caused by a poorly regulated use of nanotechnology in textiles,” expanding on potential human health and environmental effects.

“Although originally classified as biologically inert, there is a growing body of evidence on the toxicity of TiO2 [titanium dioxide] to humans and non-target organisms … Artificial sweat was also used to test the concentration of the silver and TiO2 released from fabrics. The release rate was found to depend on the concentration of nanomaterials in the fabric and the pH of sweat.”

A meta-analysis published in the journal Small, which focuses on science at the nano- and microscale, also called for a rethinking of nano-TiO2 safety, citing numerous toxic effects in humans and aquatic animals:

“Genotoxicity, damage to membranes, inflammation and oxidative stress emerge as the main mechanisms of nano-TiO2 toxicity. Furthermore, nano-TiO2 can bind with free radicals and signal molecules, and interfere with the biochemical reactions on plasmalemma [cell membrane].

“At the higher organizational level, nano-TiO2 toxicity is manifested as the negative effects on fitness-related organismal traits including feeding, reproduction and immunity in aquatic organisms.”

In a study published in Scientific Reports, researchers tested the amount of titanium — used as a proxy for TiO2 particles — in 12 face masks meant to be worn by the public, including single-use disposable varieties as well as reusable masks. The masks were made of various materials, including synthetic fibers like polyester and natural fibers, such as cotton.

Every mask contained titanium dioxide particles in at least one layer, although they weren’t found in cotton fibers or meltblown nonwoven fabrics.

Generally, the amount of titanium dioxide particles in nonwoven fabrics was lower — by a factor of 10 — than in polyester and polyamide fibers. Further, all of the masks except one contained TiO2 nanoparticles, which present an elevated inhalation hazard.

Nanosized particles are typically described as being less than 100 nanometers (nm). The median size of the titanium dioxide particles in the masks ranged from 89 to 184 nm.

Based on a model in which face masks are “worn intensively,” the study found that exposure to titanium dioxide “systematically exceeded the acceptable exposure level to TiO2 by inhalation (3.6 µg).”

On Twitter, Federico Andres Lois shared, “The best (lowest contamination) has more than 5 times the acceptable limit. Ohh and by the way, you are forcing your kid to breathing through it.”

This, the researchers concluded, calls for in-depth research to avoid adverse effects:

“[T]hese results urge for in depth research of (nano)technology applications in textiles to avoid possible future consequences caused by a poorly regulated use and to implement regulatory standards phasing out or limiting the amount of TiO2 particles, following the safe-by-design principle.”

How masks make you sick

The potential consequences of breathing in carcinogenic particles from face masks worn during the COVID-19 pandemic won’t be known for years, but red flags have been raised from the beginning that face mask usage has consequences, with no meaningful benefit.

Dr. Zacharias Fögen conducted a study to find out whether mandatory mask use influenced the COVID-19 case fatality rate in Kansas from Aug. 1 to Oct. 15, 2020. He chose the state of Kansas because, while it issued a mask mandate, counties were allowed to either opt in or out of it.

“These findings suggest that mask use might pose a yet unknown threat to the user instead of protecting them, making mask mandates a debatable epidemiologic intervention,” he concluded.

That threat, he explained, may be something called the “Foegen effect” — the idea that deep reinhalation of droplets and virions caught on facemasks might make COVID-19 infection more likely or more severe.

Fögen explained that wearing masks could end up increasing your overall viral load because instead of exhaling virions from your respiratory tract and ridding your body of them, those virions are caught in the mask and returned. This might also have the effect of increasing the number of virions that pass through the mask, such that it becomes more than the number that would have been shed without a mask.

“In the ‘Foegen effect,’ the virions spread (because of their smaller size) deeper into the respiratory tract. They bypass the bronchi and are inhaled deep into the alveoli, where they can cause pneumonia instead of bronchitis, which would be typical of a virus infection.

A 2021 report focused on health, safety and well-being of face mask usage further noted potential permanent physical damage to the lungs caused by fibrosis from inhalation of fibrous nanoparticles.

“There are real and significant dangers of respiratory infection, oral health deterioration and of lung injury, such as pneumothorax, owing to moisture build-up and also exposure to potentially harmful levels of an asphyxiant gas (carbon dioxide [CO2]) which can cause serious injury to health,” the authors explained.

The physical repercussions are only one aspect to consider, as the psychological consequences of mask mandates are also severe. The journal Pediatrics recently highlighted the burden felt by parents, clinicians and patients in pediatric cancer wards when they were forced to wear masks.

Hidden by face masks, clinicians felt powerless to display empathy and compassion during the most difficult conversations with their patients and their families.

Wrote one clinician, who had to deliver devastating health news about the child of a friend:

“My mask covered my expression. Perhaps the only way she could have known just how devastated I was to learn of this news was by the tears welling up in my eyes. My natural response was to wrap my arms around my friend and tell her everything would be okay. ‘I will help you, I will fix her, I will do everything in my power to make this go away.’

“But how do I show you when my words are muffled by the mask? How can I softly share my words of condolence when I am struggling to catch enough air myself through the 3 layers of fabric? How does anyone break this kind of awful news with personal protective gear creating a barrier between doctor and patient?”

The children were also affected, as they couldn’t see their parents’ faces during a time when they needed them most.

“When a policy change mandated that parents be masked 24/7 while in the hospital, my child was furious. She would rip the mask off my face and, if it was a paper mask, would pull off the strings so it could not be worn again. ‘I need to see my mommy’ she told me, along with ‘I need kisses to make me feel better and you can’t kiss me with a mask.’”

A 2021 psychology report also stated that masks are likely to be causing psychological harm to children and interfering with development.

“The extent of psychological harm to young people is unknown,” the report stated, “due to the unique nature of the ‘social experiment’ currently underway in schools, and in wider society.”

You may recall that countless public figures have been de-platformed by multiple social media and other online outlets for speaking out against the narrative, including the misguided notion that masks were useful for reducing COVID-19 cases.

Indeed, it wasn’t long ago that even physicians who spoke out against mandatory masks were hunted down like a modern-day witch hunt.

Now, it seems, YouTube has changed its tune, as it has updated its policies about what constitutes “misinformation.” Stating that “masks do not play a role in preventing the contraction or transmission of COVID-19,” or that “wearing a mask is dangerous or causes negative physical health effects,” was previously a violation of their policy, but this verbiage has since been removed from its examples of misinformation.

Other mask-related statements that have been removed from YouTube’s definition of misinformation include:

Curiously, while YouTube no longer classifies “claims that COVID-19 vaccines are not effective in preventing the spread of COVID-19 as misinformation,” “claims about COVID-19 vaccinations that contradict expert consensus from local health authorities or WHO” are still off limits.

It’s also against YouTube’s guidelines to post “content alleging that vaccines cause chronic side effects” or “content claiming that vaccines do not reduce transmission or contraction of disease,” — the latter being a blatant contradiction to their COVID-19 vaccine terms.

So, while YouTube now allows you to say masks don’t work, you still can’t contradict WHO on vaccines. Little by little, however, the truth will emerge, as is already occurring with face masks and their carcinogenic contents.