Authors of Great Barrington Declaration Got It Right — Lockdowns Were a Disaster, Especially for Young People

In a segment of The Hill’s “Rising,” Kim Iversen discussed the controversial Great Barrington Declaration, suggesting the authors’ predictions were spot on — lockdowns proved to be a disaster with devastating consequences for younger people who often are at little to no risk of severe COVID. 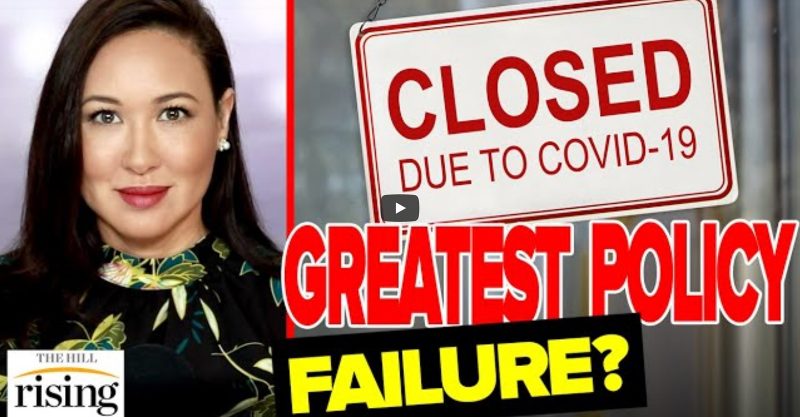 In a segment of The Hill’s “Rising,” Kim Iversen discussed the controversial Great Barrington Declaration, suggesting the authors were correct about the effects of harsh pandemic lockdown policies.

“Back in October 2020, three well-respected epidemiologists and public health scientists —  Sunetra Gupta of Oxford, Jay Bhattacharya of Stanford and Martin Kulldoroff of Harvard — wrote a memo detailing what they believed would be a better approach to handling the pandemic,” said Iversen.

“During that time everyone was still all about the lockdowns. The common wisdom of the day was stay home, save lives and wait for a vaccine. Schools closed, businesses were shuttered and people were scrambling to figure out how they were going to make ends meet.”

Iversen noted how those who came out against lockdown policies “were labeled selfish grandma killers, or were told they were in the pockets of Wall Street, only caring about profits.”

But the authors of the Great Barrington Declaration said the consequences of these lockdowns “are going to be disastrous,” she said.

Iversen read a part of the declaration where the authors hypothesized the probable blowback from lockdown policies:

“The results (to name a few) include lower childhood vaccination rates, worsening cardiovascular disease outcomes, fewer cancer screenings and deteriorating mental health — leading to greater excess mortality in years to come, with the working class and younger members of society carrying the heaviest burden. Keeping students out of school is a grave injustice.”

“So let’s fast forward because it’s now been a year,” said Iversen. “Were they wrong? Did lockdowns save lives without devastating consequences? Or were these three authors unfortunately right?”

Iversen said the declaration’s authors predicted children will not have access to the regular childhood vaccination schedule, “so let’s start there.”

Iversen referenced documents from a recent Maryland State Board of Education meeting showing in the state of Maryland alone, 23,000 children in public schools did not get their regularly scheduled vaccines this year, compared to only 62 children the year before.

She continued, “So let’s look at this NPR article published on Tuesday that explains how ERs are now swamped with seriously ill patients, but many don’t even have COVID.”

“Even in parts of the country where COVID-19 isn’t overwhelming the health system, patients are showing up to the ER sicker than they were before the pandemic, their diseases more advanced and in need of more complicated care … Months of treatment delays have exacerbated chronic conditions and worsened symptoms. Doctors and nurses say the severity of illness ranges widely and includes abdominal pain, respiratory problems, blood clots, heart conditions and suicide attempts, among others.”

The declaration’s prediction of a post-lockdown world with deteriorating mental health was especially right, Iversen argued.

“There’s also been more than a 50% increase in ER visits for suspected suicide attempts among girls ages 12-17,” Iversen said.

“So it turns out a year later, after these three prestigious and well-respected public health scientists have been villainized, they were right … The lockdowns proved to be a disaster with devastating consequences for younger people who often are at little to no risk of severe COVID,” she explained.

“And for the people who say that the lockdowns slowed the spread and stopped hospitals from becoming overwhelmed, a paper by Simon Fraser University examining 80 studies on lockdowns from around the world concluded that only 20 of the 80 studies showed a positive benefit in slowing the spread, and even then it was minor,” Iversen said.

Author of that paper, economics professor Douglas Allen, concluded that lockdown policies were possibly “one of the greatest peacetime policy failures.”