In an exclusive interview with The Defender, Hayley Lopez, who developed postural orthostatic tachycardia syndrome at age 29 after her first dose of the Pfizer COVID-19 vaccine, can no longer work at the job she loves because she can’t pass the required medical tests. 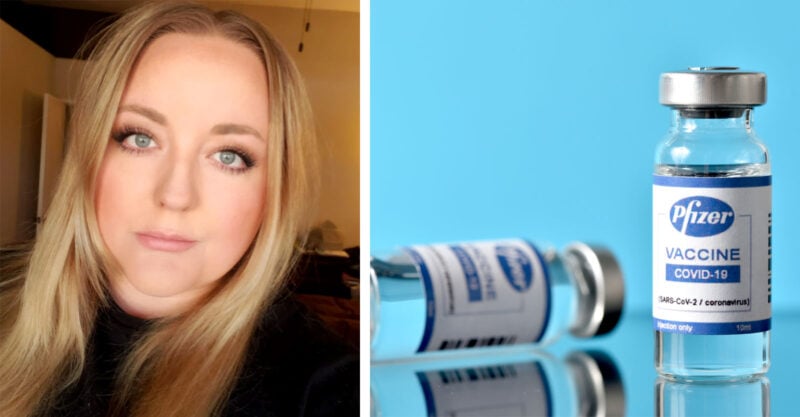 At 29, Hayley Lopez had a promising career she had worked 12 years to achieve, as an air traffic controller at one of the U.S. Federal Aviation Administration’s (FAA) busiest facilities in the U.S.

On Oct. 8, 2021, that career came crashing to a halt 15 minutes after Lopez got her first, and only, dose of the Pfizer-BioNTech COVID-19 vaccine.

In an exclusive interview with The Defender, Lopez, now 30, shared her story, including the injuries she sustained and the challenges she experienced trying to get a diagnosis and treatment.

“About 15 minutes after the shot, I noticed arm and chest pain,” Lopez said. “Then, I noticed dizziness, shortness of breath, memory issues and stuttering within three days — and that’s when I knew something was really wrong.”

Lopez sought help at an urgent care facility, and while there, she said, drifted in and out of consciousness.

“I still suffer from all symptoms now, eight months later.”

Lopez didn’t want the vaccine, but under the Biden administration’s executive order, federal workers were required to get the vaccine or be fired.

“I want people to know that I was just a normal, healthy 29-year-old trying to navigate life,” Lopez said.

“I worked very hard to get to where I am in my career and at the time, I felt as though my world would end if I lost my job. I got the shot to keep my job and now it may end my career.”

For Lopez, the symptoms she experienced almost immediately after receiving the Pfizer shot were just part of her troubles. She also had difficulty locating a doctor who could diagnose her condition and who wouldn’t dismiss her concerns that the symptoms were vaccine-related.

“I could honestly go on and on about the healthcare system and how terrible you’re treated when you are vaccine-injured,” Lopez said. “I went to a total of 32 appointments with 17 different doctors in seven months.”

The first two doctors she saw in urgent care told her it was a coincidence that the symptoms developed immediately after the vaccine.

“They seemed more concerned with assuring me it wasn’t from the vaccine than treating me,” she said.

Some of the “diagnoses” she received were dismissive — just “stress-related,” doctors told her — while others bordered on sexist.

“My tests kept coming back normal so my doctor assumed it was ‘just anxiety,’” Lopez said. “I was even told by specialists that it was because of ‘my cycle’ and that ‘a lot of women have the same complaints.’”

According to Lopez, she received a series of misdiagnoses, including costochondritis, multisystem inflammatory syndrome, long COVID, anxiety and depression.

“I left every doctor’s appointment with tears in my eyes because I knew they were wrong,” Lopez said. “I knew something was wrong with me and I knew it wasn’t just in my head.”

Lopez got a diagnosis after she happened to read about postural orthostatic tachycardia syndrome (POTS), a condition that affects blood flow and can result in symptoms such as lightheadedness, fainting and increased heartbeat, symptoms which appear when standing up from a reclined position.

“The first time I read about POTS, I cried because it was like reading about myself,” Lopez said. “I discovered POTS on my own. I did not get any information or guidance from a doctor.”

When she finally went to a doctor who specializes in POTS, “He knew right away that I had POTS and understood my struggles with previous doctors, because all his POTS patients go through the same things,” Lopez said.

POTS has prevented Lopez from working, she said:

“I am still employed by the FAA, but I am unable to work. I have to maintain a medical clearance, same as airline pilots, to do my job.

“My medical clearance has been taken away and I don’t know if I’ll ever get it back.

“I got the shot to keep the job that I love and now that same shot is keeping me from medically being able to do my job.”

Lopez received some financial support from the federal worker’s compensation program — 45 days of continuation of pay — as the injuries she sustained were deemed a workplace injury. However, she is still awaiting approval for further compensation beyond the initial 45 days.

Lopez reported her injuries to the Vaccine Adverse Event Reporting System (VAERS). She heard back from VAERS “about six months after I reported it, and they requested current information about my vaccine injury.”

However, as of this writing, one of the misdiagnoses she received continues to appear on her VAERS file.

“My condition hasn’t been updated in VAERS since I sent in additional information at their request almost two months ago.” The report still lists her misdiagnosis, she said.

The latest available data from VAERS show 429 reports of POTS with 310 cases attributed to Pfizer, 99 reports attributed to Moderna and 20 reports to Johnson & Johnson. The reports were submitted between Dec. 14, 2020, and June 3, 2022.

Lopez said her injuries continue to impact “every aspect” of her life.

“On a bad day, I have trouble walking from the couch to my kitchen to get a glass of water,” she said. “On a good day, I can’t walk for more than two minutes, so I can’t go to the store or take my dog for a walk. I’m lucky if I’m able to cook dinner.”

She even has trouble speaking. “I often stop mid-sentence because I forgot what I was talking about or [have] forgotten a simple word.”

Because she has fainting spells, she can shower only when her husband is home, she said.

“I wear a wrist monitor for my heart rate and [have] fall detection to alert my husband if I faint.”

In addition to working as an air traffic controller, Lopez was a private pilot and enjoyed flying. She has not been able to engage in that activity either following her vaccination.

“I have not been able to fly — the medical clearances for air traffic controllers and pilots are the same certificate,” she said.

Her vaccine injuries also affected relationships with people who were previously close to her.

“I have lost people close to me because they either don’t want to hear or believe that the vaccine can cause harm, or they just don’t care,” she said.

While Lopez said she is unaware of any other air traffic controllers who have had a similar experience to hers, she is aware of “a few pilots” injured by the vaccines.

“I’m sure there are many people within the aviation industry afraid to come forward with vaccine injuries, as they will lose their medical clearances and in turn, lose their jobs.”

For Lopez, her experience illuminates the importance of raising awareness of vaccine injuries, and of conditions such as POTS.

“Awareness for POTS needs to be spread throughout the medical community,” she said. “The only thing that’s rare about vaccine injury is that it’s rarely talked about. POTS has no cure and can be lifelong.”