In an interview with The Defender, Marie Follmer said no one warned her that her 19-year-old son — a healthy, elite athlete who had recovered from COVID — shouldn’t get the Pfizer vaccine because it would put him at greater risk of developing myocarditis. 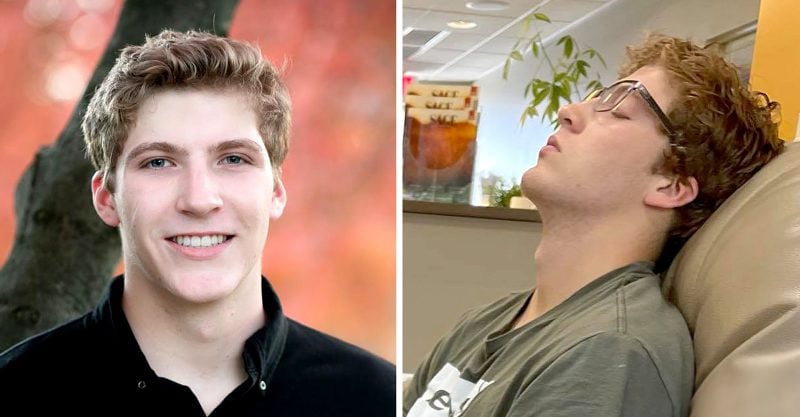 Greyson Follmer, an Ohio State University (OSU) student, was an elite athlete and member of the university’s chapter of the Reserve Officers’ Training Corps (ROTC).

But, according to his mother, the 19-year-old from Ohio is looking at a very different future now, after he developed severe heart complications following his second dose of Pfizer’s COVID vaccine.

In an exclusive interview with The Defender, Marie Follmer said nobody warned her about the potential for increased risks of COVID vaccine-related adverse events for people like her son, who already had COVID and had acquired natural immunity.

Greyson has played sports since he was 4 years old. He was an athlete who played in the state soccer championship in high school and then went on to OSU and started college during the COVID pandemic. He also joined ROTC his freshman year and was very active — running several miles every day with heavy packs on his back.

Greyson was perfectly healthy and had no underlying conditions except for asthma — which didn’t affect his athletic abilities — and food allergies.

Like most students early on in the year, Greyson and his friends got COVID. Though most had no symptoms, Greyson experienced mild flu symptoms — though they were nothing like his post-vaccine symptoms, Follmer explained.

The university required students who had COVID to quarantine. It also required them to get a heart MRI before they could return to school. Follmer thought that was strange, but she made sure her son got one.

When the cardiac MRI came back it showed Greyson’s heart was enlarged with slight inflammation. The cardiologist thought it could be related to being an elite athlete, and signed a release for Greyson to return to school.

“He wasn’t 100%, but he was recovering. He was able to go skiing, return to ROTC and went on spring break,” Follmer said.

Follmer and her husband got vaccinated first with Moderna. When a friend of Follmer secured appointments for the kids to be vaccinated, she drove to OSU, picked up Greyson and told him he was going to get vaccinated.

Greyson received his first dose of Pfizer on April 16, and a second dose on May 7. After the first dose Greyson experienced minor symptoms, but his mother didn’t connect them to the COVID vaccine.

“My son feels like he’s having a heart attack 24/7,” Follmer said. “He now has high blood pressure, severe chest pains, back pain, elevated kidney levels, hypothyroidism, inflamed lymph nodes in different areas of his body, and he can’t work or exercise.”

Follmer said Greyson feels like he’s dying and has to sleep all the time. He likely won’t be able to go back to ROTC and doesn’t know if he will be able to return to school in August. Greyson experienced broken feet from soccer and said nothing compares to the chest pain he feels now.

“A perfectly healthy kid has gone downhill,” his mom said.

Doctors initially attributed the heart problems Greyson experienced in May, after the vaccine, to the COVID he had in September 2020. Believing he was a “long-hauler,” they referred her son to the Ohio COVID Clinic.

According to the Harvard Gazette, “COVID long-haulers” is a term used to describe those who continue to feel symptoms of COVID long after the expected recovery time. Patients tend to be younger, and in some cases, initially experienced only mild symptoms.

On June 15, Greyson was taken by emergency medicine services to Ohio Health. Follmer said she knew her son’s symptoms were connected to the Pfizer vaccine, but nobody knew how to help him.

Greyson has seen numerous doctors and specialists. His family has spent more than $12,000 in one month. Lab work is covered by insurance but his other treatments are not. Greyson is doing stem cell treatments, taking Ivermectin and numerous supplements to support his condition.

Doctors project it will take him two years to fully recover, though there’s no research or information on how to treat myocarditis brought on by a COVID vaccine.

In the meantime, Greyson can’t mow the grass, work or go to school. He walks around holding his chest and is in counseling to cope with the effects this has had on his life, his mother said.

Follmer said she’s not an anti-vaccine person, especially because she has a young daughter who could get sick. None of her children had ever had reactions to vaccines.

Follmer’s 11-year-old daughter is immunocompromised. Even though all of her children had been exposed to COVID, she thought she was protecting her daughter by having her son vaccinated.

“I think what’s frustrating to me right now is that nobody told me that if you have an enlarged heart or heart inflammation, don’t get the shot. Not one person ever told us this. I never would have thought in a million years my kid would get sick.

“I was ready to give my daughter the vaccine — she is going to be 12 in August and has one lung and a reconstructive airway. There is no way on this planet I would give her the vaccine now. Greyson’s twin brother will also not be getting the vaccine after seeing what his brother has gone through.”

Follmer said no one told her about reporting her son’s adverse reaction to the Centers for Disease Control and Prevention’s (CDC) Vaccine Adverse Events Reporting System (VAERS). “If I hadn’t put it on Facebook and someone hadn’t told me to put it in VAERS, I would have never known to do it.”

Follmer said she has since reported her son’s adverse reaction to VAERS (ID1395886), but no one has followed up on her son’s case nor has the report been added to the system. She also tried calling the CDC to see if someone there could help them.

“I just want him better. That’s the bottom line,” Follmer said. I just want everyone to know — don’t be naive like I was and think that this can’t happen to your kids.”

Dr. Hooman Noorchashm, a surgeon, immunologist and patient safety advocate, wrote several letters to the U.S. Food and Drug Administration (FDA) shortly after the agency granted Pfizer and Moderna Emergency Use Authorization for their COVID vaccines.

In his letters, Noorchashm urged the FDA to require pre-screening for SARS-CoV-2 viral proteins in order to reduce COVID vaccine injuries and deaths.

Noorchashm also called on Pfizer and Modern to institute “clear recommendations to clinicians that they delay immunization in anyone recently recovering from COVID, as well as any known symptomatic or asymptomatic carriers — and to actively screen as many patients with high cardiovascular risk as is reasonably possible, in order to detect the presence of SARS-CoV-2, prior to vaccinating them.”

According to Noorchashm, it is scientifically established that once a person is naturally infected by a virus, antigens from that virus persist in the body for a long time after viral replication has stopped and clinical signs of infection have resolved.

When a vaccine reactivates an immune response in a recently infected person, the tissues harboring the persisting viral antigen are targeted, inflamed and damaged by the immune response.

“In the case of SARS-CoV-2, we know the virus naturally infects the heart, the inner lining of blood vessels, the lungs and the brain,” explained Noorchashm. “So these are likely to be some of the critical organs that will contain persistent viral antigens in the recently infected. Following reactivation of the immune system by a vaccine, these tissues can be expected to be targeted and damaged.”

In an interview with The Defender, Noorchashm said Greyson’s case reminded him of Everest Romney — the all-American basketball player who was hospitalized after his second dose of Pfizer for blood clots in his brain.

Here’s my latest podcast. This one with Cherie Romney who says both her husband + 17-year-old son suffered serious blood clots and were hospitalized after receiving COVID mRNA vaccines. #TheDefender https://t.co/jbPCGjtSRb

According to Noorchasm, both Romney and Greyson had acquired natural immunity because they’d been infected with COVID, and they likely did not stand to gain any benefit from a COVID vaccine.

“It’s a colossal error to vaccinate people who have had prior infections, and this is totally avoidable harm we are causing. Why are we rushing to vaccinate people who we know are immune and don’t stand to gain any benefit? If I do anything medically unnecessary to someone as a doctor, I’m opening them up to potential harm. If you’ve had a recent infection and you have viral antigens in your tissues, you can literally and immunologically cause tissue damage.”

Medical necessity is on the ground floor of everything doctors do in regards to safety, Noorchasm said. “If you want to be a safe hospital, doctor, practitioner or health agency you would not do anything that’s not necessary to people or fundamentally not beneficial. There’s only a probability of harm if there’s no medical necessity,” he said.

When asked specifically about myocarditis, Noorchashm said this is the original prediction and prognostication he made to the FDA.

“We know that natural SARS CoV-2 virus can affect the heart. It can cause blood clots that can lead to heart attacks and strokes and myocarditis. The virus can trigger an immune response or inflammation to the heart. Anywhere the virus goes the immune system will target that tissue and cause problems. If you’ve had a prior infection and you have antigens in the tissues where the virus goes, like the heart, and you activate the immune response [with a vaccine], you’re going to activate damage.”

Noorchashm, who is pro-vaccine, said shots need to be spread out for people who are not immune and want to be vaccinated, and the FDA and CDC should think carefully about limiting the shot to one dose, especially in young people, or increasing the duration between first and second doses.

In his letter to the FDA, Noorchashm recommended actively screening as many patients with high cardiovascular risk as is reasonably possible, in order to detect the presence of SARS-CoV-2, prior to vaccinating them.

“If someone has a known history of COVID, there should not be any rush to get them vaccinated,” Noorchashm said. “That should be our national policy. If you’ve either had COVID, or you have laboratory evidence of immunity, you shouldn’t rush into getting vaccinated.”