Governments Crack Down on Journalists in Attempt to Control Pandemic Narrative

Worldwide, at least 14 journalists have been arrested for “unfair and imprecise coverage” of the pandemic. In all, 387 journalists were detained in 2020, largely for political reporting. 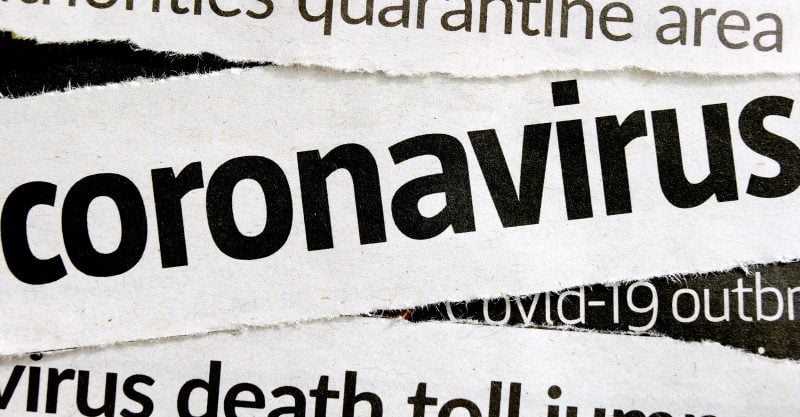 Journalism has long been a risky profession, but the COVID-19 pandemic has provided many governments with an excuse to increase their crackdown on journalists who counter government narratives about the virus and their handling of the pandemic.

Globally, at least 14 journalists have been arrested for “unfair and imprecise coverage” of the pandemic. Courtney Radsch, advocacy director for the Committee to Protect Journalists, told U.S. News that “COVID is a very convenient excuse to target journalists that regimes did not like before.”

According to two media rights groups — the CPJ and Reporters Without Borders — China tops the list of countries where suppression of journalism is taking place. Worldwide, 387 journalists were detained during 2020, just two fewer than were detained in 2019. Of those, 54 are being held hostage and four are missing in action. More than half — 61% — are held in China, Egypt, Saudi Arabia, Vietnam and Syria.

Attacks on female journalists has seen a particularly strong increase, with 35% more women journalists being imprisoned in 2020 compared to 2019. There’s also been a fourfold increase in “arbitrary arrests” of journalists this year, a majority of which appear to have been related to their coverage of the COVID-19 pandemic. According to Reporters Without Borders:

“While most arrested journalists were held for just a few hours or, in some cases, a few days or weeks), 14 journalists who were arrested in connection with their coverage of the pandemic are still being held at the end of the year.”

Murders of journalists doubled in 2020

CPJ also reports that murders of journalists more than doubled in 2020, compared to 2019. The murders are labeled as “retaliatory killings” by gangs and militants in “violent but democratic nations,” and the murdered journalists were most often covering political issues.

In all, 30 journalists were killed, worldwide, in 2020 in relation to their work. Of those, 21 were murdered, a significant jump from the 10 murdered in 2019. An additional 15 deaths are also still under investigation by the CPJ to ascertain whether journalism was the motive, so the end tally could be higher still.

The countries with the highest numbers of retaliatory murders in 2020 were Mexico, Afghanistan and the Philippines. Adding insult to injury, in the vast majority of these murders, the killers go free.

As mentioned, China detained the greatest number of journalists in 2020. As of Dec. 1, 2020, 117 Chinese journalists had been placed behind bars. One of them is Zhang Zhan, a former Shanghai lawyer who was detained May 15, 2020.

She’d been posting daily video reports about the Wuhan outbreak on YouTube and Twitter since early February. While these social media platforms are blocked in mainland China, Zhang was using a virtual private network (VPN) to access the sites. According to Vice:

“Her videos stood in stark contrast to state media’s reports on the outbreak, which initially glossed over the severity of the virus and sought to highlight the heroic efforts of medical workers in treating patients.”

Dec. 28, 2020, the Shanghai Pudong People’s Court sentenced Zhang to four years in prison for “picking quarrels and provoking trouble.” According to Vice, this “vaguely-defined charge” is one “that the Chinese government often uses to silence critics.”

Zhang reportedly went on a hunger strike in June and has been force-fed through a nasal tube since then. One of Zhang’s defense attorneys told Vice she began the hunger strike because “she couldn’t accept the fact that she was punished for exercising her freedom of speech, a right laid out in the Chinese constitution,” adding that “she views compliance as an insult to herself.”

In addition to Zhang, at least three other citizen journalists who had been covering the pandemic in Wuhan — Chen Quishi, Fang Bin and Li Zehua — are also either detained or missing. Chen, who disappeared in Feb. 2020,18 is now believed to be in the custody of Chinese authorities, although his precise location is still unclear.

A similar fate appears to have befallen Li, who in his last YouTube video, posted in April, said he had been detained by police but not charged. No additional videos have been posted to his account since, so it’s unclear whether he’s been released or remains in custody. The whereabouts of Fang are also unknown.

Many countries weaponized the news in 2020

According to a June 5, 2020 article by Courthouse News, at least 16 countries had by then passed laws “targeting misinformation about the coronavirus.” According to Uladzislau Belavusau, senior researcher at the Asser Institute’s Centre for International and European Law, “Corona laws are often being used as a façade for the decline of democratic institutions …”

Countries that now have laws on the books that restrict reporting of news about COVID-19 and call for fines and/or the arrest of journalists accused of spreading misinformation about the virus are shown in the graphic below, created by the International Press Institute (IPI). 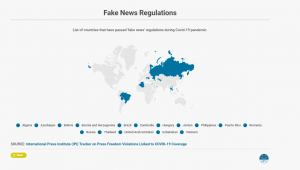 IPI, which has been monitoring press freedom restrictions during the pandemic, also released the following image, showing the number of press freedom violations recorded across the world. 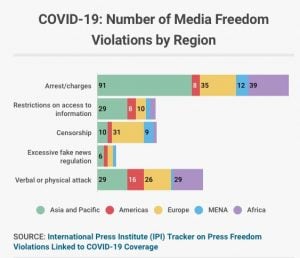 According to Barbara Trionfi, executive director of the IPI, “In all cases, the laws have been used to limit critical, legitimate reporting” about the pandemic. Marko Milanovic, professor of public international law at the University of Nottingham School of Law, agreed, telling Courthouse News the approach “is not effective,” as the laws are “broadly used to limit criticism of the government rather than stop bad actors from spreading misinformation.” Courthouse News added:

“Yordanka Ivanova, a researcher in international law at Sofia University in Bulgaria, argues that privacy regulations could curtail the spread of fake news. Limiting the amount of targeting social media companies could do, she said, could keep information from spreading widely and minimizes so-called filter bubbles, where people only see news information that aligns with their existing beliefs.”

Alina Chan, a molecular biologist at the Broad Institute of Harvard and MIT, has been outspoken about China’s apparent efforts to hide information about the source of SARS-CoV-2. In a Dec. 28, 2020, Twitter post, Chan listed a number of suspicious approaches taken by Chinese authorities since the initial outbreak in Wuhan:

“Imprisoning journalists looking into what happened in Wuhan, obstructing inquiries into mysterious pneumonia cases in Yunnan miners in 2012, failure to describe what should have been a stunning discovery of a novel FCS [furin cleavage site] in a SARS virus, removal of an extensive pathogen database …”

As detailed in “Top Medical Journal Caught in Massive Cover-Up,” Nature, one of the most prestigious medical journals, allowed authors to secretly alter SARS-CoV-2 data sets in their papers without publishing notices of correction. Chan was the one who discovered that scientists had renamed samples, failed to attribute them properly and produced a genomic profile that didn’t match the samples in their paper.

According to Chan, the database on bat and mouse viral pathogens, which had been managed by Shi Zhengli from the Wuhan Institute of Virology, has also been taken offline, further restricting scientists and researchers’ ability to analyze the potential origins of SARS-CoV-2.

We’re in an information war

All in all, China does appear intent on maintaining tight control over the pandemic narrative.

Clearly, the Chinese government does not want to release anything that might implicate it in the release of a lab-created virus, whether accidental or intentional.

But China is far from alone in this quest. Many countries around the world are clearly hell-bent on controlling the narrative as well, and are increasing attacks on journalists who dig deeper and question the logic of it all.

As reported in “Spy Agencies Threaten to ‘Take Out’ Mercola” and “Mercola Defamed by Digital ‘Anti-Hate’ Group,” this includes yours truly. According to recent media reports, intelligence agencies in both the UK and U.S. are now working to eliminate “anti-vaccine propaganda” from public discussion using sophisticated cyberwarfare tools.

That we are in an information war could not be any clearer. And, in a war where information is the key weapon, journalists are akin to soldiers. There will be casualties. Yet we cannot, we must not, stop. The freedom of every person in the world is at stake.