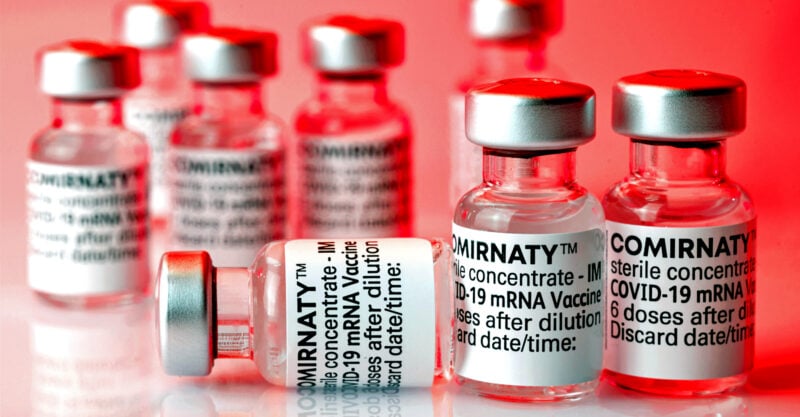 In an FDA press release, the agency said full approval of Comirnaty follows a “rigorous analysis and evaluation of the safety and effectiveness data,” and the Pfizer-BioNTech vaccine “has been, and will continue to be authorized for emergency use in this age group since May 2021.”

Pfizer’s press release announcing the approval said the Comirnaty vaccine has been available under Emergency Use Authorization (EUA) since May 2021 for the adolescent age group.

Yet, Comirnaty is not available in the U.S for any age group and is not the same formula as the Pfizer-BioNTech vaccine currently authorized under EUA and being distributed as a “fully approved” vaccine.

“The approval of Comirnaty for adolescents 12 to 15 is head-spinning,” said Mary Holland, president and general counsel for Children’s Health Defense.

“The FDA failed to convene an expert committee and failed to appropriately weigh the risk-benefit profile of this vaccine for this age group. Even Vaccine cheerleader Dr. Paul Offit acknowledged FDA decisions are being made based on political pressure, not science when, in commenting on the agency’s vote last week to allow reformulated booster shots, he said it felt like ‘the fix was in.’”

Holland said that at base, “this is a move by pharma to ensure liability protection” under the National Childhood Vaccine Injury Act of 1986. Some states likely will attempt to put Comirnaty on the childhood vaccine schedule, despite the myriad known and unknown risks, Holland said.

“Pfizer‘s fraud and collusion with government is becoming more evident by the day,” Holland said. “CHD, already challenging the authorizations for those six months through age 11, will be at the forefront of challenging this approval for teenagers.”

Efficacy claims based on old analysis of 16- to 25-year-olds — before Delta, Omicron variants

Pfizer said Friday’s approval is based on data from a Phase 3 clinical trial of 2,260 participants ages 12 through 15.

About half of the participants, “elicited SARS-CoV-2–neutralizing antibody geometric mean titers (GMTs)” demonstrating “strong immunogenicity in a subset of adolescents one month after the second dose,” Pfizer said.

It is unknown what happened to antibody levels after one month, but peer-reviewed research suggests vaccine protection conferred by second and third doses of Pfizer’s COVID-19 vaccine wanes rapidly against the Omicron variant.

“Our study found a rapid decline in Omicron-specific serum neutralizing antibody titers only a few weeks after the second and third doses of [the Pfizer-BioNTech] BNT162b2,” said the authors of a May 13 study published in JAMA.

To further support its claim that Comirnaty is effective in the 12 to 15 age group, Pfizer used an old analysis of 16- to 25-year-olds conducted before the Delta and Omicron surges.

“The efficacy analysis was conducted between November 2020 and May 2021, which was before the Delta and Omicron surges,” and the “only SARS-CoV-2 variant of concern identified from the confirmed COVID-19 cases in this age group was Alpha,” Pfizer said in its press release.

During a June 28 meeting of the FDA’s Vaccine and Related Biological Products Advisory Committee (VRBPAC), vaccine experts raised concerns that neutralizing antibodies did not correlate to clinical protection — noting Moderna’s COVID-19 vaccine had a two-fold increase in neutralizing antibody levels compared with Pfizer’s vaccine during clinical trials, but it did not translate into a clinically significant difference in terms of protection against severe disease.

Dr. Ofer Levy, VRBPAC member and infectious disease physician at Boston Children’s Hospital, said during the meeting there is still “no established correlate of protection,” referring to the level of antibodies needed to confer protection.

“You have a lot of data now,” Levy told Pfizer. “What is your relative protection?”

“I would say there is no established correlate of protection,” Kena Swanson, Ph.D., vice president of viral vaccines at Pfizer, told Levy.

“I would like to hear from FDA what their overall approach will be around improving our understanding of correlate protection. We spend a good amount of time reviewing antibody data. We have no doubt antibody data is important. We don’t have a level of antibody that anybody is comfortable stating is correlated [with] protection.

Levy, who said antibodies are important, but T cells are more important, called for federal leadership to establish a “standardization of the T-cell assay and encourage or in fact require the sponsors to gather that information.”

“So what is the effort to standardize the pre-clinical assays?” Levy asked. “This is an effort that’s critical not just now but for future cycles of vaccine revision. If we aren’t able to define a standard for correlate protection we are fighting with one arm behind our back.”

Dr. Peter Marks, head of the FDA’s Center for Biologics Evaluation and Research, acknowledged the importance of Levy’s question and said they are “having conversations” with colleagues at the National Institutes of Health and throughout government about how they might move forward, but it is something they “don’t have an answer to yet.”

Marks said as vaccines are developed in the future, it will “become even more important” to define a standard of correlate protection because “we won’t be able to have a large naive population to vaccinate with newer vaccines.”

“We will need to understand the T-cell response better,” Marks said. “I take your point, it’s just that we haven’t solved the problem yet.“

Comirnaty not available in the U.S.

According to Pfizer’s press release, Comirnaty was previously made available to the 12 to 15 age group in the U.S. under EUA and 9 million U.S. adolescents in this age group have completed a primary series.

“The vaccine, sold under the brand name Comirnaty for adults, has been available under an emergency use authorization since May 2021 for the 12-15 age group,” Reuters reported. “It will now be sold under the same brand name for adolescents as well.”

Yet, Pfizer’s information hotline says it has no specific information on when Comirnaty will be available.

The FDA said Friday the Pfizer-BioNTech vaccine “has been, and will continue to be, authorized for emergency use in this age group since May 2021.”

The CDC’s website states that Comirnaty is “not orderable.”

A branch of the U.S. Department of Health and Human Services overseeing the Strategic National Stockpile indicated Comirnaty was not available because Pfizer did not have time to change the labels.

According to FDA documents, Comirnaty is not available in the U.S. and nobody has received a fully approved and licensed COVID-19 vaccine.

“Comirnaty has not been made available under EUA,” said Dr. Madhava Setty, physician and senior science editor for The Defender.

“The FDA and Pfizer have already stated very quietly, that they have no intent of manufacturing Comirnaty for distribution. Everyone is getting the non-licensed formulation that carries no liability for pharmaceutical companies.”

The CDC website confirms this, stating the Comirnaty formulation “will not be manufactured or made available in the near term even if authorized.”

As The Defender reported, there were “several bizarre aspects to the FDA approval” that proved confusing — which led to CHD suing the FDA over its approval of Comirnaty.

The FDA acknowledged that while Pfizer had “insufficient stocks” of the newly licensed Comirnaty vaccine, there was “a significant amount” of the Pfizer-BioNTech COVID vaccine — produced under EUA — still available for use.

The FDA said the Pfizer-BioNTech vaccine under EUA should remain unlicensed but could be used “interchangeably” with the newly licensed Comirnaty product.

The FDA also said the licensed Pfizer Comirnaty vaccine and the existing Pfizer-BioNTech vaccine were “legally distinct,” but proclaimed their differences did not “impact safety or effectiveness.”

Yet, there is a “huge real-world difference” between products approved under EUA compared with those the FDA has fully licensed.

EUA products are experimental under U.S. law and cannot be mandated. A licensed vaccine, such as Comirnaty, can be mandated by employers and schools.

Although Pfizer’s Comirnaty vaccine can be mandated, it has no liability shield. Vials of the branded product, which say “Comirnaty” on the label, are subject to the same product liability laws as other U.S. products.

Only COVID-19 vaccines distributed under EUA — which in the U.S. includes Pfizer-BioNTech, Moderna and Johnson & Johnson — have liability protection under the 2005 Public Readiness and Preparedness Act (PREP).

Under PREP, the only way an injured party can sue a pharmaceutical company for an injury caused by an EUA vaccine is if he or she can prove willful misconduct and if the U.S. government has also brought an enforcement action against the party for willful misconduct. No such lawsuit has ever succeeded.

Comirnaty cannot receive liability protection unless it is fully approved for children and added to the CDC’s immunization schedule bringing it under the auspices of the National Vaccine Injury Compensation Program.

The FDA on Dec. 16, 2021, approved a supplement to the Comirnaty BLA to include a new 30 mcg dose formulation that uses the Tris buffer instead of the PBS buffer used in the originally approved vaccine.

The Pfizer-BioNTech vaccine may contain either the PBS buffer or tris buffer, except for the 5 to 11 age group. The Comirnaty vaccine contains the Tris buffer.

The Pfizer-BioNTech vaccine used for the 5 to 11 age group uses a Tris buffer, despite clinical trials having been conducted using Pfizer’s vaccine containing the PBS buffer.

According to Pfizer’s July 8 press release, the FDA relied upon studies conducted prior to the formula change to justify the approval of Pfizer’s Comirnaty vaccine for adolescents ages 12 to 15.

The type of buffer used in a COVID-19 vaccine can affect the potency of the vaccine, how it is stored and the propensity to develop potential adverse events, TrialSite News reported.

​​According to Cleveland Clinic, Tris is commonly used for the prevention and treatment of metabolic acidosis associated with various clinical conditions such as heart bypass surgery or cardiac arrest. It is also used in other vaccines, including Moderna’s COVID-19 vaccine, dengue, smallpox and Ebola vaccines.

The FDA categorizes tromethamine as a category C drug and suggests using tromethamine only if clearly needed.

It is unknown if tromethamine will harm an unborn baby, but animal reproduction studies have shown an adverse effect on the fetus, and there are “no adequate and well-controlled studies in humans.”

“The FDA-evaluated manufacturing data [to] support the change in this inactive ingredient and concluded it did not impact the safety or effectiveness of the product,” Marks, said during an October 2021, press briefing.

Yet, no human or animal trials were conducted to determine the safety or efficacy of the new formula.