Fauci Tests Positive for COVID After 4 Doses, Gets Grilled at Senate Hearing on Response to Pandemic

Dr. Anthony Fauci, director of the National Institute of Allergy and Infectious Diseases, tested positive for COVID-19, his office said Wednesday. Fauci, who is quadruple-vaxxed, was experiencing “mild symptoms.” 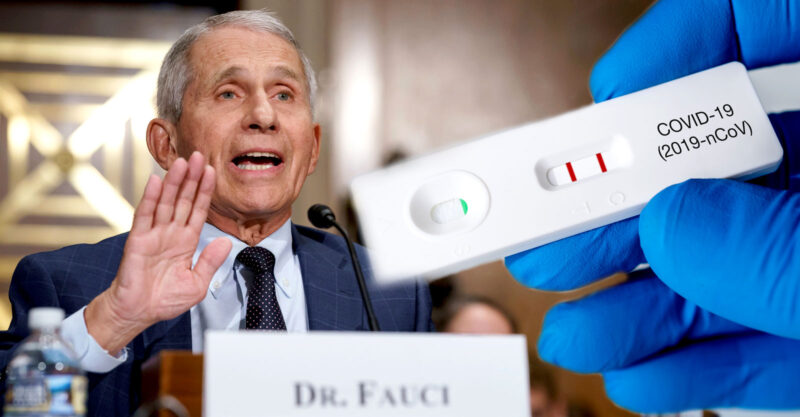 The NIAID said Fauci, 81, tested positive for the virus through a rapid antigen test and is currently “experiencing mild symptoms.”

“Dr. Fauci will isolate and continue to work from his home,” the statement said. “Dr. Fauci will follow the COVID-19 guidelines of the Centers for Disease Control and Prevention [CDC] and medical advice from his physician and return to the NIH [National Institutes of Health] when he tests negative.”

This is the first time Fauci, who is quadruple-vaxxed against COVID-19, has announced he’s tested positive for the virus.

Despite testing positive, Fauci today testified remotely during a hearing before the Senate Committee on Health, Education, Labor and Pensions, where he was grilled about the federal response to the pandemic.

“Our current vaccines have maintained their effectiveness for preventing severe COVID-19,” Fauci said, referring to the Omicron variant during his opening statement. “Individuals who have received only their primary vaccine regimen have a greater likelihood of getting infected with the Omicron variant than with previous variants.”

“Importantly, booster shots have been shown to significantly reconstitute and enhance the level of antibodies that neutralize the Omicron variant and in sub-lineages,” he added.

In May 2021, in an interview on MSNBC, Fauci said people who got vaccinated would not get infected.

“When people are vaccinated, they can feel safe that they are not going to get infected.” —Fauci

“The situation is so clear, the data affirm if you get vaccinated you are protected, even with the Delta variant — which by the way has a greater capacity to spread from person to person — and when you’re infected it has a greater likelihood of giving you serious disease. We know that as a fact.”

According to Pfizer’s high-risk and standard-risk clinical trials, vaccinated individuals who received a SARS-CoV-2 vaccine within 12 months of screening were excluded from clinical trials that assessed the safety and efficacy of the drug.

Originally, Pfizer was going to include vaccinated individuals in at least one trial — the EPIC-SR — but changed the exclusion criteria between March 9 and April 5, to exclude all vaccinated people.

According to an article by Dr. Paul Fenyves, a primary care physician with Weill Cornell Medicine in New York, CDC data show as of May 18, 76% of U.S. adults had been vaccinated, and an estimated 58% of Americans already had COVID-19 — so the trial supporting authorization of Paxlovid was not directly applicable to a majority of Americans.

“Paxlovid would be significantly more effective in people who have not been primed by vaccination or prior infection, so the trial supporting its use serves to exaggerate the benefit that most people would see from the medication,” Fenyves said.

Although Pfizer began a clinical trial of Paxlovid in vaccinated high-risk individuals, the trial combines vaccinated and unvaccinated patients, potentially clouding the issue, Fenyves said. “More importantly, results of the trial will not be made available until November 2022.”

Fenyves pointed out that Americans have seen scandals with drugs like Vioxx being sold despite known cardiovascular risks and OxyContin contributing to the opioid epidemic due to lax oversight, and a “much-needed independent review” of Paxlovid’s pharmaceutical clinical trial was needed.

Fenyves said Pfizer’s first trial was designed to overstate the efficacy of Paxlovid because the company’s goal was to maximize sales, but he was surprised the U.S. government would buy $5 billion worth of Paxlovid without requiring the pharma giant to show how the drug performs in high-risk people who have been vaccinated or previously infected.

CDC Director Dr. Rochelle Walensky on May 24 issued a health advisory to people taking Pfizer’s Paxlovid. Walensky warned the drug could lead to a rebound in COVID-19 symptoms, but claimed the benefits of the drug outweigh the risks.

“If you take Paxlovid, you might get symptoms again,” Walensky told CBS News. “We haven’t yet seen anybody who has returned with symptoms needing to go to the hospital. So, generally, a milder course.”

Paxlovid, antiviral medication, is taken over the course of five days. A five-day course of Paxlovid costs about $500.

After a patient recovers from COVID-19, the rebound appeares to occur between two and eight days later, according to the CDC.

People who experience a “COVID-19 rebound” after treatment with Paxlovid can be contagious even if they don’t have any symptoms, researchers warned.

The CDC, citing case reports and concerns that relapsed patients could spread the virus, advised users to isolate themselves for another five days if symptoms rebound.

“I am shying away from giving it to people who are very low-risk, and are not terribly ill, particularly people who are vaccinated and boosted,” Dr. Bruce Farber, chief of public health and epidemiology for Northwell Health, told Reuters.

Pfizer, in an email, said it is monitoring the issue but believes the return of detectable SARS-CoV-2 is uncommon and not “uniquely associated” with its drug. “We have not seen any resistance emerge to date in patients treated with Paxlovid,” a Pfizer spokesperson told Reuters.

As The Defender reported last month, NIH researchers said they would investigate how often and why coronavirus levels rebound in some patients who complete a five-day course of Paxlovid.

Clifford Lane, deputy director for clinical research at the NIAID, told Bloomberg it was a priority and a “pretty urgent thing for us to get a handle on.”

Lane said the agency is discussing with scientists at the CDC possible epidemiological and clinical studies to examine post-Paxlovid rebound.

In response to reports of patients relapsing after taking Paxlovid, Pfizer CEO Albert Bourla suggested they take more of the treatment, contrary to the established protocol, prompting a U.S. Food and Drug Administration (FDA) official to contradict Bourla.

John Farley, M.D., director of the Office of Infectious Diseases, in the FDA Updates on Paxlovid for Health Care Providers wrote:

“There is no evidence of benefit at this time for a longer course of treatment (e.g., 10 days rather than the 5 days recommended in the Provider Fact Sheet for Paxlovid) or repeating a treatment course of Paxlovid in patients with recurrent COVID-19 symptoms following completion of a treatment course.”

As The Defender reported in March, Pfizer stands to make $54 billion in sales from its COVID-19 vaccine and Paxlovid.

Robert F. Kennedy, Jr., Children’s Health Defense chairman and chief legal counsel, told The Defender that taxpayers are paying billions for vaccines that don’t work, they get COVID-19 anyway and then they pay billions more for an inferior treatment.