Dr. Anthony Fauci said Tuesday he is experiencing a rebound of COVID-19 symptoms after taking Paxlovid, Pfizer’s COVID-19 antiviral pill. Taxpayers are on the hook for $10.5 billion worth of the experimental treatment, under a deal the White House cut with Pfizer. 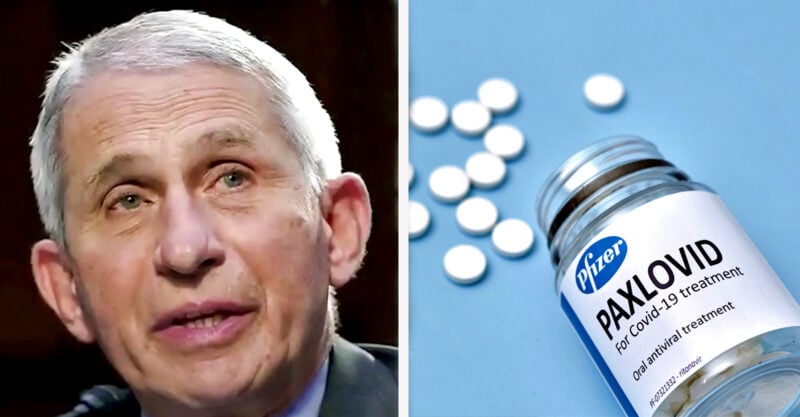 Fauci tested positive for COVID-19 on June 15, despite being quadruple-vaccinated, initially experiencing “mild symptoms,” according to the NIAID.

Due to his age — 81 — which put him at high risk for developing complications, Fauci was prescribed Paxlovid.

The drug, which is made from a combination of nirmatrelvir and ritonavir, in December 2021 was granted Emergency Use Authorization to treat COVID-19.

“After I finished the five days of Paxlovid, I reverted to negative on an antigen test for three days in a row,” Fauci said Tuesday in a remote interview during the Foreign Policy’s Global Health Forum.

“And then on the fourth day, just to be absolutely certain, I tested myself again. I reverted back to positive.”

“It was sort of what people are referring to as a Paxlovid rebound,” Fauci said. Over the next day, he began to feel “really poorly,” and “much worse than in the first go-around,” he added.

COVID-19 can make a comeback after an infected person has gone through a round of Paxlovid, according to a May 24 advisory from the Centers for Disease Control and Prevention (CDC).

According to the CDC:

“Recent case reports document that some patients with normal immune response who have completed a five-day course of Paxlovid for laboratory-confirmed infection and have recovered can experience recurrent illness two to eight days later, including patients who have been vaccinated and/or boosted.”

The agency continued to recommend the oral antiviral drug as a treatment despite the possibility of recurrences, Reuters reported.

In late April, National Institutes of Health (NIH) researchers said they will investigate how often and why coronavirus levels rebound in some patients who complete a five-day course of Paxlovid.

“It is a priority,” Dr. Clifford Lane, deputy director for clinical research at the NIAID, told Bloomberg. It’s “a pretty urgent thing for us to get a handle on.”

On May 17, political commentator Kim Iversen weighed in on reports that NIH researchers were investigating how often and why coronavirus levels rebound in some patients.

“Turns out the treatment drug Paxolvid, which is made by Pfizer, has a problem,” Iversen told viewers of The Hill’s “Rising.”

“Pfizer says its real-world data indicates the relapses occur in fewer than 1 in 3,000 patients, but again, we’ve heard this phrase throughout the pandemic — that something is ‘extremely rare,’ like getting the virus after being vaccinated or having a case of myocarditis … it turns out these events are more common than they first appear,” Iversen said.

Iversen criticized the U.S. Food and Drug Administration (FDA) for its rushed approval of drugs such as Paxlovid while denying the public access to older, often less-expensive treatments.

Paxlovid retails for $700 for a five-day course, but the U.S. government cut a deal to pay half that.

In November 2021, the U.S. government sealed a business deal with Pfizer to the tune of $5.3 billion for 10 million treatment courses of the experimental antiviral treatment.

Then in January, the government doubled its order to 20 million courses of Paxlovid, bringing the U.S. taxpayer bill to $10.6 billion.

Two months later, Biden announced a new “Test to Treat” initiative, which allows Americans who test positive for COVID-19 at a pharmacy to obtain free antiviral pills “on the spot.”

Biden said he ordered “millions of pills” from Pfizer, paid for by U.S. tax dollars, to allow them to be passed out “for free.”

Dr. David Gortler, pharmacologist, pharmacist, FDA and healthcare policy oversight fellow and FDA reform advocate at the Ethics and Public Policy Center think tank in Washington, D.C., on Tuesday questioned why the government continues to invest in Paxlovid, given what he called the drug’s “lackluster” performance.

In an article published on CD Media, Gortler said:

“In December 2021 Pfizer claimed initial study findings showed that Paxlovid cut the risk of hospitalization and death by nearly 90% in people with mild to moderate coronavirus infections.

“Without context this statement is grossly misleading.

“Just about everyone who gets the existing COVID-19 mutation will have mild or moderate disease, yet the drugmaker limited its study to people who were unvaccinated and who faced the greatest risk from the virus due to age or health problems, such as obesity.

“An updated more recent analysis from 1,153 patients (out of a possible 2,246 patients) showed a lackluster, non-significant 51% relative risk reduction.”

“A sub-group analysis of 721 vaccinated adults with at least one risk factor for progression to severe COVID-19 showed a non-significant relative risk reduction in hospitalization or death (treatment arm: 3/361; placebo: 7/360).”

Gortler pointed out that the Senate’s $10 billion COVID-19 relief bill includes a requirement that at least half the money be spent on therapeutics.

“But why did Biden gamble every dollar on one, single drug from one single drugmaker [original emphasis]? Gortler asked. “Why was Pfizer chosen to satisfy the therapeutics clause by itself?

“The White House is now on the hook for an additional $5.3 billion for a total of $10.6 billion for an ineffective COVID-19 treatment that Pfizer had already developed, when they could have spent almost nothing and promoted the established safety and efficacy of hydroxychloroquine and ivermectin with an established, superior outcome.”

Pfizer stands to make $54 billion in sales in 2022 from its vaccine and Paxlovid, The Defender reported in March.