A federal judge on Tuesday ordered Dr. Anthony Fauci and the White House Press Secretary to hand over their communications with five social media giants. The ruling stems from a lawsuit alleging the Biden administration colluded with the companies to censor COVID-19 viewpoints that weren’t aligned with the administration’s official narrative. 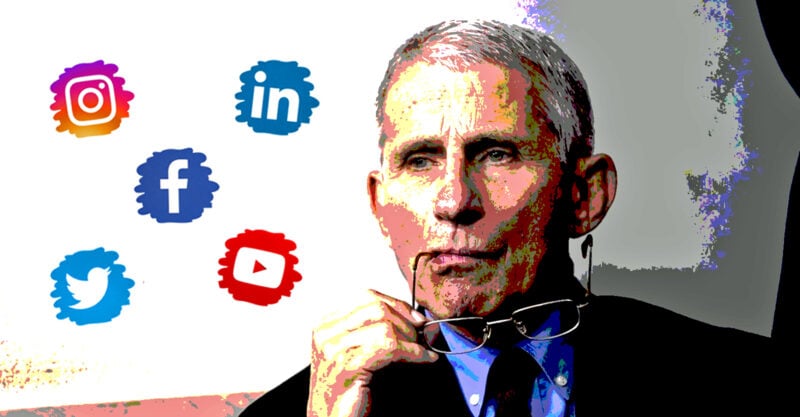 U.S. District Judge Terry Doughty in July ordered the Biden administration to swiftly produce records requested by the plaintiffs as part of the discovery process.

The requests resulted in a cache of documents revealing more than 50 Biden administration workers and 12 U.S. agencies had been involved in a censorship push over social media.

However, some government officials — including Fauci — refused to provide records or answer any questions posed by the plaintiffs, claiming the communications were protected under executive privilege.

Judge Doughty on Tuesday broke the stalemate by ruling that both Fauci and Jean-Pierre must comply with the interrogatories and hand over the requested records.

“First,” Judge Doughty said in the ruling, “the requested information is obviously very relevant to Plaintiffs’ claims. Dr. Fauci’s communications would be relevant to Plaintiffs’ allegations in reference to alleged suppression of speech relating to the lab-leak theory of COVID-19’s origin, and to alleged suppression of speech about the efficiency of masks and COVID-19 lockdowns. Jean-Pierre’s communications as White House Press Secretary could be relevant to all of Plaintiffs’ examples.”

According to Judge Doughty:

“Government Defendants are making a blanket assertion of all communications to social media platforms by Dr. Fauci, and Jean-Pierre based upon executive privilege and presidential communications privilege.

“Plaintiffs concede they are not asking for any internal White House communications, but only external communications between Dr. Fauci and/or Jean-Pierre and third-party social media platforms.

“This Court believes Plaintiffs are entitled to external communications by Jean-Pierre and Dr. Fauci in their capacities as White House Press Secretary and Chief Medical Advisor to the President to third-party social media platforms.”

Judge Doughty ordered Fauci and Jean-Pierre to comply within 21 days, and said Fauci must provide complete answers to questions about his role as NIAID director.

In response to the ruling, a Biden administration official defended the administration’s actions, telling Fox News, “As we have said over and over again since the beginning of the administration in our battle against COVID-19, it has been critical for the American people to have access to factual, accurate, science-based information.”

“We believe in and we support freedom of speech, and we also believe it is important for all media platforms, including social media, to represent factual scientific information and combat misinformation and disinformation that can cost lives,” the official concluded.

However, Mary Holland, president and general counsel of Children’s Health Defense, told The Defender the ruling is “really good news.”

“Up until now, Dr. Fauci has operated under this cloak of ‘untouchableness,’ thinking he has been above the law. He likely didn’t expect his emails to be made public.

“We can only imagine what this tranche of emails will likely reveal about Dr. Fauci’s bare-knuckled censorship — it won’t be pretty.”

Holland said Judge Doughty’s ruling was “even-handed” because he “granted some of the Plaintiff Attorney Generals’ discovery requests and denied others.”

For instance, Doughty denied the Plaintiffs’ request that the HHS conduct a search for relevant records among its 80,000 employees because it would be “unduly burdensome.” However, he said the HHS employees identified in the documents from Meta needed to respond to the discovery requests.

“Most importantly, the court ordered that Dr. Fauci’s and Karine Jean-Pierre’s external emails to social media platforms must be produced by September 27, within 21 days of the ruling.

“Stay tuned and get the popcorn. Those emails likely will reveal how the censorship has worked — and the path to ending it now.”

Jenin Younes, litigation counsel for the New Civil Liberties Alliance and a lawyer for some of the Plaintiffs, told The Epoch Times:

“We know from the previous round of discovery that efforts to censor the speech of those who disagree with the government on covid policy have come from the top.

“Americans deserve to know Anthony Fauci’s participation in this enterprise, especially since he has publicly demanded that specific individuals, including two of our clients, Jay Bhattacharya and Martin Kulldorff, be censored on social media.”

“It is time for Dr. Fauci to answer for his flagrant disregard for Americans’ constitutional rights and civil liberties,” Younes added.

New Civil Liberties Alliance in August joined the lawsuit, stating in its case summary that the suit also represents epidemiologists and co-authors of the Great Barrington Declaration, Drs. Jayanta Bhattacharya and Martin Kulldorff, as well as Dr. Aaron Kheriaty and Jill Hines.

As part of Tuesday’s ruling, Judge Doughty also granted the plaintiffs’ request to question additional government officials based on their review of the records obtained from their previous discovery request.

Although Fauci and Jean-Pierre did not comply with the initial discovery request, the government records that were obtained “unveiled an army of federal censorship bureaucrats, including officials arrayed at the White House, HHS, DHS, CISA, the CDC, NIAID, the Office of the Surgeon General, the Census Bureau, the FDA, the FBI, the State Department, the Treasury Department, and the U.S. Election Assistance Commission,” the NCLA said in a Sept. 1 press release.

“Communications show these federal officials are fully aware that the pressure they exert is an effective and necessary way to induce social-media platforms to increase censorship. The head of the Cybersecurity and Infrastructure Security Agency even griped about the need to overcome social-media companies’ ‘hesitation’ to work with the government,” NCLA said.

The defendants identified 45 officials across five federal agencies as the officials who communicated with social media companies about misinformation and censorship.

However, email and other documents provided by Meta, Twitter and Google showed several other officials — including officials at other federal agencies and the White House — were involved in the effort.

Moreover, Meta CEO Mark Zuckerberg recently disclosed that the FBI contacted him about disinformation before the 2020 election — and that Facebook suppressed the circulation of the first Hunder Biden laptop story.

“With each of these new revelations, Plaintiffs have approached Defendants and requested that they supplement their discovery responses to include responsive communications from the newly disclosed federal officials,” the Plaintiffs said in a recent filing.

“Defendants have refused to do so, on the grounds that none of these newly discovered officials have been sued or served with discovery as yet, and that it would be unduly burdensome to identify and produce their communications.”

The plaintiffs asked to file an amended complaint, allowing them to name all the additional officials as defendants to address the issues.

The amended complaint, they said, will allow them to request records and information from each of the officials who were not initially disclosed by the Biden administration.

Judge Doughty on Tuesday gave the plaintiffs 30 days to file an amended complaint with the additional agencies and/or individuals.

Children’s Health Defense in August 2020 brought a similar case against Meta Platforms Inc., also known as Facebook, its “independent fact-checkers” and Mark Zuckerberg for alleged collusion with the U.S. government in censoring the American public.

The CHD lawsuit alleges Facebook entered into an agreement with the White House to censor an entire category of speech, de-platformed CHD Chairman Robert F. Kennedy, Jr., and removed CHD’s “donate” button on Facebook, directing traffic instead to a third-party fact-checking organization that solicits donations.

CHD filed an amended complaint in December 2020. The federal district court in the Northern District of California dismissed the case on June 29, 2021.

Judge Susan Illston, in a 45-page decision, said CHD’s allegations — that Facebook is effectively a “state actor” on behalf of the federal government and engaged in false advertising and racketeering — failed to state legal claims.

CHD appealed. After arguing against the motion to dismiss, CHD now awaits a decision.