In an interview with The Defender, Dominique De Silva described her frustration trying to get answers for the neurological complications she developed after her first dose of Pfizer’s COVID vaccine, and with doctors who dismissed her symptoms and refused to acknowledge the vaccine as a possible cause. 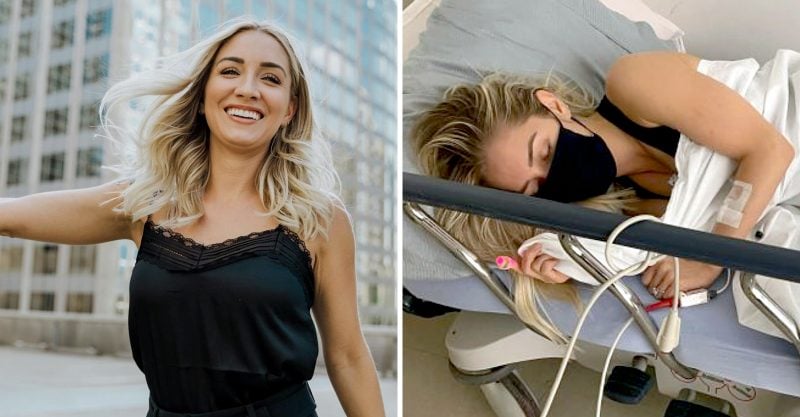 Dominique De Silva, 30, is still searching for answers from doctors after developing a long list of debilitating conditions, including severe neurological complications, pain and at times, an inability to walk, following her first dose of Pfizer’s COVID vaccine.

In an interview with The Defender, Dominique, who goes by @QueenCityDom on Instagram, said she was moving from Las Vegas to North Carolina to start her new life, get married and open her real estate practice when she decided to get vaccinated. Because she has only one living parent, she wanted to protect her mother and other loved ones.

“This virus consumed me to the point where I was wiping down my groceries with Clorox wipes, masking up everywhere I went, staying away from my friends, using hand sanitizer 24/7 and living in complete fear of getting sick,” Dominique wrote in an update on her GoFundMe. “So, of course, when I had the opportunity to get my V [vaccine], I took it as soon as I could because I was ready for life to go back to how it was before.”

On March 18 — two days before her big move — she and her now husband received their first and only dose of Pfizer’s vaccine.

Shortly after, Dominique said she felt the typical fatigue she was warned about before getting the vaccine, but she also noticed changes to her vision. “I think I just blew it off because maybe it was just ironic,” she said. “It felt like everything was super bright and too much to take in.”

Dominique said she felt awful, but thought maybe she was tired from getting ready to move across the country. “I felt like my brain was sick,” she said. “That’s the best way I can describe it because it is a feeling I had never had before.”

The next day Dominique got on the tram to the airport and said it felt like an elephant was sitting on her chest. “I didn’t know what was happening with my heart but it did not feel good,” she said. “Before I got on the plane, I got hit by the beginnings of a migraine and started seeing spots in my vision, but the migraine never actually came.”

Within two weeks of receiving Pfizer’s vaccine, Dominique noticed cramping pains in her legs that turned into what felt like growing pains late in the evening. The next morning the leg pain returned.

“I got up and I had to grab on to the wall because my legs were giving out on me and the pain started kicking back up. So I walked around my bed to the bathroom and it took a really long time to get from point A to point B.

“My legs were weak and numb, and I had trouble walking. At that moment that’s when I realized the vaccine had done something to me.”

The pain never went away and after seven days, Dominique decided she couldn’t wait for her new insurance to kick in before seeing a doctor.

“My husband took me to the hospital that night and they admitted me,” she said. “I let the doctor know I had gotten my vaccine two weeks and three days ago, but he brushed it off and said what I was experiencing was absolutely not connected to the vaccine.”

After running a full brain and spine MRI along with countless blood tests, the neurologist on duty was unable to find the cause of Dominique’s symptoms. Although some conditions were ruled out, her symptoms were not treated or resolved and she was told to follow up with a neurologist.

The first neurologist Dominique saw was very open to the possibility of the vaccine being the cause, she said. “He said he’s seen some weird stuff happening with the vaccines, but he wasn’t sure what to do about it,” Dominique explained.

Next, Dominique visited a traditional neurologist. “As soon as he heard me say I got my vaccine two weeks before this started happening, it seemed like he disconnected from the appointment,” she said.

The neurologist reviewed Dominique’s MRI and said there was “nothing to see here” and she needed to see a therapist. “We go to these people whom we trust, who told us to get these shots, but when something is wrong with us, we’re told it is in our heads,” she said.

Dominique then went to a functional neurologist who “heard her loud and clear,” she said. The neurologist told her, “Absolutely this is something the vaccine triggered in you.”

The doctor told Dominique she was experiencing dystonic storms, and recommended glutathione, turmeric and other supplements to address her dystonic movements and inflammation.

Dominique changed her insurance and got into a specialist at a prestigious hospital for further testing and diagnosis, but it was going to be a four-month wait.

Her symptoms became so bad she went to the emergency room so she could be seen sooner and waited 22 hours before an “episode” occurred and staff finally performed a CT scan to rule out a stroke.

“The CT came back clear,” Dominique said. “The doctor started clapping in front of my face, pinched me to get the episode to stop and recommended seizure medication.”

Dominique said the doctor didn’t recognize the adverse reaction and said “there’s no test to confirm it was caused by the vaccine even if it was.” However, a physician’s assistant and nurse recognized what she was experiencing as a vaccine injury.

While at the hospital, Dominique also had a D-dimer test to check for blood clots. It came back positive, but she wasn’t taken seriously, she said.

Dominique followed up with a movement specialist who also could not find what was wrong with her and recommended she see a therapist.

“She looked at the April MRI, the CT scans, the EEG and the office exam,” Dominique said. “She came back in and said, ‘You’re not going to like what I have to say but I think this is psychosomatic and you need to see a therapist.’”

“Why is another doctor telling me this is in my head?” Dominique said, “This is not in my head.”

Dominique made contact with two functional neurologists and a physician in New York, who did blood work and extensive testing that hadn’t been done before. Dominique’s PET-MRI, EMG nerve study, nerve conduction test and skin biopsy all came back abnormal.

Dominique was diagnosed with postural orthostatic tachycardia syndrome (POTS), a condition she did not have prior to being vaccinated, and autoimmune chronic demyelinating polyradiculoneuropathy — a rare type of autoimmune disorder where the body attacks the fatty coverings on the fibers that insulate and protect the nerves.

She also had neuropathy and brain scan abnormalities. 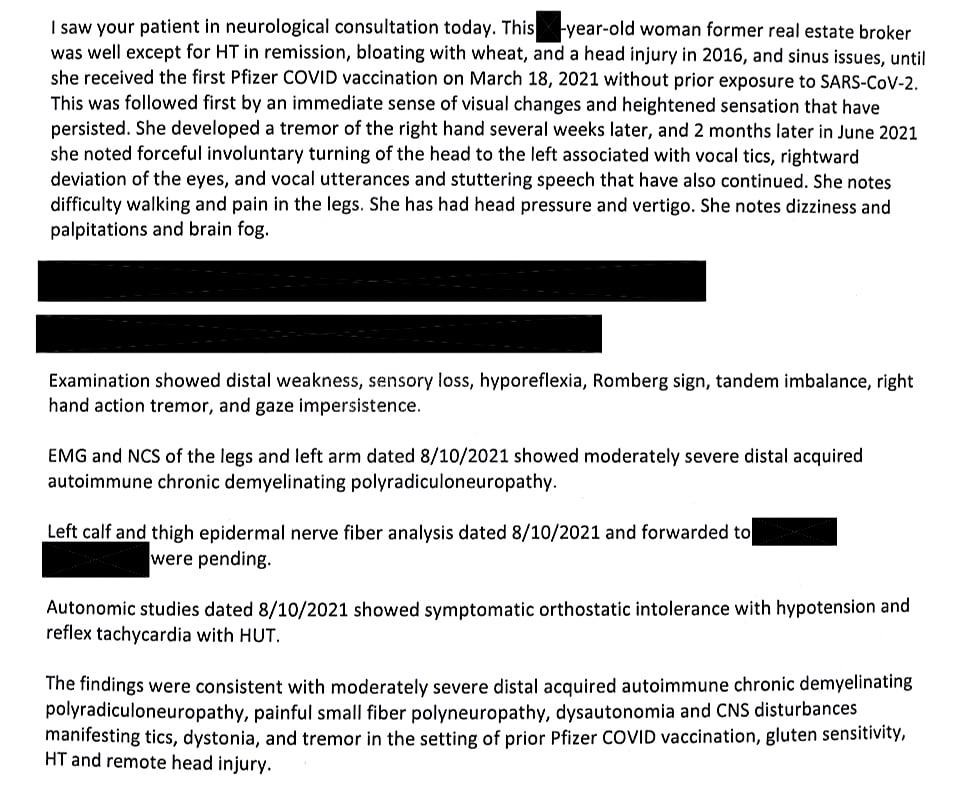 Dominique said her doctor in New York believes in vaccines, but said she “obviously had a bad reaction.” Dominique sent her results to the neurologist at the prestigious institute who said her symptoms were “just in her head.”

Dominique had no previous exposure to COVID and had a history of autoimmune hashimoto’s thyroiditis, though it had been in remission since 2019. She is currently undergoing more testing to determine the extent of her injuries.

Dominique contacted a local member of Congress about her vaccine injury, who told her to “take it up with VAERS, the CDC and the manufacturer” — none of whom followed up.

Dominique submitted a report to the Vaccine Adverse Event Reporting System (VAERS) and contacted the Centers for Disease Control and Prevention (CDC) about her vaccine injuries. She also contacted Pfizer, who sent her a survey, which she returned in the mail.

She also reached out to Sen. Ron Johnson (R-Wis.), who has been a vocal advocate for government transparency and has recognized others who have been injured by COVID vaccines.

Dominique worked up the courage to share her story on Instagram and it went viral, but she was also harassed, bullied, sent hateful messages and received death threats. She said she has since met many people who are experiencing the same issues and are forced to do their own testing and cover the costs of their injuries.

Dominique started a GoFundMe page to raise money for her medical expenses because there is no financial assistance for people injured by vaccines outside of the Countermeasures Injury Compensation Program, which almost never awards damages.

Dominique has spent thousands of dollars on labs, scans, her PET-MRI, skin biopsy, hospital visit –– which is going to collections — and radiology bills, which she shared on her Instagram and GoFundMe page.

“I’m not here to say do or don’t do something with your own body,” Dominique said. “Do your own research and make your own decision. I wasn’t given that information and I wasn’t given that opportunity. The people that are hurt and suffering every day and aren’t working need help.”

Dominique no longer drives a car and has put her real estate practice on hold. She’s not sure if she will ever return to it. She did get married and said it was a “good day” for her symptoms, but had to figure out how to make room for a wheelchair.

On her Go Fund Me, Dominique said:

“I will never regret why I received my vaccine as I did what I believed was right for myself as well and everyone around me. I had the best intention at heart when I rolled up my sleeve and received my first dose. I knew that there wasn’t much data on these very new vaccines, however I trusted the science behind them. Unfortunately, my body reacted terribly to it and has placed me in the situation I am in today.”

Although Dominique said she believes in freedom of choice, neither she nor her husband will be getting further doses of any COVID vaccine. “This is happening to a lot of people, they just don’t want me to talk about it,” she said.

According to the most recent data from VAERS, there have been 14,485 total reports of dystonia, dystonic tremors, neurodegenerative disorders, neurological symptoms, neuropathy, polyneuropathy and tremors following COVID vaccination.