It’s not just businesses, the federal government and the military — the push is also on to mandate COVID vaccines for school children, despite evidence showing the benefits don’t outweigh the risks. 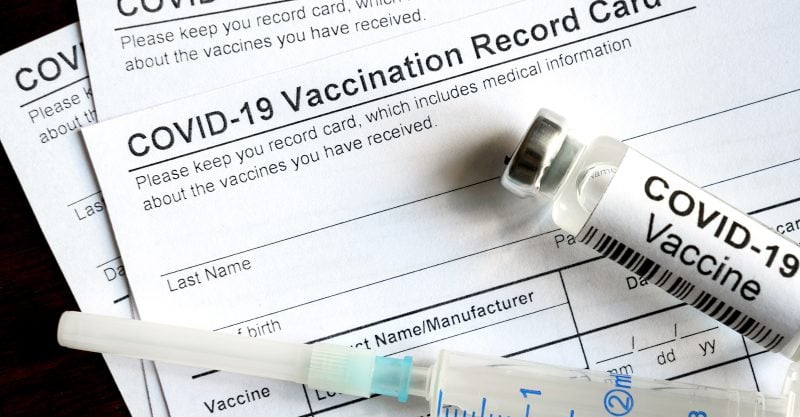 “I am glad to see the president insisting that we go forward requiring vaccinations or, if people are unwilling to do that, then regular testing at least once or twice a week, which will be very inconvenient,” Collins told ABC “This Week” anchor George Stephanopoulos.

When asked if it was time for more compulsory COVID vaccine policies, Collins said, “Yeah, I think we ought to use every public health tool we can when people are dying. Death rates are starting up again.”

“That was about as close to a yes as you could get,” Stephanopoulos said. “You clearly believe vaccine mandates could make a difference.”

.@gstephanopoulos: “Is it time for more vaccine mandates?”@NIHDirector Dr. Francis Collins: “Yeah, I think we ought to use every public health tool that we can when people are dying.” https://t.co/OFn9QFfihK pic.twitter.com/d7ajJA2nxC

“I understand how that can sometimes set off all kinds of resistance,” Collins said. “But isn’t that a shame?”

“If you’re on the fence, get off the fence. … Roll up your sleeve. Become part of the winning team.”

Dr. Peter Hotez, vaccinologist and dean of the National School of Tropical Medicine at Baylor College of Medicine, today told CNN he believes vaccine mandates for children 12 to 17 may be necessary as the school year begins.

Hotez, an outspoken proponent of vaccines, said it won’t be enough to have mask mandates in the schools. “We need all of the adolescents vaccinated, and really we need to move towards vaccine mandates for the 12- to 17-year-olds in the schools,” he said.

According to Hotez, in some states, only a quarter of the adolescent population is vaccinated, so masks and an increase in vaccination rates among students will be necessary to contain in-school spread.

“If we’re going to give our fighting chance to have a successful school year, we’re going to need everyone who is vaccine-eligible to get vaccinated and everybody masked,” Hotez said.

According to the Centers for Disease Control and Prevention (CDC), ​​compared with adults, children and adolescents who are infected with SARS-CoV-2 are more commonly asymptomatic (never develop symptoms) or have mild, non-specific symptoms, and are less likely to develop severe illness or die from COVID.

Rates of severe outcomes (e.g. hospitalization, mortality) from COVID among children and adolescents are low. In children hospitalized or admitted to the ICU, underlying medical conditions are commonly reported.

As of July 7, there were 271 COVID deaths among 5- to 17-year-olds, and 120 deaths among 0- to 4-year-olds reported to the National Center for Health Statistics.

CDC data also showed the death rate among 0- to 17-year-olds who get COVID and are subsequently hospitalized is 0.7% — with many experiencing either mild or no symptoms at all. The COVID death rate in all adolescent age categories is less than 0.1%, according to the CDC.

As The Defender reported, two papers published May 19 in the journal Hospital Pediatrics found pediatric hospitalizations for COVID were overcounted by at least 40%, carrying potential implications for nationwide figures used to justify vaccinating children.

Some physicians and scientists oppose vaccinating children against COVID because they believe the data and science show the vaccines’ risks outweigh the benefits for that age group.

Here’s what happened yesterday at FDA’s meeting discussing granting Emergency Use Authorization for COVID vaccines for children under 12.

In June, a group of 40 doctors told UK drug regulators that vaccinating kids is “irresponsible, unethical and unnecessary.”

In an open letter addressed to the Medicines and Healthcare Products Regulatory Agency, the group said no one under 18 should be vaccinated for COVID because evidence shows the virus poses almost no risk to healthy children. The authors of the letter said the risk of death from COVID in healthy children is 1 in 1.25 million.

Last month, Doctors for COVID Ethics, a Europe-based international alliance of hundreds of concerned doctors and scientists, submitted expert evidence to the  European General Court as part of a lawsuit challenging the European Medicines Agency’s late-May decision to extend emergency use of Pfizer’s vaccine for 12- to 15-year-olds.

According to the latest data from the CDC’s Vaccine Adverse Events Reporting System there have been a total of 15,741 reported adverse events among adolescents aged 12 to 17, including 947 rated as serious and 18 reported deaths.

Most employers continue to hold off on mandates due to potential employee relations issues that such a move might provoke, but many employers have taken additional measures to increase vaccine levels by offering incentives — some positive, others punitive.

For example, some employers are considering tacking on a $20 to $50 monthly surcharge to their unvaccinated workers, according to a health benefits consultant group.

“Employers have tried encouraging employees to get vaccinated through offering incentives like paid time off and cash, but with the Delta variant driving up infections and hospitalizations throughout the country — at the same time that vaccination rates have stalled — we have received inquiries from at least 20 employers over the past few weeks who are giving consideration to adding health coverage surcharges for the unvaccinated as a way to drive up vaccination rates in their workforce.”

Mercer didn’t disclose the names of companies working on the surcharges but said the amount of the surcharge being discussed is akin to the $20- to $50-a-month employers charge workers who smoke.

According to the benefit firm’s website, if an employee is unvaccinated and gets COVID, that creates higher claims costs, which can impact the employer’s bottom line and mean higher future contributions for other employees.

“Beyond plan costs, there are the public health benefits of greater vaccination rates, in addition to workplace safety considerations,” Symons wrote. “The surcharge approach is intended to cause employees to change behavior voluntarily.”

Employers on the fence about mandating the vaccine may be concerned about losing good employees. According to a recent poll, 18% of Americans say they would quit their job over vaccine or mask mandates.

The city of San Francisco is one of the most recent examples where loss of employees is a potential threat. That’s because the union representing San Francisco sheriff’s deputies said Friday up to 160 of its officers will quit or retire early if they are forced to get a COVID vaccine, the Associated Press reported.

The city issued a mandate last month requiring city employees who work in jails or other settings deemed high-risk to get vaccinated by Sept 15., or risk losing their jobs.

The San Francisco Deputy Sheriffs’ Association said on its Facebook page Friday that about 160 of 600 sheriff employees are rejecting the vaccine due to religious or other beliefs, and would rather wear masks or test weekly.

“If deputy sheriffs are forced to vaccinate, a percentage of them will retire early or seek employment elsewhere,” the statement said.

Deputy Sheriff’s Association President Ken Lomba said in an interview with Fox News the mandate “is on the extreme side” and “will not be good” for San Francisco’s public safety.

The union said the staffing level at the sheriff’s office is already low, and the loss of more deputies will affect public safety. It is asking the city to follow state guidelines, which offer employees the option of testing regularly.

The city’s human resources department denounced the union’s statement saying, “There is also an undue and unacceptable health and safety risk that is imposed upon the city, our employees and the public we serve, by those who are not vaccinated against COVID-19. Vaccines are safe, effective and readily available to our employees.”

Nancy Crowley, a spokesperson for the sheriff’s department, said officials are working with the human resources department to obtain full compliance by the deadline.

More than a week after President Biden announced federal employees would have to either get the vaccine or be subject to routine testing, social distancing and masks as a condition of employment, the U.S. Department of Defense followed with its own announcement that military personnel will be required to get the COVID vaccine by Sept. 15.

The Pentagon on Monday laid out its COVID vaccine mandate plan, which was immediately endorsed by President Biden.

In memos distributed to all troops, top Pentagon leaders said the vaccine is a necessary step to maintain military readiness.

Sec. of Defense Llyod J. Austin wrote that he would “seek the president’s approval to make the vaccines mandatory no later than mid-September, or immediately upon” approval by the U.S. Food and Drug Administration, “whichever comes first,” The Hill reported.

Austin added that Pentagon officials “will also be keeping a close eye on infection rates,” currently on the rise due to the Delta variant. If the rates begin to impact military readiness, “I will not hesitate to act sooner or recommend a different course to the president if l feel the need to do so,” Austin said. “To defend this nation, we need a healthy and ready force.”

Austin’s memo was followed by one from Army Gen. Mark Milley, chairman of the Joint Chiefs of Staff.

“The secretary of defense intends to mandate vaccinations for all service members in the coming weeks,” said Milley, adding that the military’s medical professionals recommended the move. At the bottom of his message, Milley scrawled a handwritten note: “Getting vaccinated against COVID-19 is a key force protection and readiness issue.”