Nike and Washington State University are two of the latest employers to face lawsuits from employees who lost their jobs over COVID-19 vaccine mandates. 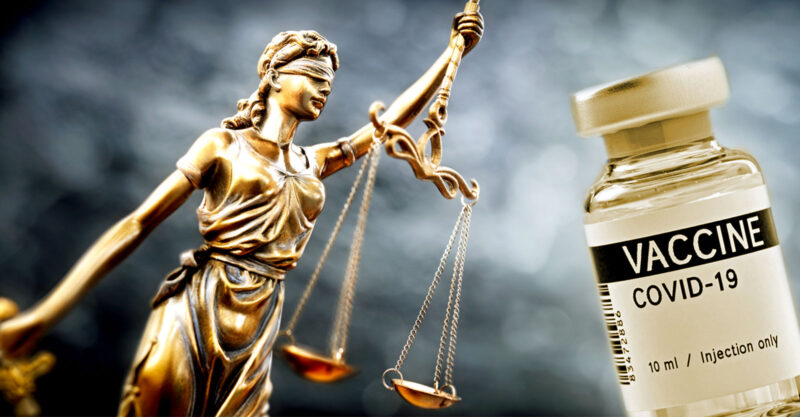 Nike and Washington State University (WSU) are two of the latest employers to face lawsuits from employees who lost their jobs over COVID-19 vaccine mandates.

The two lawsuits came on the heels of another suit filed last week by three former National Basketball Association (NBA) referees who sued the NBA after they were fired for refusing the COVID-19 vaccine on religious grounds.

It’s all part of a “wave of vaccine mandate litigation” that has grown to more than 1,000 lawsuits challenging vaccine mandates and filed primarily against employers in the last several months, according to the National Law Review.

Individual employers have had success on some of the claims made against them, but the increase in litigation is having an effect, according to the National Law Review, which reported:

“With worker shortages, changing attitudes toward COVID-19, updated CDC [Centers for Disease Control and Prevention] guidance and the litigation risks, many employers who are not required to have vaccine mandates have decided to move forward without them.”

Nike: a diverse, equitable and inclusive employer, except when it comes to COVID

Nike presents itself as a “diverse, equitable, and inclusive employer,” but when it came to its COVID-19 mandatory vaccination policies, it “displayed blatant disregard for its own privacy policies and violated state and federal law,” according to the Health Freedom Defense Fund, which is helping the former Nike employees sue the company.

In February 2022, Nike began terminating employees for failing to demonstrate vaccination against COVID-19, implementing one of the strictest vaccine policies in Oregon where its headquarters are located.

In their complaint, filed Nov. 15 in the U.S. District Court for the District of Oregon in Portland, three former senior employees allege Nike “enforced its mandatory vaccine policy aggressively,” refusing to consider reasonable accommodations for some employees who declined vaccination.

Nike continued its mandatory vaccination policy, begun in October 2021, after it was apparent that the vaccines did not stop transmission of COVID-19 and after the U.S. Supreme Court had struck down the Occupational Safety and Health Administration’s mandate that large employers require their employees to get the vaccine, according to the claim.

The lawsuit alleges Nike fired two of the claimants, Doug Kerkering and Hannah Thibodo, because they had a “perceived disability” — their immune systems did not sufficiently protect them from COVID-19.

“Since the COVID shots do not prevent infection or spread, we contend that Nike viewed the unvaccinated as having inferior immune systems with respect to COVID which prevents them from being able to work. That is a perceived disability protected from discrimination under federal law.”

The plaintiffs proposed accommodations such as testing, masking or working from home, but Nike fired them instead.

According to Street, Rozwadowska applied for religious accommodation and was denied. She appealed, and eventually, the company granted the accommodation — but only after business hours on the date of the vaccine deadline, so she was coerced into getting the shot before her accommodation was approved.

Rozwadowska suffered a severe autoimmune response to vaccination that rendered her unable to work and compelled her to leave the company.

“We are helping the plaintiffs to sue Nike because we want to send a loud and clear message to corporate America that their employees’ rights are not negotiable and that their employees are not disposable,” said Leslie Manookian, president of Health Freedom Defense Fund.

This is not the first time employees sued Nike over its vaccine policy. In August, an Oregon judge ruled that an employee who refused to document his COVID-19 status should have been eligible for unemployment benefits after the company fired him.

It is unclear how many employees Nike fired in total for its vaccine mandate, which the company rescinded last week.

Rolovich filed his lawsuit against WSU in Whitman County Court, alleging “breach of contract, discrimination against religion, wrongful withholding of wages and violation of Title VII of the Civil Rights Act as well as the First and 14th Amendments.”

WSU fired Rolovich and four assistant coaches in October 2021 for failing to comply with the state’s vaccine mandate, even after Rolovich, who is Catholic, applied for a religious exemption.

The university fired Rolovich for cause, which prevented him from collecting the remaining $9 million on his contract.

In April 2022, Rolovich filed a $25 million wrongful termination tort claim against the school — a prerequisite to filing a lawsuit against a state agency.

Rolovich seeks unspecified damages from the university, the governor and the athletic director for lost past and future income, liquidated damages from his employment, punitive damages and legal costs.

WSU Vice President for Marketing and Communications Phil Weiler told The Seattle Times in an email that Rolovich’s lawsuit “is wholly without merit” and that in denying Rolovich’s exemption request, the university enforced the vaccine mandate “in a fair and lawful manner.”

In an interview with The Daily Wire’s BreakAways series in September, Rolovich spoke publicly for the first time about the lawsuit, detailing the “ugly conversations” he said went on with school administrators prior to his firing, ESPN reported.

He told host Allison Williams that he refused to take the vaccine because of the “lack of answers, lack of dialogue” about the effects of the vaccines and because of his beliefs as a Catholic.

Rolovich said when he informed WSU Athletic Director Pat Chun that he planned to request a religious exemption, Chun responded, “We’re not going to believe you, you know, the governor’s not happy with you.”

Rolovich also alleged that the human resources department approved his exemption, but that Chun wrote a memo challenging Rolovich’s right to an exemption.

Responding to William’s question about how losing his job would affect him financially, Rolovich said:

“What about all the people who lost and that were going check-to-check? Those people deserve credit for having conviction in their beliefs too, more than me … firefighters that I know, or police officers, or frontline doctors and nurses, it’s like, those people, in my opinion of what they gave up, was more than mine. I just happened to have a higher-profile job.

“The hypocrisy of the last two years, just all over, it’s just not a real good look on our society.”