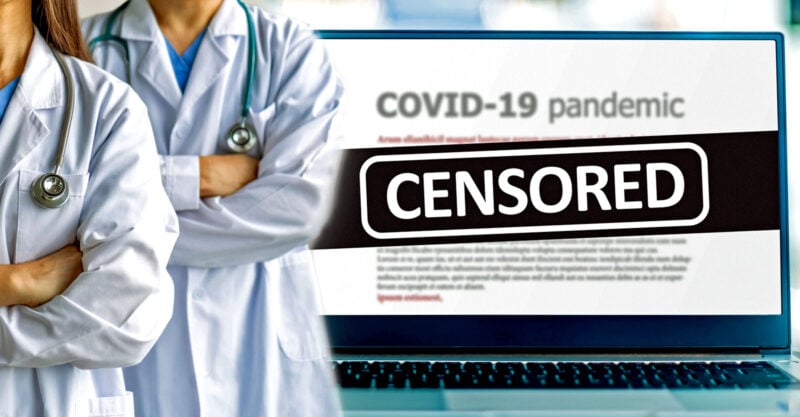 Published in the sociological journal Minerva, “Censorship and Suppression of Covid-19 Heterodoxy: Tactics and Counter-Tactics,” details the experiences of medical professionals who spoke out against public health directives, and how they responded to efforts to suppress them.

As noted by Dr. Robert Malone, himself an outspoken critic of COVID-19 “orthodoxy,” the publication of this article is particularly significant as Minerva is released by “mainstream academic publisher” Springer, a “Q1 journal in its subfield” of sociology with a “decent” research impact factor in the social sciences — meaning that it enjoys a strong reputation within its academic field.

Malone said the article also is notable because one of its authors, Yaffa Shir-Raz, “broke the story with video from the internal meeting at the Israeli ministry of health” on “how they hid many of the key findings regarding the Pfizer mRNA vaccine adverse effects.”

The authors summarized their paper by stating that “the emergence of COVID-19 … led to numerous controversies over COVID-related knowledge and policy” and a “perceived threat from doctors and scientists who challenge the official position of governmental and intergovernmental health authorities.”

Describing this “official position” as an “orthodoxy,” the authors said the supporters of such policies “have moved to censor those who promote dissenting views.”

“Our findings point to the central role played by media organizations, and especially by information technology companies, in attempting to stifle debate over COVID-19 policy and measures,” wrote the authors.

This was accomplished by “widespread use” of censorship and of “tactics of suppression that damaged the reputations and careers of dissenting doctors and scientists, regardless of their academic or medical status and regardless of their stature prior to expressing a contrary position.”

As a result, wrote the authors, “In place of open and fair discussion, censorship and suppression of scientific dissent has deleterious and far-reaching implications for medicine, science, and public health.”

In a post on Substack, Josh Guetzkow, one of the paper’s authors, described how the study was conducted.

According to Guetzkow, the study was “based on in-depth interviews with scientists and doctors around the world who have faced censorship and suppression due to their views on COVID-19.”

Guetzkow said many of these doctors and scientists would be familiar to his audience, although their anonymity was maintained in the published paper.

He added that while “the current stark reality of censorship and suppression is also undoubtedly familiar to most people reading this, it will be news to many outside our circles.”

As a result, wrote Guetzkow, “We felt there would be value in having it documented and discussed in the peer-reviewed academic literature.”

The paper’s key finding is that “study participants reported being subject to a wide variety of censorship and suppression tactics used against them by both the medical establishment and the media, due to their critical and unorthodox positions on COVID-19.”

The “tactics of censorship and suppression” described by the study’s participants included “exclusion, derogatory labeling, hostile comments and threatening statements by the media, both mainstream and social; dismissal by the respondents’ employers; official inquiries; revocation of medical licenses; lawsuits; and retraction of scientific papers after publication.”

For example, participants reported that “mainstream media, which until then had seen them as desirable interviewees, stopped interviewing them and [stopped] accepting opinion pieces from them.”

Shortly after that, they were subjected to denigration by the media, including being disparaged as “anti-vaxxers,” “COVID deniers,” “dis/misinformation spreaders” and/or “conspiracy theorists.”

In addition, “seemingly independent ‘third-party sources,’” such as “fact-checkers” and other doctors, were used by the media to publicly undermine them — and others associated with them.

Online censorship followed for many of the doctors in question, who “reported being censored on social media networks (e.g. Facebook, Twitter, TikTok, YouTube, Google, LinkedIn), including removal of “some of their posts, tweets, videos or even accounts.” This would be “accompanied by a notice claiming they had violated the ‘community rules.’”

Some respondents even reported being “subjected to defamation by their own institution, with the apparent intention to harm their reputation and careers.”

Others “received a clear message from the institution where they worked that they were not allowed to identify themselves with the institution when giving an interview or a testimony or expressing their views — in some cases as a condition of renewing their contract.”

Still others were “dismissed from their institution, or were notified that their contract would not be renewed,” or in other cases, “were summarily dismissed or disqualified from prestigious positions, such as serving on leading health or scientific committees, or editing medical journals, without due process or transparency.”

This often was done in cooperation “with the media,” making sure to “spread the information about those measures through them.”

Official inquiries were another tactic of suppression faced by dissenting doctors, “such as investigating or threatening to withdraw their medical license,” filing lawsuits with significant financial claims against them, or being subjected to police searches of their private clinics.

Other doctors and researchers said their research was “retracted by the journal [which had originally published it] after publication,” while many others had their submitted papers “rejected from journals (often multiple times) without peer review” or with the “review and publication process taking many months longer than typical.”

The paper’s authors said the tactics of censorship reported by the respondents “are consistent with those identified in Jansen and Martin’s … framework on the dynamics of censorship.”

The article also detailed how the doctors and medical professionals who participated in the study fought back and challenged efforts to stifle their views.

According to the study’s authors:

“The respondents noted that their initial reaction to the attacks and censorship was shock and surprise, since for the first time in their lives they felt excluded from the scientific/medical community, attacked by the media and sometimes by their employers, and/or disparaged as ‘conspiracy theorists.’

“Yet, despite the censorship, the personal attacks and defamation, the dismissals, the damage to reputations and the economic price, all respondents nevertheless stated that none of it deterred them, and they decided to fight back, using various counter-tactics.”

Indeed, according to the study, “respondents stated that the censorship and suppression they experienced made them want to fight back and make their voices heard more, on the grounds of freedom of speech and their concern for public health,” and “made them even more determined and eager to expose the information that was being censored.”

Such counter-reactions included disclosing the act of censorship and the information that was censored, “use of alternative channels in order to spread their positions and views,” the “establishment of support networks with colleagues,” and the “development of alternative medical and health information systems … a kind of parallel world to the mainstream establishment.”

Alternative channels listed by the respondents included social media platforms, even if some felt “forced to open ‘secret’ Telegram or anonymous Twitter accounts.”

The study observed that “one participant noted it is absurd that scientists should keep secret Telegram accounts so that the government does not revoke their licenses or damage their reputations.”

In turn, social networks “of fellow scientists, physicians, lawyers and politicians with similar views and politicians” were “used not only to exchange information, but also to receive support and empathy from ‘outsiders’ like them, to make new friends and create a new community.”

Some of these new communities evolved into “new alternative platforms and organizations dedicated to developing and providing health information and medical treatments — including new journals and non-profits, instead of the existing ones, which they claim have failed and disappointed.”

This action, the study noted, “grant[ed] them a sense of hope and a feeling that they are building ‘a new world.’”

Study ‘got a lot right’ — Malone

Commenting on his Substack about the study, Malone said that while he did not personally participate in the study, it nevertheless “summarized much of what I have personally experienced.”

Malone said the study was imperfect and missed some important instances of COVID-19 related censorship, including “the ubiquitous Wikipedia re-writing of personal history,” the censorship of certain books by Amazon, deletions by YouTube of U.S. Senate testimony, and “the professional infiltration and disruption campaigns designed to destroy the American trucker protest movement and the medical freedom movements.”

However, the study “got a lot right,” Malone said, and “has documented that these attacks against medical care providers and medical scientists have happened in an amazingly coordinated fashion all over the world.”

Guetzkow contrasted his team’s paper with another recent paper published in “the flagship journal of sociology, The American Sociology Review,” as an example of so-called “cutting-edge sociology.” The title of that paper was “Online Conspiracy Groups: Micro-Bloggers, Bots, and Coronavirus Conspiracy Talk on Twitter.”