Corporate Vaccine Mandates and Vaccine Passports — Brought to You by BlackRock and Vanguard?

Investment giants BlackRock and The Vanguard Group stand to benefit from their ownership stakes in most of the corporations that imposed COVID vaccine mandates, and in some of the technology firms developing vaccine passports. 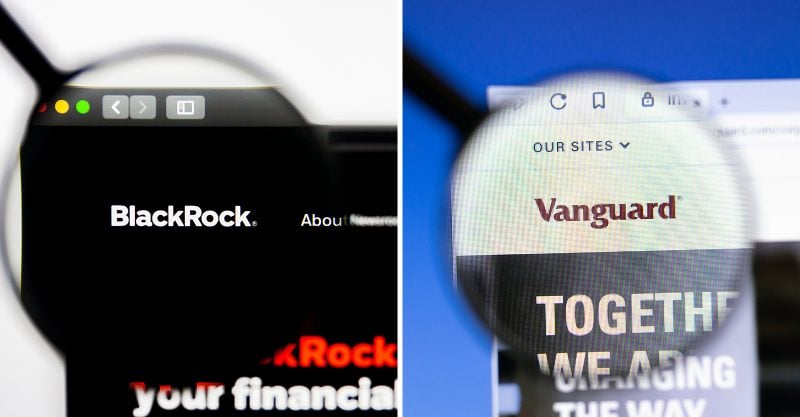 Others, based on guidance issued in 2020 by the Equal Employment Opportunity Commission, left the mandates in place.

Most of the large employers that opted to mandate COVID vaccines for their employees, even though the Supreme Court ruled they didn’t have to, have something in common: BlackRock and The Vanguard Group have ownership stakes in them.

BlackRock and Vanguard, two of the world’s “Big Three” asset managers, also are among the top three shareholders of COVID vaccine makers Pfizer, Moderna and Johnson & Johnson — which means the two investment giants stand to benefit from these companies’ soaring profits and the resulting rise in those companies’ stock prices.

BlackRock and Vanguard don’t just benefit from sales of COVID vaccines. As it turns out, they also have ownership stakes in technology companies developing vaccine passports and digital wallets.

BlackRock: the ‘fourth branch of government’?

To put this figure into perspective, that amounts to more than three-fourths of the U.S. gross domestic product (GDP) and more than triple the GDP of the European Union’s economic powerhouse, Germany.

In an August 2021 article about the two firms, Dr. Joseph Mercola pointed out that, far from the appearance of competition promised by capitalism, BlackRock and Vanguard own significant shares in companies that ostensibly compete directly with each other, such as Google, Apple and Microsoft, or Coca-Cola and PepsiCo.

BlackRock is also politically influential and well-connected, having been chosen by the Obama administration to buy up toxic assets following the 2007-2008 financial collapse.

BlackRock along with other firms also is engaged in a real estate purchasing spree, buying up entire neighborhoods of single-family homes and converting them to rentals, driving up home prices by reducing supply on the marketplace.

BlackRock’s real estate strategy echoes the words of the World Economic Forum: “You’ll own nothing, and you’ll be happy.”

This level of power and influence promoted none other than Bloomberg in 2020 to characterize BlackRock as the “fourth branch of government.”

BlackRock, Vanguard among top 10 stockholders in most companies mandating vaccines

It is unclear to what extent BlackRock and Vanguard are able to dictate the vaccination policies of the companies in which they hold a stake — but what is clear is that the two investment firms are among the top 10 stockholders in most of these companies.

Here’s a rundown of major U.S. employers that continue to mandate COVID vaccines for their employers, and these companies’ relationships with BlackRock and/or Vanguard (all ownership figures are accurate as of this writing):

Comcast, in turn, has required all of its employees to get vaccinated.

What about the two asset management companies, BlackRock and Vanguard?

Of the two, only BlackRock has implemented a vaccine mandate, allowing vaccinated staff to return to the office in July 2021.

Vanguard has not implemented a mandate, but offered a $1,000 incentive to its employees to encourage them to get vaccinated.

BlackRock and Vanguard also are stakeholders in tech companies involved in the development of digital vaccine passports or “digital wallets” and technology that can track and allocate “personal carbon allowances.”

In turn, Mastercard is the fifth largest investor in Doconomy, a Swedish “FinTech” firm that is also heavily involved in the development of the DO Card.

Doconomy, in turn, collaborates with another Swedish “FinTech” firm, Klarna, in providing 90 million customers with “carbon footprint insights” based on their Doconomy transactions. While Klarna is privately held, its top investors include BlackRock and Visa.

While the government of France, which has imposed among the strictest COVID-19 restrictions in Europe and has used ‘vaccine passports’ to shut the unvaccinated out of many public spaces and activities, is Thales’ top shareholder (25.7%), Vanguard is the sixth largest, at 1.31%.

In podcaster Joe Rogan’s interview last month with Dr. Robert Malone — the interview that triggered the exodus of musicians and others from Spotify — Malone described companies like BlackRock and Vanguard as “large massive funds that are completely decoupled from nation states” and that “have no moral core … no moral purpose,” their only purpose being a “return on investment.”

As it turns out, BlackRock and Vanguard — and Moderna — also have ties to Spotify.

Baillie Gifford, a Scotland-based asset management firm in existence since 1909, is the top institutional stockholder (11.60%) in Spotify — and the top stockholder of Moderna (11.29%), the company that carries the largest overall weight in the firm’s portfolio, at $12 billion in holdings.

Baillie Gifford, through its Scottish Mortgage Investment Trust, also maintains a significant stake in Palantir (0.2% of the firm’s net asset value, or NAV).

As reported by The Defender, Palantir developed the Tiberius vaccine allocation planning system operated by the U.S. Department of Health and Human Services.

Peter Thiel, co-founder of PayPal (which terminated the contracts of nonprofits opposed to vaccine mandates) and a Facebook board member, also is a co-founder of Palantir and serves on its board of directors.

In turn, the top stockholders of BioNTech, Pfizer’s partner in the development of its COVID vaccine, include Baillie Gifford (biggest stockholder, 2.69%) and BlackRock (seventh highest, 0.59%), while Vanguard manages the top mutual fund with holdings in BioNTech (0.92%), and Baillie Gifford the ninth biggest (0.23%).

BlackRock and Vanguard are poised to continue expanding— as far back as 2017, Bloomberg predicted that by 2028, these two companies would be managing $20 trillion worth of investments.

The size and scope of the firms’ investments raise questions about how much influence BlackRock and Vanguard can wield over the formulation of corporate policies by the companies in which the two firms are heavily invested.

This ever-growing influence has led some analysts to describe the two firms as “kingmakers,” arguing their growing voting share in an increasing number of corporations would “hand them a de-facto veto on all major corporate decisions by 2040.

To what extent do companies mandating COVID vaccines have the best interest of their employees in mind? Or are these companies implementing policies under the guise of “protecting” employees, when in fact they are more concerned about appeasing major investors?

What else might these companies do, if “encouraged” in some way by major stockholders?

Moreover, do mandatory (or strongly encouraged) vaccination policies reflect the worldview of funds such as BlackRock and Vanguard, and their managers — in much the same way major corporations have embraced purportedly “green” policies which only barely cloak potentially totalitarian restrictions on civil liberties, such as “personal carbon allowances” and digital “vaccine passports”?

The answers may lie, in part, in the words of BlackRock CEO and chairman, Larry Fink.

In his 2022 annual letter to CEOs, Fink wrote that “employees are increasingly looking to their employer as the most trusted, competent and ethical source of information — more so than government, the media and NGOs.”

Fink said, “workers demanding more from their employers is an essential feature of effective capitalism” — an interesting viewpoint given that the BlackRock and Vanguard strategy to control as many corporations as possible, including competing ones, would seem to contradict the principles of capitalism, competition, and a free market.

Fink also warned that “companies not adjusting to this new reality and responding to their workers do so at their own peril.”

In other words, employees and workers of companies that have imposed vaccine mandates should take comfort in such policies, as their employer appears to know what’s best for them — at least according to Fink.