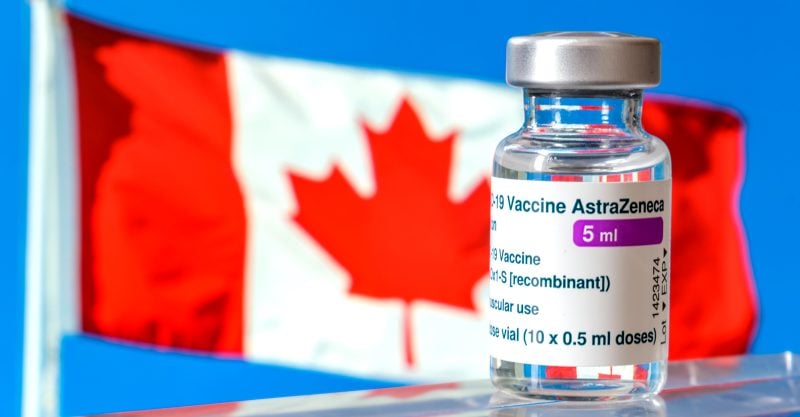 A 50-year-old woman from the Canadian province of Alberta died from a rare blood clot condition after receiving the AstraZeneca-Oxford vaccine, the province’s chief medical officer of health said.

In a statement Tuesday, Dr. Deena Hinshaw said the woman died of vaccine-induced immune thrombotic thrombocytopenia (VITT). It was Canada’s second confirmed death of VITT linked to the vaccine.

Though extremely rare, VITT differs from a typical blood clot because it can cause both cerebral venous sinus thrombosis (CVST) — where veins that drain blood from the brain are obstructed –– and fatal bleeding.

According to CBC News, Canada has reported seven cases of blood clots following immunization with AstraZeneca, but public health officials maintain the benefits of the vaccine outweigh the potential risks.

In a statement Wednesday, Alberta Health said they will continue to administer AstraZeneca’s COVID vaccine. “This does not change the risk assessment previously communicated to Albertans.”

As The Defender reported April 7, European regulators found a “possible link” between AstraZeneca’s COVID vaccine and “very rare” blood clots, but concluded the benefits of the vaccine still outweigh the risks.

The European Medicines Agency (EMA) did not recommend restricting use of the vaccine based on age, gender or other risk factors, but did say cases of blood clotting after vaccination “should be” listed as a possible side effect, according to a statement issued by the agency’s safety committee.

This occurred after more than 20 countries suspended AstraZeneca vaccinations due to reports of deaths and injuries — in most cases related to blood clots — in healthy people who received the vaccine.

AstraZeneca is facing scrutiny after plans were revealed to award its CEO, Pascal Soriot, a large increase in bonuses. Investor advisory groups Pirc, Glass Lewis and Institutional Shareholder Services flagged concerns over efforts to raise the maximum share bonus Soriot can receive under a long-term plan from 550% of his £1.3m base salary to 650%.

The company also plans to increase Soriot’s maximum annual bonus to 250% of his salary from 200%, based on reaching performance targets.

Neville White, head of responsible investment policy and research at EdenTree Investment Management and AstraZeneca shareholder, described the proposed bonus increases as “obscene” and said he would vote against them. “It is obviously tricky, because Pascal is both a hero and an antihero at the moment,” White said.

The vote to increase pay comes as AstraZeneca’s vaccine is linked to numerous cases of rare blood clots, some of which resulted in death, litigation over COVID supply shortages and losses during the first quarter.

Health Canada said the Pfizer-BioNTech vaccine is now safe to give to children ages 12 and up, making Canada the first country in the world to approve giving COVID vaccines to younger age groups. Dr. Supriya Sharma, chief medical adviser for Health Canada, confirmed the approval.

Pfizer released preliminary results from a U.S. vaccine study in March of 2,260 volunteers between 12 and 15 years old, showing no COVID cases among those fully vaccinated. Sharma said this was evidence the vaccine was safe and effective in the 12-15 age group.

As The Defender reported Tuesday, the U.S. Food and Drug Administration is preparing to authorize use of Pfizer’s COVID vaccine in U.S. adolescents 12 to 15 years old by early next week. Pfizer plans to apply for EUA in September to administer it’s COVID vaccine to children between the ages of 2 and 11.

The vaccine is currently authorized in the U.S for emergency use in people 16 and older.