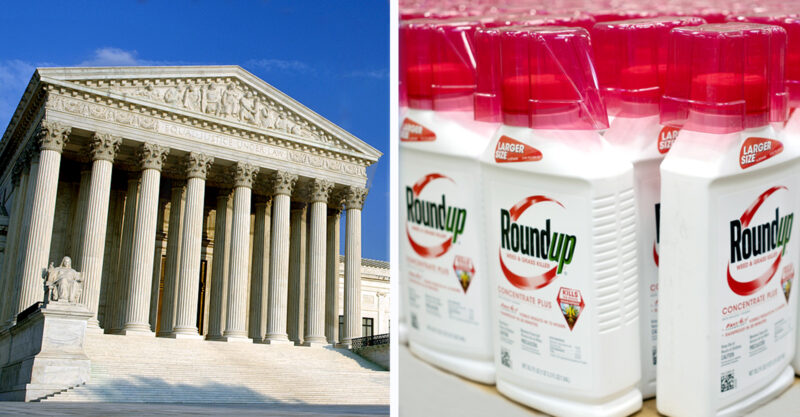 The high court did not explain its decision, which left intact a $25 million ruling in favor of a California man who alleged he developed cancer after using the chemical for years.

The decision marks a major blow to the German conglomerate’s legal fight against Roundup-related cases, and Bayer has set aside more than $15 billion to deal with a wave of U.S. lawsuits linked to the weedkiller.

“Bayer respectfully disagrees with the Supreme Court’s decision,” the company said in a statement.

“The company believes that the decision undermines the ability of companies to rely on official actions taken by expert regulatory agencies,” it added, referring to a 2020 federal finding that Roundup’s active ingredient is not risky.

“This landmark decision by the Supreme Court leaves Bayer with nowhere to go — they now have to face the fact that one of their most famous products causes cancer, as well as causing widespread environmental damage.”

Bayer has been plagued by problems since it bought Monsanto, which owns Roundup, in 2018 for $63 billion and inherited its legal woes around the chemical’s ingredient glyphosate.

The German firm says it has not committed any wrongdoing, and maintains that scientific studies and regulatory approvals show glyphosate is safe.

Glyphosate is nonetheless classified as a “probable carcinogen” by the International Agency for Research on Cancer at the World Health Organization (WHO).

However, the U.S. Environmental Protection Agency (EPA), on its website, says “there are no risks of concern to human health when glyphosate is used in accordance with its current label.”

In a separate court setback for Bayer, the EPA was ordered to reassess the safety of glyphosate on Friday.

The Supreme Court’s decision not to intervene leaves in place Monsanto’s appellate conviction in the lawsuit filed by Edwin Hardeman, who was diagnosed with non-Hodgkin lymphoma in 2015.

In addition to some 30,000 cases about health problems allegations against the weedkiller, Bayer’s own shareholders have taken legal action as well.

Investors are seeking 2.2 billion euros ($2.5 billion) in damages in a German court for losses incurred following its troubled takeover of Monsanto, their lawyers said in January.

The investors accuse Bayer of having “misled capital markets about the economic risks from pending consumer lawsuits in the United States in connection with glyphosate and the herbicide Roundup,” law firm Tilp said in a statement.

Tilp said around 320 investors have submitted complaints, most of them institutional investors such as banks, wealth managers, insurers and pension funds.

Bayer says it has resolved around 107,000 of a total of 138,000 cases related to the herbicide. Bayer’s share price was down just under 2% after the court’s decision on Tuesday.