Former New York Times and Wall Street Journal writer Bari Weiss’ remark that she’s “done with COVID” drew praise from some, and harsh criticism from others. Weiss made the comment during an appearance last week on HBO's "Real Time with Bill Maher.” 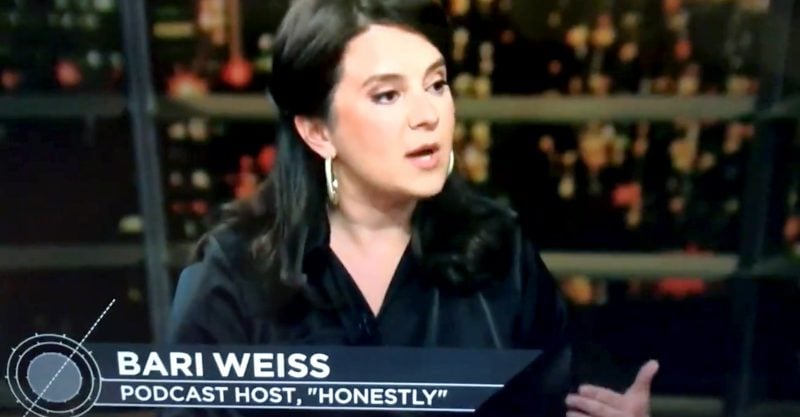 During an appearance on HBO’s “Real Time with Bill Maher,” Weiss told the comedian and political commentator the pandemic countermeasures — implemented at the direction of Dr. Anthony Fauci and others — are “going to be remembered by the younger generation as a catastrophic moral crime.”

“We were told you get the vaccine … and you get back to normal,” Weiss said. “And we haven’t gotten back to normal. And it’s ridiculous at this point.”

“I know that so many of my liberal and progressive friends are with me on this and they do not want to say it out loud because they are scared to be called anti-vax or to be called science-denial or to be you know smeared as a Trumper.

“I’m sorry if you believe the science you will look at the data we did not have two years ago and you will find out that cloth masks do not do anything. You will realize that you can show your vaccine passport at a restaurant and still be asymptomatic and carry Omicron.”

She went on to explain:

“In the past two years, we’ve seen among young girls a 51% increase in self-harm. People are killing themselves. They’re anxious. They are depressed. They are lonely. That is why we need to end it. More than any inconvenience it has been to the rest of us. At this point, it is a pandemic of bureaucracy. It’s not real anymore.”

Weiss’s remarks were met with applause from many of Maher’s HBO audience and others, including political commentator and Fox News contributor Clay

The most impressive thing about Bari Weiss on last night’s Bill Maher is the wild applause after she finishes here. After two years the tides are turning, even for the left leaning people in this country when it comes to covid. Watch this: pic.twitter.com/8DIH3zTibM

Some conservative lawmakers also expressed their support for Weiss’ take on COVID.

This is EXACTLY right.

The decisions that were made by the government in the name of combating Covid will be remembered as causing one of the most catastrophic and destructive times in American history. https://t.co/VAZQqxOOVk

Maher in recent months has expressed a similar opinion about the ongoing lockdowns and vaccine mandates. In September, he said the “liberal media” was “scaring the s— out of people” with their COVID reporting and constant on-screen COVID death counts.

“Seventy percent of Democrats thought it was way, way, way higher than it really was,” Maher said. “Liberal media has to take a little responsibility for that, for scaring the s— out of people.”

Not everyone agreed with Weiss and Maher, including some who are part of the corporate liberal media complex the two denounced for excessive fear-mongering.

ABC’s “The View” hosts Whoopi Goldberg and Sara Haines criticized Maher, accusing him of being dismissive of those at risk.

“I think he’s forgetting that people are still at risk who cannot get vaccinated,” Goldberg said. “Little kids under the age of 5 or people with health conditions. How dare you be so flippant, man?”

“On the same day that Weiss and Maher were … urging us all to move on from the pandemic, 3,506 Americans died from COVID,” Hasan said.