The White House today announced a deal to reopen Abbott Nutrition’s infant formula plant in a bid to ease widespread shortages, but the move won’t address the underlying problem of a market dominated by only three companies. 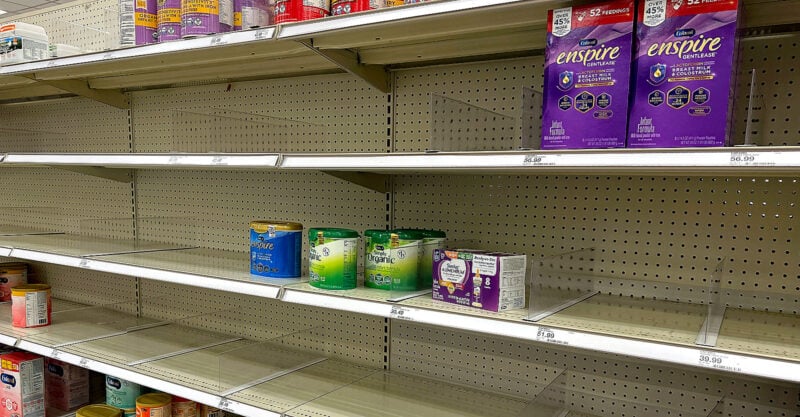 The White House today reached an agreement with Abbott Laboratories to reopen its Michigan infant formula production facility, The Associated Press reported. The plant is expected to open in two weeks.

The White House also said today the U.S. Food and Drug Administration (FDA) will work to expedite imports of infant formula to address the nationwide shortage.

The news comes amid a nationwide shortage attributed to the shutdown in February of Abbott Laboratories’ Michigan plant following a voluntary recall after four consumer complaints related to Cronobacter sakazakii and Salmonella Newport in infants who had consumed formula manufactured in this facility.

The White House on Friday announced that the U.S. Department of Health and Human Services created a new tool for parents that would help them locate baby formula products. However the site left “angry and anxious parents” with long waits and more questions than answers, CNN reported.

Whether or not today’s announcements lead to better results, the nationwide shortage exposed multiple issues related to the infant formula industry, including industry consolidation that created a near-monopoly on production in the U.S. and FDA labeling restrictions that prohibit imports from other countries.

“A recall by one of the industry’s largest manufacturers, persistent supply-chain issues, and a market dominated by only a few players have combined to form what one consumer goods expert calls a ‘perfect storm’ affecting the supply of essential formula to millions of babies across the U.S.”

Forbes predicted the shortage “could last for months,” though today’s announcement from the Biden administration suggests plans are under way to address the shortage sooner rather than later.

A 2011 market analysis by the U.S. Department of Agriculture (USDA) shows these companies accounted for nearly all U.S. formula sales.

The U.S. government, under the USDA’s Special Supplemental Nutrition Program for Women, Infants and Children (WIC), is the largest U.S. purchaser of infant formula.

WIC, which provides services to pregnant women, young mothers and their children, awards contracts to a handful of approved formula companies.

Abbott Nutrition, the food-sector branch of the medical device and healthcare corporation Abbott Laboratories, dominates the market — the company’s sales accounted for roughly 43% of the formula market a decade ago, according to a 2011 USDA report, which contains the latest available figures.

On Feb. 17, Abbott shut down its formula manufacturing plant in Sturgis, Michigan, and voluntarily recalled all Sturgis-produced formula when four infants became ill from bacterial infection and two died after consuming formula produced in the plant.

In October 2021, a whistleblower submitted a report to the FDA alleging numerous health and safety compliance issues at the Michigan plant.

It wasn’t until early 2022 that the FDA conducted a formal inspection of Abbott’s facilities.

After the February shut-down and recall, Abbott conducted its own investigation and concluded, using genomic sequencing of bacteria, that nothing in the Sturgis facility grounds matched the particular strain of bacteria that caused the four infants’ illnesses and deaths.

The FDA and Centers for Disease Control and Prevention told NBC the same thing, though the FDA is continuing to investigate the plant.

On May 11, the FDA said it would allow the company to release formula from the Michigan plant on a “case-by-case basis.”

The FDA was widely criticized for its slowness in responding to and mitigating the baby formula crisis.

FDA regulations for baby formula make it nearly impossible for parents in the U.S. to buy infant formula produced outside the country.

The rules are so stringent that most baby formula produced in Europe is considered illegal in the U.S. due to labeling requirement technicalities.

The issue is this: FDA rules bar formula imports from Europe if the product does not have FDA-compliant nutritional labels. The formula may be perfectly safe and produced in accordance with European standards that are at least as stringent as U.S. health and safety requirements, but it can’t be imported because the FDA has not reviewed and approved what is printed on the package — a costly and time-consuming process for producers.

Today’s announcement signals the FDA will prioritize the review and approval of imports, as part of Biden’s strategy to address the shortage.

“FDA will prioritize review of applications that are most likely to be successful and will get the most formula to U.S. shelves as quickly as possible,” White House press secretary Karine Jean-Pierre said at the White House briefing.

“Companies will need to apply with the FDA, and FDA is prepared to review applications quickly and respond to them rapidly,” she said.

Jean-Pierre promised, “All companies will meet the FDA’s gold standard for quality control, and only safe products will come to America’s shelves.”

A 2019 study in the Journal of Pediatric Gastroenterology and Nutrition found many European formulas do meet or exceed the FDA nutritional requirements.

Fifteen of the 16 European formulas in the study met or exceeded the FDA nutritional requirements.

The European formulas may, in fact, be superior to formulas produced in the U.S.  because the European Union bans certain sugars, such as corn syrup, and requires formulas to have a higher share of lactose, according to an article published last week in The Atlantic.

Parents who don’t care about the FDA’s endorsement and who try to use third-party vendors to buy formula produced in Europe may not succeed — customs agents have been known to capture the product at the border.

‘Baby formula is not food’

Despite the FDA nutrient requirements, some question the nutritional content and value of infant formula.

Writing about the recent shortage, science journalist and author Jennifer Margulis, Ph.D., asked, “Why are we feeding crap to our kids?”

“Baby formula is not food … these soulless companies have only one motivation: to do everything they can to derail a new mom’s ability to breastfeed her baby.

“They spend millions of dollars to sponsor pediatricians, wine and dine doctors and other healthcare professionals, and to do everything they can to dupe moms into believing that formula is just like breastmilk.”

The World Health Organization on April 28 released a report detailing the “shocking extent” of formula milk marketing that “insidiously and persistently” targets moms at the most vulnerable moments of their lives.

These tactics trick moms into thinking formula is just as healthy for their babies as breast milk.

But it isn’t, Margulis said.

Breast milk, not formula, is the optimal food for infants, said Margulis. The Mayo Clinic agrees: “Breastfeeding provides the best nutrition for your baby and is the most widely recommended way to feed a newborn.”

“Baby formula is not food, and it’s not ‘optimal nutrition’ for babies,” Margulis said. “In fact, it’s more like poison.”

Margulis is the author of “Your Baby, Your Way: Taking Charge of your Pregnancy, Childbirth, and Parenting Decisions for a Happier, Healthier Family.”

The book addresses why, despite our state-of-the-art medical technology, the U.S. has among the highest maternal and infant mortality rates in the industrialized world and why American obstetricians give pregnant women who are planning to breastfeed free samples of infant formula.