The Real Reason Fauci Is Stepping Down? ‘His Presence Is No Longer Politically Sustainable.’

While Dr. Anthony Fauci claims he’s stepping down to “pursue the next chapter” of his career, an attorney who has been pursuing legal accountability for Fauci’s actions believes it's because “his presence is no longer politically sustainable.” 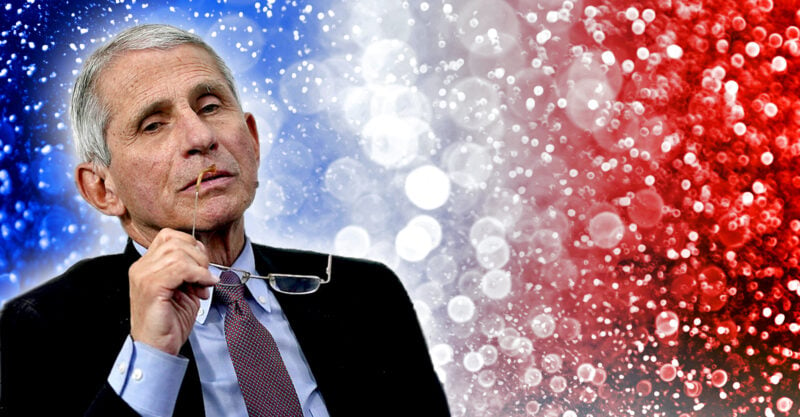 While Dr. Anthony Fauci claims he’s stepping down to “pursue the next chapter” of his career, an attorney who has been pursuing legal accountability for Fauci’s actions believes it’s because “his presence is no longer politically sustainable.”

“The huge pop we are all hearing is the global opening of champagne bottles celebrating Fauci’s departure,” attorney Thomas Renz told The Epoch Times.

Renz is the lead attorney in several major cases brought against the Centers for Disease Control and Prevention (CDC), the Department of Health and Human Services, the Department of Defense, the Biden administration and Fauci himself; regarding forced vaccine mandates, the COVID-19 lockdowns, mask mandates, business closures, alleged hospital negligence, vaccine injuries to military personnel and civilians and efforts to censor the truth about COVID-19.

According to Renz, the whole COVID-19 playbook used by the government and the liberal media to force compliance of restrictive protocols is filled with inaccuracies and inconsistencies.

While Fauci demanded the use of masks and social distancing because these measures were supposed to prevent the spread of the virus, numerous studies and scientists say otherwise.

The CDC admitted in August 2020 that “sustaining social distancing interventions over several months might not be feasible economically and socially.”

Fauci himself has flip-flopped numerous times on the effectiveness of wearing masks. Democrat politicians who imposed mask mandates, lockdowns, quarantines and rules barring indoor personal-care services were frequently caught doing precisely what they forbade others to do.

With the cumulative effect of the flip-flopping, double standards and false information, Renz believes “the public is starting to wake up.”

“They can no longer keep telling us that everything is a crisis,” Renz said. “They can’t say: ‘Hey, we’ve got a new monkeypox pandemic and we need to declare a new emergency. So what if there’s only about 7,500 people affected nationwide.’”

As The Epoch Times reported this month, Dr. Syed Haider suggested that the development of the monkeypox outbreak seems suspiciously identical to the way COVID-19 was introduced to the world.

Data published by the CDC this month, in its “Morbidity and Mortality Weekly Report,” showed there were about 7,500 cases of monkeypox in the United States. Of those, 99% of the cases were in males, and of those, 94 cases reported recent male-to-male sexual or intimate contact.

“They’ve lied and lied and lied and we’ve caught them over and over and over again,” Renz stated. “We the people who believe in truth, science, and freedom fought very hard very early on. Because of that, we were able to bring about skepticism about these jabs. By doing that, there are a number of people in this country who remain unjabbed. If we go by CDC numbers, they say 75% of the population is jabbed. But here’s the problem. Those people are getting COVID again.”

A recent Epoch Times investigation showed vaccinated people are more likely than the unvaccinated in recent months to be a COVID-19 case, hospitalization or death in 25 states.

The CDC admitted in June that people who are vaccinated can get COVID-19 again.

The National Institutes of Health (NIH) said in January 2021 that those who obtain natural immunity after having COVID-19 have long-lasting immunity to the virus.

Despite claims that the unvaccinated are “dangerous” and pose a risk to society by “increasing the opportunity” for the disease to spread through a community, the CDC was also forced to admit in November 2021 that it has no record of unvaccinated people with natural immunity spreading the virus.

A Yale School of Public Health study claimed in October 2021 that unvaccinated people should expect to get reinfected with the coronavirus every 16 to 17 months. Another report claimed people who had COVID-19 are “five times more prone” to getting infected again if they’re unvaccinated.

However, a study published in June in the New England Journal of Medicine showed natural immunity provides greater protection from COVID-19 infection than multiple vaccinations.

During an interview on ABC’s Good Morning America in January, CDC Director Dr. Rochelle Walensky admitted that 75% of vaccinated adults who died of COVID-19 had at least four comorbidities, bolstering claims by skeptics who believed COVID-19 death numbers were inflated.

“What’s happening now is people are wondering why people who have been quadruple vaccinated are getting COVID again and the rest of us are perfectly fine,” Renz asserted. “The reality is, because there was such a militant force being used to make people get these jabs, those who didn’t get them are asking those who did why they are the ones getting sick again.”

“Pfizer can buy as many commercials on FOX News as they want but you can’t lie to people about what they’re seeing with their own eyes. People are waking up. You only have to see a lie once before you have suspicions about the people telling the lies.

“Fauci has gotten nothing but praise and pats on the back for his work; but people like me, Peter McCullough, Peter Corey, and Robert Malone, we’ve been attacked brutally and endlessly for trying to speak up about our concerns. In the meantime, Anthony Fauci has lied over and over again.”

Renz asserted that “one of Fauci’s biggest lies” was when he announced in July 2021 that more than 99% of the people who died were unvaxxed. Around that same time, Renz said they uncovered “Project Salus.”

According to the study, 71% of new COVID-19 cases and 60% of the hospitalizations in this group occurred among the fully vaxxed. The 65 and older population is 80% vaxxed.

Other key Project Salus findings are:

“Fauci outright lied,” Renz insisted. “We caught him because he was being interviewed at the same time. It’s very clear. It’s not disputable that he lied unless he just wasn’t reading the papers that were on his desk, in which case he’s grossly negligent and shouldn’t be in his position anyway. People have woken up to the fact that he’s lying and he’s willing to let people die if it promotes his interests.”

As more and more information continues to come out about people getting sick and dying from the vaccines, and as the government’s COVID-19 narrative continues to collapse, the more politically toxic Fauci becomes, Renz said.

It’s widely expected that Republicans will retake control of the House, and possibly the Senate, in November.

Because of this, Renz believes Fauci’s resignation has less to do with his desire to “pursue the next chapter” in his career and more to do with his need to escape accountability for his incompetence and mismanagement of the COVID-19 outbreak.

Renz also asserts that Democrats want him gone because his “presence is no longer politically sustainable.” They know “they need to get that lightning rod out of there.”

One of the more disturbing stories to emerge about Fauci is his involvement in what has come to be called “Beaglegate.”

The Washington Post reported that an Indianapolis-based firm called Envigo “breeds dogs and sells them as research animals to the pharmaceutical and biotechnology industries.”

Fauci, as head of the National Institute of Allergy and Infectious Diseases, funded these experiments.

White Coat Waste Project reported in October 2021: “Our investigators show that [Dr. Anthony] Fauci’s NIH division shipped part of a $375,800 grant to a lab in Tunisia to drug beagles and lock their heads in mesh cages filled with hungry sand flies so that the insects could eat them alive.”

It has also been reported that some of the dogs had their vocal cords cut so workers would not have to listen to their anguished cries of pain.

The most egregious aspect of this story is the reason the NIH chose to use beagles for these experiments.

According to PETA senior vice president of cruelty investigations Daphna Nachminovitch, it was because “beagles are small and docile. They’re such gentle, loyal dogs, and unfortunately they are so submissive that they’re easy to torture without posing a public safety risk to their abusers,” she told Fox News.

‘He’s got some serious issues’

Considering the cumulative number of deaths associated with Fauci, “he’s got some serious issues,” Renz said.

“You’ve got a guy who has lied and lied about the safety and efficacy of vaccines for two years now. You can tell when he’s lying because his mouth is open. What kind of a person would advocate for babies to get an experimental shot in light of the fact that no healthy children have died from COVID-19? But you have this guy pushing these vaccines on babies. What does this tell you about his character?”

Renz spoke of the “accidental” October leak by the U.S. Food and Drug Administration in July 2021 that showed the numerous side effects of the vaccines they were promoting to be given to children.

The side effects include such things as Guillain-Barré Syndrome, stroke, acute myocardial infarction (heart attack), anaphylaxis, autoimmune disease and death.

According to the World Health Organization, an “adverse event of special interest” is “a pre-identified and predefined medically-significant event that has the potential to be causally associated with a vaccine product that needs to be carefully monitored and confirmed by further special studies.”

Health Feedback, a fact-checking website known to attack any claims critical of the COVID-19 vaccines, also attacked anyone who tried to attribute any deaths to the vaccine or tried to imply that the “adverse events reported following vaccination” demonstrated “that the vaccine caused the events or is unsafe,” Renz said.

“The FDA knew about the side effects and intentionally tried to cover it up. Fauci knew this! There’s no way he didn’t know this!”

The Epoch Times reached out to the NIH for comment.