According to a new pre-print study, boys between the ages of 12 and 15, with no underlying medical conditions, were four to six times more likely to be diagnosed with vaccine-related myocarditis than they were to be hospitalized with COVID. 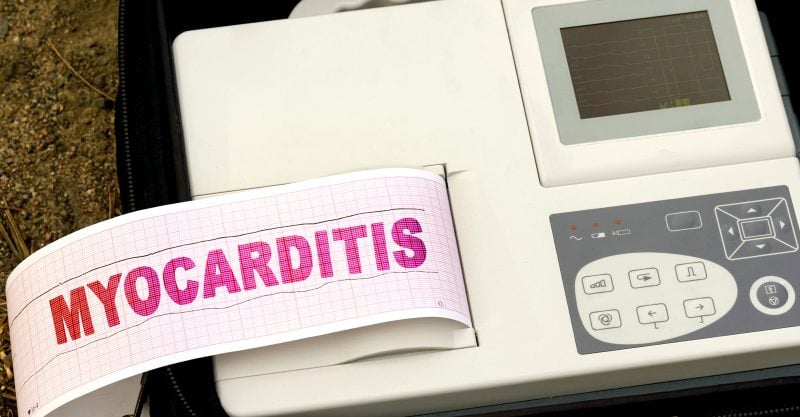 Healthy boys may be more likely to be admitted to the hospital with heart inflammation from the Pfizer-BioNTech COVID vaccine than with COVID itself, according to a new pre-print study.

U.S. researchers found boys between the ages of 12 and 15, with no underlying medical conditions, were four to six times more likely to be diagnosed with vaccine-related myocarditis than they were to be hospitalized with COVID.

To identify children with evidence of cardiac injury, the retrospective epidemiological assessment reviewed injury reports submitted between Jan.1 and June 18 to the Vaccine Adverse Event Reporting System (VAERS) of adolescents between the ages of 12 and 17 who received an mRNA COVID vaccine.

The post-vaccination CAE rate was highest in 12- to 15-year-old boys following their second dose of Pfizer.

Most children who experienced myocarditis had symptoms within days of the second dose of Pfizer’s vaccine, though a similar side-effect was seen with Moderna’s COVID vaccine. About 86% of the boys affected required hospital care, the authors said.

“Further research into the severity and long-term sequelae of post-vaccination CAE is warranted,” the researchers concluded. “Quantification of the benefits of the second vaccination dose and vaccination in addition to natural immunity in this demographic may be indicated to minimize harm.” The study has yet to be peer-reviewed.

In a Tweet, Høeg said the CDC’s estimates of myocarditis in boys and young men are outliers — Israel and Canada are reporting similar rates of post-vaccine myocarditis at 1 in 6,000.

It’s important to note, it’s the CDC’s estimates of myocarditis in boys & young men that have been the outliers. Israel & Canada reporting similar rates of post-vax myo to the 1/6,000 from our study. TY @_lewisy for the Israeli data ⬇️ https://t.co/pKDyOjdLTu https://t.co/XM0wMZG4An pic.twitter.com/CgTtUf3KmQ

Høeg said b​​ased on previously reported Pfizer rates, rates of myocarditis after vaccination with Moderna could be significantly higher at 1 in 2,288 boys between the ages of 12 and  17.

And those Moderna rates are predicted to be even higher in the 12-17 year old boys:https://t.co/X8uqLCADGD

As The Defender reported Sept. 7, a report released by Public Health Ontario showed the incidence of heart inflammation following mRNA vaccination was significantly more prevalent in young people, and higher after the second dose.

According to The Guardian, Saul Faust, professor of pediatric immunology and infectious diseases at the University of Southampton, said the findings appeared to justify the cautious approach on vaccines for teens taken by the UK’s Joint Committee on Vaccines and Immunisation (JCVI).

The JCVI did not recommend vaccinating healthy 12- to 15-year-olds against COVID, but referred the matter to the UK’s chief medical officers who said they would consider other factors in recommending the vaccine.

A single dose was recommended due to the potential risks of myocarditis associated with COVID vaccines.

In a letter to ministers, the medical officers warned missing face-to-face school had a “massive impact” on children, both physically and emotionally.

The officials said it was not possible to quantify to what extent vaccination would reduce school disruption. They acknowledged current COVID vaccines are less effective against the Delta variant compared to previous variants.

Estimates also suggest more than half of secondary school age children may already have been infected and acquired natural immunity.

But they said “on balance,” the benefits in reducing disruption and the harm it caused provided “sufficient extra advantage” to warrant extending vaccination to healthy children in this age group.

The vaccine is likely to be given in schools, and parents will be asked to give consent.

However, if a child and parent are of opposing views and the child is considered competent to decide, the child will get the final say.

It will now be up to ministers whether to accept the recommendation of the UK’s four chief medical officers. Norway also announced it will recommend only one jab due to the risk of myocarditis in teens.

According to the most recent data from VAERS there have been of myocarditis and pericarditis in 12- to 17-year-olds, with 462 cases attributed to Pfizer’s vaccine.