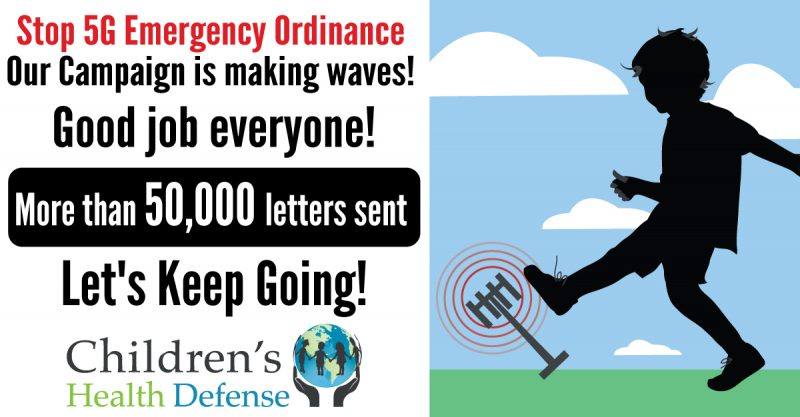 Thank you for taking action!

Over 50,000 letters were sent to municipalities in the US asking them to pass an emergency ordinance to stop the deployment of 5G during the quarantine. Thank you for taking action and using our click to Action system to send the letter. The campaign continues, please keep sharing.

This campaign is making waves – many mayors, city council members, and city managers responded. Some tried to deflect but others are interested in pursuing this avenue or at least using the arguments we made to slow down the wireless companies. We know mayors have contacted their attorneys and they confirmed that this measure works and our arguments are legally valid.

This campaign is helpful to municipalities as the wireless industry is bullying them. Our letter provided them with a legal way to fight back. The municipalities are busy with the COVID-19 epidemic and do not have the time or resources to deal with the 5G applications, but the wireless industry could not care less. In an effort to force municipalities to keep the “shot-clock” timeline despite the emergency situation, the Wireless Infrastructure Association (WIA) met with the FCC and sent a letter saying:

“[Notwithstanding] the coronavirus crisis, WIA hopes that telecom-related projects can be prioritized [by the FCC], so even in a shorthanded environment, local governments can meet their statutory obligations, and these applications can be received, reviewed, and processed in a timely manner.”

The municipalities are taking action to stop the wireless companies’ aggression and these letters have encouraged them to take action.

Please continue to share our Click to Action campaign and get others to send a letter. Follow-up with your municipality and keep putting on the pressure. Even if they will not pass an ordinance, the massive amount of letters they are receiving will likely impact them at least not to rush with the applications. Our letters give them a tool with which to fight back.

How to Respond to the Municipalities

Many people have forwarded us the response emails they’ve received. Below are some explanations as to how to respond:

The Municipality’s Response: Our state 5G bill preempts our power to pass such a measure.

As a result of the ongoing aggression by the wireless industry, in some cases, Mayors / city managers / city attorneys prefer not to deal with this issue and risk litigation. It is easier for cities to say “we are preempted” and do nothing. But in most states, such a claim may be inaccurate.

Twenty-something states adopted 5G laws that significantly limit municipal power. These laws are in line with the FCC regulation from September 2018 that limit municipal power to regulate 5G/Small Cells installations. Some state bills are even more restrictive than the FCC regulations. These laws are mostly written by the wireless industry, which makes them quite similar. We reviewed several of these laws and didn’t see a clause that preempts the municipal emergency powers.

Considering the FCC & the Department of Homeland Security statements in our letter – there is a good argument to be made that these laws do not preempt the emergency ordinance we are proposing. This claim was confirmed by an attorney who represents cities under a statewide 5G Small Cells law. His letter confirms our interpretation.

Even if a 5G state law contains a clause regarding an emergency situation, a case can still be made that nevertheless municipalities may still be able to claim they can withhold the approval process and deployment of 5G/small-cells and any other antenna installations.We think there is a good legal argument to be made that the pandemic emergency situation can be used to stop the shot clock for approval of cell towers and the installation of approved new towers.

The Municipality’s Response: The telecom companies will sue us if we pass such an ordinance.

Adopting such a measure may indeed expose the city to possible litigation. The telecom industry certainly has the money to try. However, considering the FCC & the Department of Homeland Security statements which our letter provides, the municipality, if sued, will have a strong counter-argument. There is a good case to be made that these laws do not preempt the emergency ordinance we are proposing. Furthermore, industry may encounter difficulties in pursuing a lawsuit because some courts are currently closed.

The Municipality’s Response: We do not have 5G applications.

Unfortunately as a result of the wireless industry’s efforts to create confusion, many of our decision-makers and elected officials do not fully understand what 5G is and the wireless industry is taking advantage of it. For instance, many of our elected officials do not understand that 5G means “small cells” installation and that most of these installations are 4G antennas. Explain to them that they should check for “small cells” or 4G antennas’ applications rather than for 5G applications. Very likely they will find a few.

An Alternative Solution: Your Municipality Can Slow Down the 5G small cells Application Approval’s Process and Deployment Without Passing an Emergency Ordinance

You can suggest a simpler solution to your municipality. Your municipality can slow down the 5G Small Cell applications’ approval and deployment during the quarantine without passing an emergency ordinance. Instead they can simply not approve the applications, using the FCC and the Department of Homeland Security language. They can also send a letter to the telecom companies using the FCC & Dept. of Homeland Security language and informing them that only maintenance and repair of existing installations is allowed.

Thank You for Taking Action and Keep Up the Pressure!

If you still didn’t send the letter you can send it below or read the original post: