Whose Conspiracy Is It, Mr. Johnson?—CHD’s Response to FCC General Counsel’s Op-Ed in the Washington Post 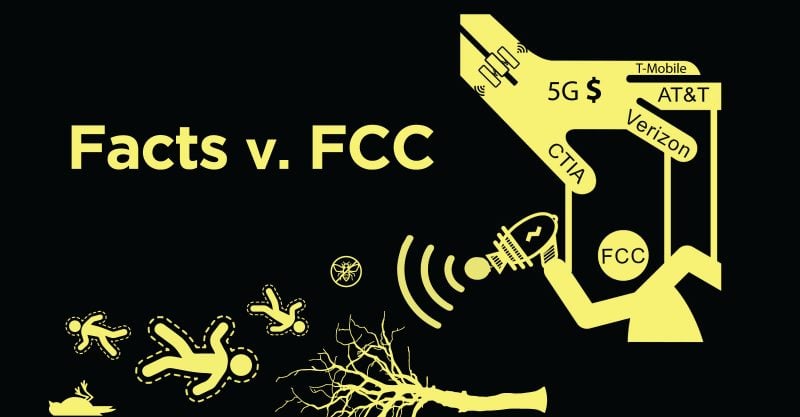 The Washington Post published a June 4, 2020 Op-Ed “5G conspiracy theories threaten the U.S. recovery” by Thomas M. Johnson, Jr., General Counsel for the Federal Communications Commission (FCC). Mr. Johnson employed fallacious straw-man arguments by dramatically pointing his finger at the wrong target in order to avoid the real problem: his client, the FCC, and those like the Washington Post’s owner, Jeff Bezos, who is heavily invested in 5G. All Mr. Johnson really did is confirm Harvard University’s Center for Ethics’ publication showing that the FCC is a “Captured Agency”  that has “overlooked, sacrificed, or raided” “consumer safety, health, and privacy, along with consumer wallets,” “due to unchecked industry influence.”

You bring in a straw-man to mercilessly thrash in order to shift attention from the opponent’s real argument. Mr. Johnson resorts to this tactic because he knows the FCC and its industry masters cannot prevail on the merits. A proper argument would be “stop worrying about 5G, here is the latest science to prove that 5G is safe!” But he cannot do so because the FCC lacks even a single study showing 5G is safe.

The op-ed claims: “Conjectures about 5G’s effect on human health are long on panic and short on science.”  The “conspiracy” rhetoric is a basic industry-captured agency tactic to distract from the truth. It is the FCC and telecoms who are panicking, and they have a good reason.

Children’s Health Defense (CHD) recently sued the FCC after its December 2019 decision refusing to update their 25-year-old “health” guidelines regarding wireless radiation health effects. The FCC guidelines are “thermally based” in that they protect only from temperature change in tissue from 30 minutes of acute exposure. The FCC, like Mr. Johnson, claims there is “no evidence” of harm from long-term exposure to non-thermal effects. They obviously did not bother to review the thousands of studies and reports that were submitted to the FCC showing clear evidence of profound adverse effects in levels in order of magnitude lower than the FCC’s “safe” levels. The FCC also ignored “human evidence” in the form of testimony by people who have been gravely injured or lost family members from exposure at FCC-authorized levels.

… 27 years ago the EPA wrote the FCC that the guidelines are “flawed,” and has continued to argue that they do not protect the public health.

The FCC admits it has no expertise in these health issues, and so it relies on its “sister agencies” to decide what its standards should be. There’s a problem: a host of sister agencies’ (including the Air Force, Navy, NASA, the EPA and National Institute of Environmental and Health Sciences (NIEHS)) own studies and/or reports have confirmed there are significant risks, effects and/or harms from wireless. The U.S. Access Board and National Institute of Building Sciences (NIBS) found that emissions within FCC guidelines can lead to Electromagnetic Sensitivity (Microwave/Radiation Sickness) and that it is a disability under the ADA. The FCC often mentions the EPA as a “sister agency” on which it relies in order to give credibility to its guidelines. However, it omits mentioning that 27 years ago the EPA wrote the FCC that the guidelines are “flawed,” and has continued to argue that they do not protect the public health. In 2014, the Department of Interior stated that the Guidelines are “30 years out of date and inapplicable today” and cause harm to the environment. In December of 2018, NBC reported that the U.S. government believes that the “mystery sickness” of the diplomats in Cuba was caused by Microwave-based technologies. A paper that was published in the MIT Press provides the scientific evidence showing that indeed RFR is the likely cause.

Mr. Johnson also failed to mention the recent $25 million study of cell phone radiation by the National Toxicology Program (NTP), which found “clear evidence of cancer”  and DNA damage. The NTP is the federal government expert agency responsible for evaluation of toxins. Its determinations are considered to be the scientific gold standard. Another study, the Ramazzini Institute study,  a 6 million euro study, confirmed the results of the NTP. In 2011, the World Health Organization’s (WHO) International Agency of Research on Cancer (IARC) classified RF radiation as possibly carcinogenic to humans (Group 2B),  explaining that while there is epidemiological evidence, more animal studies are needed. The NTP and the Ramazzini studies have now provided the “missing link” for IARC to re-classify RF radiation as a human carcinogen (Group 1).

The 1,479-page BioInitiative Report is an extensive scientific review of 3,800 studies. The report concludes that bio-effects from cell phones, cell towers, Wi-Fi and smart meters can occur within minutes of exposure. The BioInitiative report was authored by 29 leading scientists from 10 countries, with 10 MDs and 21 PhDs. The Co-Editor of the report is Professor David Carpenter, MD., the Director of the Institute for Health and Environment, University of Albany, a collaborating center with the World Health Organization. He is also one of the Petitioners in the CHD case.

Numerous other scientists and doctors wrote the FCC urging the agency to develop biologically based guidelines such as the American Pediatric Association and the California Medical Association which  passed a resolution calling on the FCC to “implement new safety exposure limits for wireless devices to levels that do not cause human or environmental harm based on scientific research.”

The FCC should acknowledge that its entire emissions standards framework is invalid. If the Commission is truly interested in “science” it should develop biologically based guidelines that address long term exposure to pulsed and modulated signals, and nonthermal levels of Radio-Frequency Radiation (RFR). Instead, it willfully ignores conclusive and massive scientific evidence and, just like Mr. Johnson’s op-ed, resorts to empty rhetoric.

… the FCC is willing to let people get sick and/or die just so its industry masters can spread more of their poison.

The human cost for FCC failure

The FCC’s obstinate 25-year failure to recognize these risks carries a hefty price of widespread sickness and death. Other petitioners in CHD’s case include two physicians who constantly see the sickness in their clinic, parents of four children who developed radiation sickness; and a mother who lost her son to a Glioblastoma brain cancer. This is the same type of brain cancer that killed Ted Kennedy, John McCain, and Joe Biden’s son, Beau Biden.

On April 19, 2020 Children’s Health Defense filed a letter to the FCC opposing the Commission’s proposed Over The Air Receiving Devices (OTARD) rule expansion which would allow 5G cell towers on private homes. The letter was signed by 15,090 people, 6,231 of whom declared that they or their children have become sick from wireless radiation. Approximately 2,500 people offered additional comments that gave voice to people’s pain, their loss of family members, homes, and their inability to live in this increasingly wireless world. This glaring and tragic personification of pain and loss in the face of damage from 5G, cell towers, smart meters, cell phones, Wi-Fi and other wireless devices makes it clear Mr. Johnson’s strident, unprincipled screed is merely an effort to hide extraordinary cruelty: the FCC is willing to let people get sick and/or die just so its industry masters can spread more of their poison.

In 2013, the cities of Boston and Philadelphia joined the calls to the FCC to update its guidelines, and asked the Commission to pay particular attention to people and children who have already been sickened by wireless emissions and need accommodations that will allow them to avoid non-consensual exposure. The FCC ignored their pleas.

These are the federal agencies, local jurisdictions, individuals, scientists and doctors behind what Mr. Johnson’s refers to as “5G conspiracy theories” that threaten the economy. This background makes Mr. Johnson’s rhetoric especially disturbing. It resembles that of the Nazis when they blamed the Jews for being a threat to Germany’s recovery and of Sen. Joseph McCarthy in the 50’s when he conducted a witch hunt of communists who threatened the U.S. security. Have we learned nothing?

The FCC actions and Mr. Johnson’s dangerous rhetoric leave no doubt that it has no real interest in meaningfully reviewing its guidelines or protecting the public’s health. These false guidelines have enabled uncontrolled wireless growth, and now the FCC is aggressively forcing 5G. The FCC is cheerleading interconnecting 20 billion more devices wirelessly, the deployment of 50,000 satellites, 1,000,000 ground antennas to connect with the satellites and 800,000 cell towers on our streets and neighborhoods. In many cases, these 5G “small” but powerful cell antennas are installed a few feet away from people’s homes and children’s bedrooms and the harms are already happening. CHD is in touch with many families who got sick within days of the installation of one of these 5G antennas near their homes.

… the city of Boston wrote the FCC … the public does not believe that the FCC’s RF exposure standards are safe nor based on science.

Inaction is not an option

Over 230 scientists including the world’s leading scientists on RF-EMF (of a distinctively different caliber than the industry-funded mercenaries on which the FCC relies), signed the 5G Appeal, calling for a moratorium on 5G. They wrote that wireless radiation is: “proven to be harmful to humans and the environment” and that “effects include increased cancer risk, cellular stress, increase in harmful free radicals, genetic damage, structural and functional changes of the reproductive system, learning and memory deficits, neurological disorders, and negative impacts on the general well-being of humans” and concluded that a pan-epidemic of sickness from wireless already exists and “Inaction is a cost to society and is not an option anymore.”

The FCC has made it clear that the cost to society is not its concern. Since 1996, the FCC has blocked efforts against wireless deployment based on health concerns. It is no longer even trying to disguise its bullying tactics to strip long-cherished state and local zoning measures, and it even blocks efforts by those who are already sick to obtain accommodation for their disability.

On June 17, 2020 the city of Boston wrote the FCC, “Boston believes that the concerns of the public are real and that the Commission has done a disservice to itself, local government, consumers, and even the wireless industry in failing to understand and respond to the broadly shared mistrust of the safety of RF emissions. The public does not believe that the FCC’s RF exposure standards are safe nor based on science.”

Now that the truth the FCC has tried to keep in the dark is coming to light, Mr. Johnson tries to use the few who connect 5G with Covid-19 to condemn all who object to 5G. This desperate maneuver to distract merely reveals the actual conspiracy that is afoot: the industry and FCC are contriving against the public and trying to suppress all dissent. The conspiracy hunt should begin and end with Mr. Johnson’s agency.