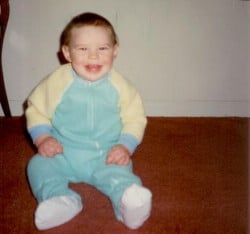 I want truth, effective treatments and justice for my son and others.

My son Jackson was born with 9 and 10 Apgar scores. He met all milestones until 16 months old. He had 25 words, was putting two words together, and had the beginning of pretending skills. He was a bright-eyed toddler who could tell the difference between a Concorde and a regular airplane and delighted in watching them from our home near Dulles Airport in Northern Virginia.

When Jackson was diagnosed with Pervasive Developmental Disorder at 20 months, he’d just experienced a four-month regression beginning days after his August 9, 1990 shots. He received the HiB vaccine (with 25 mcg. of mercury) on July 25, and just two weeks later, he received the DT (with 25 mcg. of mercury), Oral Polio, and Measles-Mumps-Rubella. In the span of two weeks, he’d received 50 mcg. of mercury, three dead viruses and four live viruses. The total amount of mercury he’d received in vaccines by 16 months of age was 139 times the EPA exposure level for an adult!

The downfall in his skills was swift and cruel. Body rashes and fever would come and go. Constipation, then diarrhea, ravaged his body. In the first two months after the shots, his eyes told us he was scared of what was happening to him. He would cry in fear when projectile vomiting. He also asked us “why” with his eyes. He could still understand language although he was no longer speaking. After two more months, his eyes neither asked nor told us anything, having become totally void of any communication. His expressive and receptive language skills were gone.

My outgoing, social, verbal child was a shell of his former self. Jackson’s body was still here. But his personality – what made Jackson his smart, loving self – was gone. The sick body replaced the well one. The sleeping child was replaced by one who would awake startled after a few hours and not go back to sleep all night. The happy child was replaced by an unhappy one. The child who at one time didn’t miss a thing and was the life of the room became distant and preferred to be alone. The one who was developmentally ahead of the crowd began making strange noises and exhibiting odd behaviors. The child God gave us was gone forever.

The emotional toll has been horrible for our family. Our child was stolen. We fight our sadness every day on very little rest and are mentally drained. We worry: can we teach him all he needs to know? What is the next medical intervention we need to do? Will we be able to pay for it? Will he be safe? And worst of all, what will happen to Jackson when we are both gone?  The mental stress it creates every day is immeasurable.

What is measurable is the financial toll that this medical crisis takes on families. Many must live on one salary because one parent must stay home. Many don’t have insurance or the insurance doesn’t cover the medical needs. Autism affects the entire family.

How could this happen in America? How could my government let pharmaceutical companies run to the bank with no liability for injuries while once healthy children suffer from debilitating injuries caused by vaccines? How could we allow the health and well-being of hundreds of thousands of children to be sacrificed in the war against infectious disease? Have we replaced acute childhood illnesses with lifelong diseases?

Critical vaccine safety studies are not being done and pre-and post-market monitoring of vaccines is lackadaisical at best. Agency and pharmaceutical whistleblowers are reporting that their vaccine studies are fraudulent.

After numerous medical interventions and consulting with dozens of doctors over the years, it’s my belief that the vaccinations given to my healthy son at his 16- month well-baby check-up are what sent his immune system into a downward spiral. I will regret that moment for as long as I live and work every day to make sure it doesn’t happen to another child. I do what I do so others can get critically needed information to make responsible decisions for themselves and their families to avoid a fate like my son’s and hundreds of thousands like him.